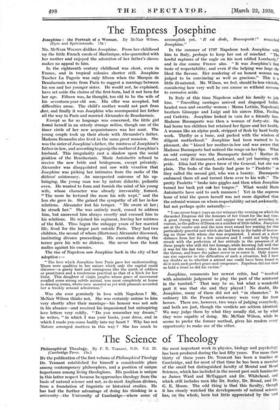 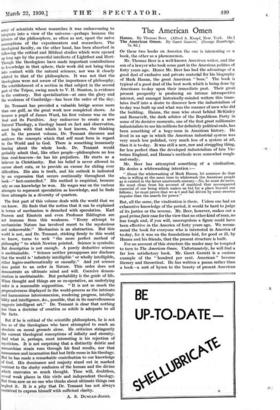 The Science of Theology

Philosophical Theology. By F. R. Tennant, D.D. Vol. II. (Cambridge Press. 15s.) BY the publication of the first volume of Philosophical Theology Dr. Tennant established for himself a considerable place among contemporary philosophers, and a position of unique importance among living theologians. His position is unique in this latter respect because he approaches theology from the basis of natural science and not, as do most Anglican divines, from a foundation of linguistic or historical studies. He his had the further advantage of doing his thinking in a uftiversity—the University of Cambridge—where some of' the most important work in physics, biology and psychology has been produced during the last fifty years. For more than thirty of these years Dr. Tennant his been a teacher at Cambridge, and for most of that time he has been a member of the small but distinguished faculty of Mental and Moral Sciences, which has included in the recent past such luminaries as James Ward and McTaggart and Dr. Whitehead, and which still includes men like Dr. Sorley, Dr. Broad, and Dr. G. E. Moore. The odd thing is that this faculty, though it has closely watched the developments of natural science, has, on the whole, been but little appreciated by the vast , army of scientists whose researches it was endeavouring to integrate into a view of the universe—perhaps because the labours of the philosophers, as often- as not, upset the naive assumptions of the experimenters and researchers. The theological faculty, on the other hand, has been absorbed in following the critical and Biblical studies which were opened up long ago by the powerful intellects of Lightfoot and Hort. Though the theologians have made important contributions to knowledge in that, sphere, their work did not bring them into contact with the natural sciences, nor was it closely related to that of the philosophers. It was not that the theologians were not aware of the importance of philosophy. The establishment of a section in that subject in the second part of the Tripos, owing much to V. H. Stanton, is evidence to the contrary. But specialization—at once the glory and the weakness of Cambridge—has been the order of the day.

Dr. Tennant has provided a valuable bridge across more than one gulf, as the great work now completed shows. As became a pupil of James Ward, his first volume was on the Soul and its Faculties. Any endeavour to create a new Natural Theology, a theology based on fact and observation, must begin with that which is best known, the thinking self. In the present volume, Dr. Tennant discusses and analyses the concepts which that self must form in regard to the World and to God. There is something immensely bracing about the whole book. Dr. Tennant would probably admit that, like other people—philosophers no less than coal-heavers—he has his prejudices. He starts as a believer in Christianity. But his belief is never allowed to excuse short cuts, or to provide an excuse for sliding over difficulties. His aim is truth, and his outlook is indicated by an expression that occurs continually throughout the book—" fact-controlled."_ His method is empirical, because only so can knowledge be won. He wages war on the various attempts to represent speculation as knowledge, and he finds these attempts in a diversity of quarters.

The first part of this volume deals with the world that we can know. He finds that the notion that it can be explained in terms of mechanism is drenched with speculation. Karl Pearson and Einstein and even Professor Eddington are not immune from this weakness. " Every attempt to mechanicize Nature has involved resort to the mysterious and unknowable." Mechanism is an abstraction. But this world is not, and Dr. Tennant, sticking firmly to this world we know, turns to seek " the more perfect method of philosophy " to which Newton pointed. Science is symbolic. But description is not enough. A purely deductive science is unobtainable. " Science neither presupposes nor discloses that the world is ' infinitely intelligible ' or wholly intelligible, either logico-mathematically or causally." And yet science does point to an order in Nature. This order does not demonstrate an ultimate mind and will. Coercive demon- stration is unobtainable. But probability is the guide of life. When thought and things are so co-operative, an underlying order is a reasonable supposition. " It is not so much the progressiveness displayed in the world-process as the intricate and harmonious interconnexion, rendering progress, intelligi- bility and intelligence, &c., possible, that in its marvellousness suggests intelligent art." Dr. Tennant is clear that nothing less than a doctrine of creation ex nihilo is adequate to all the facts.

But if he is critical of the scientific philosophers, he is not less so of the theologians who have attempted to reach an absolute on moral grounds alone. He criticizes stringently the current theological conceptions of infinity and eternity. And what is, perhaps, most interesting is his rejection of mysticism. It is not surprising that a distinctly deistic and monarchian strain runs through his final results, nor that immanence and incarnation find but little room in his theology. But he has made a remarkable contribution to our knowledge Of God. His dominance and majesty stand out in marked contrast to the slushy confusion of the human and the divine which enervates so much thought. Time will, doubtless, reveal weak places in this virile and independent theology. But from now on no one who thinks about ultimate things can neglect it. It is a pity that Dr. Tennant has not always contrived to express himself with sufficient clarity.