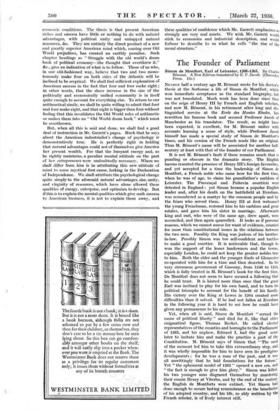 The Founder of Parliament

NEARLY half a century ago M. Bemont wrote for his doctor's thesis at the Sorbonne a life of Simon de Montfort, which won immediate acceptance as the standard biography, but was not translated. Much work has been done since then On the reign of Henry III by French and English scholars, and now M. Bemont, in his retireinent after: long and dis. tinguished service at the Ecole des Mutes Etudes, hag rewritten his famous book and secured Professor Jacob of Manchester as his translator. The result, as might have been expected, is excellent, for M. Bemont unites with accurate learning a sense of style, while -Professor Jacob himself has made a special study of Simon de Montfort's times, and his version of the French reads like an original. Thus M. Bemont's name will be associated for another half- century at least with that of the founder of our Parliament.

It is not M. Bemont's fault if there remains much. that is puzzling or obscure in the dramatic story. The English barons resented the presence of Henry. III's foreign favourites, and yet accepted for a time the leadership of Simon de Montfort, a French noble who came here for the -first time, when- he was of age, to claim his grandfather's earldom of Leicester. The Provençal -and Poitevin courtiers were detested in England : yet Simon became a popular English leader- and, -after his death on the battlefield at. Evesham, was remembered as a martyr by the common people and by the friars who served them. Henry III at first welcomed the young Frenchman, restored him to his earldom and great estates, and gave him his sister in marriage. Afterwards king and earl, who were of the same age, drew apart, were reconciled, and then again quarrelled. It looks as if personal reasons, which we cannot assess for want of evidence, counted for more than constitutional issues in the -relations between the two men. Possibly the King was jealous of his brother- in-law. Possibly Simon was too self-confident and tactless to make a good courtier. It is noticeable that, though he won the support of the lesser landowners and the towns, especially London, he could not keep the greater nobles true to him. Both the elder and the younger Earls of Gloucester co-operated with him for a time and then deserted. In his very strenuous government of Gascony, from 1248 to 1254, which is fully treated in M. Bemont's book for the first time, De Montfort does not seem to have secured a following that he could trust. It is hinted more than once that the great Earl was inclined to play for his own hand, and to turn his political triumphs to account for the benefit of his family. His victory over the King at Lewes in 1264 created more difficulties than it solved. If he had not fallen at Evesham in the following year it is hard to see how he could have given any permanence to his rule.

Yet, when all is said, Simon de Montfort " served the cause of political liberty " and died. for it, like that other enigmatical figure, Thomas Becket. He called elected representatives of the counties and boroughs to'the Parliament of 1205, and his nephew, Edward I, had the good sense later to 'imitate him and make the practice a part 'of the Constitution. M. Bernont says of Simon that " The need of the moment led him to take this extraordinary step, and it was wholly impossible for • him to have seen its- prodigious developments ; for he was a man of the past, and it was all unwittingly that he laid foundations for the future." Yet " the ephemeral model of 1265 " opened a new era, and " the fact is enough to give him glory." Simon was killed, his two younger sons disgraced themselves by murdering their cousin Henry at Viterbo, and by the end of the century the English de Montforts were' extinct. Yet Simon had done enough to secure lasting remembrance as the benefactor of his adopted country, and his life, so ably written by the Preach scholar, it. of lively interest still.