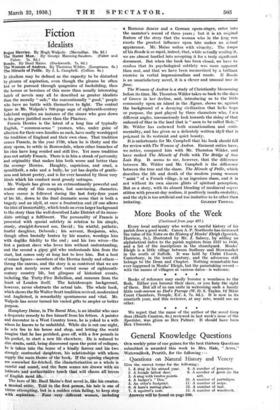 IF idealism may be defined as the capacity to be disturbed by gleams of aspiration, even though the gleams be often lost or be pursued through quagmires of backsliding, then the heroes or heroines of this more than usually interesting batch of novels may all be described as greater idealists than the morally " safe," the conventionally " good," people who have no battle with themselves to fight. The central figure in Mr. Walpole's 700-page saga of eighteenth-century Lakeland supplies an -instance of the sinner who goes down to his grave justified more than the Pharisee.

Francis Herries is the latest of .6 long line of typically English, " common-sense " yeomen, who, under guise of affection for their own families as such, have really worshipped the tradition of England and their own class. That tradition causes Francis, in •the year 1780, when he is thirty and the ,story opens, to settle in Borrowdale, where other branches of his clan have long resided and still live. Yet mere tradition does not satisfy Francis. There is in him a streak of perversity nd originality that makes him both worse and better than the average Herries. Haughty, capricious, and cruel, a spendthrift, a rake and a bully, he yet has depths of gentle- ness and latent poetry, and is for ever haunted by those very ideals which his conduct most grossly outrages.

Mr. Walpole has given us an extraordinarily powerful and tender study of this complex, but convincing, character, whose career is followed during the last forty-four years Of his life, down to the final dramatic scene that is both a tragedy and an idyll, at once a frustration and (if one allows the ideEi-Of immortality, which len& an even larger background to the story than the well-described Lake District of its imme- diate setting) a fulfilment. The personality of Francis is ;presented with special subtlety in relation to his simple, 'sturdy, straight-forward son, David ; his wistful, pathetic, fearful daughter, Deborah ; his, servant, Benjamin, who, though often brutally beaten by- his master, worships him with doglike fidelity to the end ; and his two wives—the first a patient slave who loves him without understanding, and the second a gipsy girl who understands him from the start, but comes only at long last to love him. But a host of minor figures—members of the Herries family and others-- throng the canvas, and the story is so contrived that we are given not merely scene after varied scene of eighteenth- century country life, but glimpses of historical events, including the 'Forty-Five Rebellion,. and rumours from the heart of London itself. The kaleidoscopic background, however, never obstructs the actual' tale. The whole book, which shows the Sir Walter Scott tradition revived, modernized and Anglicized, is remarkably spontaneous and vital. Mr. Walpole has never turned his varied gifts to ampler or better purpose.

Humphrey Daine, in The Burnt Man, is an idealist who uses a desperate remedy to free himself from his fetters. A painter and decorator in a West Country town, he is yoked to a wife whom he knows to be unfaithful. While she is out one night, he sets fire to his house and shop, and letting the world imagine that he has perished, goes off, with a few pounds in his pocket, to start a new life elsewhere. He is reduced to dire straits, until, being discovered upon the point of collapse, he is taken into the home of a kindly fanner and his two strongly contrasted daughters, his relationships with whom

supply the main theme of the book. If the opening chapters are somewhat far-fetched, the characterization as a whole is careful and sound, and the farm scenes are drawn with an intimate and authoritative touch that will charm all lovers

of English rural life. - - The hero of Mr. Basil Maine's first novel is,. like his creator, a musical critic. Told in the first -person, his tale is one of virtue attempting, but in a sudden crisis failing, to keep step with aspiration. Four very different women, including a Burmese dander and a German opera-singer, enter into the narrator's record of three years ; but it is an original feature of the story that the woman who in the long run exerts the greatest influence upon him makes no actual appearance. Mi. Maine writes with vivacity. The tempo of his Rondo is so rapid, indeed, that, while actually reading it, we are almost hustled into accepting it for a truly significant document. But when the book has been closed, we have to confess that its psychological subtlety was more apparent than real, and that we have been mesmerized by a brilliant exercise in verbal knpressionalism and music. If Rondo is an unsatisfactory novel, it is a clever and unusual tour de force.

The Woman of Andros is a study of Christianity blossoming .before its time. Mr. Thornton Wilder takes us back to the days of Greece in her decline, and, introducing us to the little community upon an island in the £gean, shows us, against the background of a decaying civilization that lacks hope or purpose, the part played by three characters who, f. o-n different angles, unconsciously look towards the rising of that unheard-of Star in the land that is " soon to be called Holy." Mr. Wilder has eschewed both sensationalism and senti- -mentalitys and has given us a delicately written idyll that is poignant in its restraint and quiet beauty.

It is unfortunate for Mr. Campbell that his ,book should fall for review with The Woman of Andros. Eminent critics have, we notice, compared him with Mr. Thornton Wilder, and have ranked The Miracle of Peille with The Bridge of Sago ...Luis Rey. It seems to me, however, that the difference between Mr. Wilder and Mr. Campbell is the difference between the true and the sham. The Miracle of Peale, which Aescribes the life and death. of the modern young woman " saint " of a French village, is an ingenious sham, and it is not without its own sincere glints of spiritual perception. But as a story, with its absurd blending of mediaeval super, stition with present-day realism, it positively insults credulity and the style is too artificial and too imitative to be other than