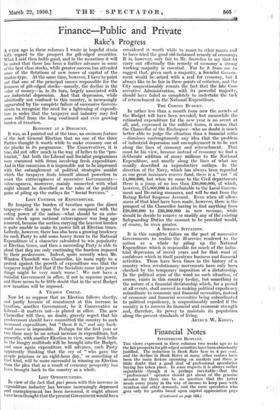 A WEEK ago in these columns I wrote in hopeful Strain with regard to the prospect for gilt-edged securities. What I said then holds good, and in the meantime it will be noted that there has been a further adyance in some of the best class stocks, while greater success has attended some of the flotations of new issues of capital of the trustee type. At the same time, however, I have to point out that one of the principal causes responsible for the firmness of gilt-edged stocks—namely, the decline in the value of money—is, in its turn, largely associated with our industrial depression. And that depression, while admittedly not confined to -this country, is increasingly aggravated by the complete failure of successive Govern- ments to recognize the need for a lightening of expendi- ture in order that the taxpayer and industry may feel some relief from the long continued and ever growing burden of taxation.

ECONOMY AT A DISCOUNT.

It was, as I pointed-out at the time, an ominous feature of the last General Election that no one of the three Parties thought it worth while to make economy one of the planks in its programme. The Conservatives, it is true, did not offer much in the way of bribes to the "pro- letariat," but both the Liberal and Socialist programmes were crammed with items involving fresh expenditure. And in this connexion it is impossible not to be impressed with the entanglement of political strategies amidst which the taxpayer finds himself almost powerless to resist the extravagances of successive Governments— extravagances, -moreover, mainly connected with what might almost be described as the rules of the political game of piling up the outlays for " Social Services."

By heaping the burden of taxation upon the direct taxpayer—that is upon the few as compared with the voting power of the nation—what should be an auto- matic check upon national extravagance was long ago removed, because the section carrying the heaviest burden is quite unable to make its power felt at Election times. Latterly, however, there has also been a growing tendency for each Party to add some heavy items to the National Expenditure of a character calculated to win popularity at Election times, and then a succeeding Party is able to plead that they are only continuing the burdens imposed by their predecessors. Indeed, quite recently when Mr. Winston Churchill was Chancellor, his main reply to a protest against the growth of expenditure was that the taxpayer might feel that if the Socialists came into power things might be very much worse ! We now have a Socialist Government in office, if not in supreme power, and there seems to be little doubt that in the next Budget new taxation -will be imposed.

Now let us suppose that an ..Election follows shortly, and partly- because of resentment at this increase in taxation, another Government, be it Conservative or Liberal—it matters not—is placed in office. The new Chancellor.- will then, no doubt, gravely regret that his predecessors should have committed the country to such increased expenditure, but " there it is," and any back- ward move is impossible. Perhaps for the first year or two there may be no actual increase in expenditure, but presently, with another Election in view, some fresh bribe to the hungry multitude will be brought into the Budget, and once again expenditure -will advance, each Party apparently thinking that the cry of " who ,gave the people pensions or an eight-hour day," or something of that kind, will be more successful in winning an Election than the plea that as a result of economy prosperity has been brought back to the country as a whole.

In view of the fact that pari passe with this increase- in expenditure industry has become increasingly depressed and unemployment has been increased, it might almost have been thought that the present Governificativinild have considered it worth while to resort to other means and to have tried the good old-fashioned remedy of economy4 It is, however, only fair to Mr. Snowden to say that td carry out effectually this remedy of economy a strong working majority is essential. Far be it from me to suggest that, given such a majority, a Socialist Govern- ment would be seized with a zeal for economy, but I always like to be fair in these points of criticism, and the City unquestionably resents the fact that the late Cow servative Administration, with its powerful majority, should have failed so completely to undertake the task of retrenchment in the National Expenditure.

In rather less than a month from now the secrets of the Budget will have been revealed, but meanwhile the estimated expenditure for the new year is no secret at all, and, expressed in the mildest terms, it means that the Chancellor of the Exchequer—who no doubt is much better able to judge the situation than a financial critic —dismisses contemptuously any idea that the problem of industrial depression and unemployment is to be met along the lines of economy and retrenchment. That must be his view, because instead of economy we find a deliberate addition of many millions to the National Expenditure, and mostly along the lines of what are usually described as unproductive outlays. In the direction of the Navy, which has always been regarded as our great insurance reserve fund, there is a " cut " of £4,000,000, but when we come to the Civil departments there is a jump of no less than £56,000,000, of which, however, £15,000,000 is attributable to the Local Govern- ment and De-rating measures, and will be met from the Rating Relief Suspense Account. Even when all allow- ances of that kind have been made, however, there is the prospect of the Chancellor having to find anything from £20,000,000 to £30,000,000 in new revenue, while should he decide to remove or modify any of the existing Safeguarding Duties the amount to be provided would, of course, be even greater.

It is this complete failure on the part of successive Governments to realize the ill-service rendered to the nation as a whole- - by piling up the National Expenditure which is responsible for much of the indus- trial depression of recent years and for that want of confidence which in itself paralyses business and financial activities. There have been times in the history of a country when revolutionary movements have only been checked by the temporary imposition of a dictatorship. In the political sense of the word no such Situation, of course, exists in this country to-day, but something in the nature of a financial dictatorship which, for a period at all events, shall succeed in making political expediency subordinate to economic and financial necessities, instead of economic and financial necessities being subordinated to political expediency, is unquestionably needed if the country is to recover its financial and economic strength and, therefore, its power to maintain its population along the present standards of living.