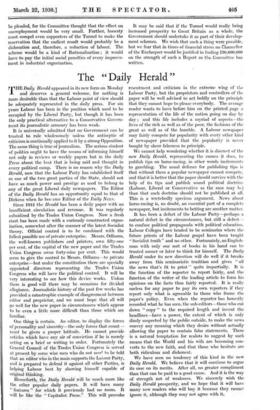 THE Daily Herald appeared in its new form on Monday and deserves a general welcome, for nothing is more desirable than that the Labour point of view should be adequately represented in the daily press. For six years Labour has been in the position which used to be occupied by the Liberal Party, but though it has been the only practical alternative to a Conservative Govern- Ment its journalistic armoury has been weak.

It is universally admitted that no Government can be trusted to rule wholesomely unless the antiseptic of criticism is continually applied to it by a strong Opposition. The same thing is true of journalism. The serious student of politics ought to have the means of informing himself not, only in reviews or weekly papers but in the daily Press about the best that is being said and thought in every political camp. There is no reason why the Daily Herald, now_ that the Labour Party has established itself as one of the two great parties of the State, should not have as- much power and prestige as used to belong to any of the great Liberal daily newspapers. The Editor of the Daily Herald has an opportunity equal to that of Dickens when_ he bee ame Editor of the Daily News.

Since 1912 the Herald has been a daily paper with an insufficient circulation. and revenue. It was regularly subsidized by the Trades Union Congress. Now a fresh start has been made with a curiously constructed organ- ization, somewhat after the manner of the latest Socialist theory. Official control is to be combined with the fullest possible use of private enterprise. Messrs. Odhams, the well-known publishers and printers, own fifty-one per cent. of the capital of the new paper and the Trades Union Congress owns forty-nine per cent. This would seem to give the control to Messrs. Odhams—to private enterprise—but under the constitution there are.specially appointed . directors representing the Trades Union Congress who will have the political control. It will be very interesting to see how this device works. Unless there is good will there may be occasions for divided allegiance. Journalistic history of the past few weeks has provided a catastrophic example of disagreement between editor and proprietor, and we must hope that all will go well for the new paper in circumstances which appear to be even a little more difficult than those which are familiar.

One thing is certain. An editor, to display the forces of personality and sincerity—the only forces that count— must be given a proper latitude. He cannot provide articles which have any air of conviction if he is merely acting on a brief or writing to order. Fortunately the General CounCil of the Trades Union Congress is served at present by some wise men who do not need to be.told that an editor Who in the main supports the Labour Party, and is prepared to defend it against all other Parties, is helping Labour hest by .showing himself capable of originalthinking.. . Henceforth, the _Daily Herald will be much more like the other popular daily papers. It will have many " features" for' which it previously had no room. It will be like 'the " Capitalist_ Press.".. This will provoke resentment and criticism in the extreme wing of the Labour Party, but the proprietors and controllers of the paper will be well advised to act boldly on the principle that they cannot hope to please everybody. The average reader wants to have before him on the printed page a representation of the life of the nation going on day by day ; and this life includes a myriad of aspects—the lives of the rich as well as of the poor, the fashions of the great as well as of the humble. A Labour newspaper may fairly compete for popularity with every other kind of newspaper provided . that the popularity is never bought by sheer falseness to principle.

We cannot help wondering whether it is discreet of the new Daily Herald, representing the causes it does, to publish tips on horse-racing, in other words incitements to gambling. The usual defence for publishing tips is that without them a popular newspaper cannot compete, and that it is better that the paper should survive with the help of its tips and publish sound political doctrine (Labour, Liberal or Conservative as the case may be) than that such doctrine should not be published at all. This is a wretchedly specious argument. News about horse-racing is, no doubt, an essential part of a complete newspaper, but incitements to betting are another matter.

It has been a defect of the Labour Party—perhaps a natural defect in the circumstances, but still a defect— to confuse political propaganda with political education. Labour Colleges have tended to be seminaries where the future priests of the Labour gospel have been taught " Socialist truth " and no other. Fortunately, an English- man with only one sort of books in his hand can be trusted sooner or later to think for himself. The Daily Herald under its new direction will do well if it breaks away from this seminaristic tradition and gives " all the news that's fit to print " quite impartially. It is the function of the reporter to report fairly, and the function of the writer of the leading article to form his opinions on the facts thus fairly reported. It is really useless for any paper to pay its own reporters if they report only what is agreeable to those who frame the paper's policy. Even when the reporter has honestly recorded what he has seen, the sub-editors—those who cut down " copy " to the required length and invent the headlines—have a power, the extent of which is only dimly suspected by the public outside, to make the news convey any meaning which they desire without actually allowing the paper to contain false statements. There is a natural temptation for zealots to suggest by such means that the World and his wife are becoming con- verts to the new faith, and that those who hesitate are both ridiculous and dishonest.

We have seen no tendency of this kind in the new Daily Herald. We believe that it will continue to argue its case on its merits. After all, no greater compliment than that can be paid to a good cause. And it is the way of strength not of weakness. We sincerely wish the Daily Herald prosperity, and we hope that it will have many new readers who will buy it because they cannot ignore it, although they may not agree with it.