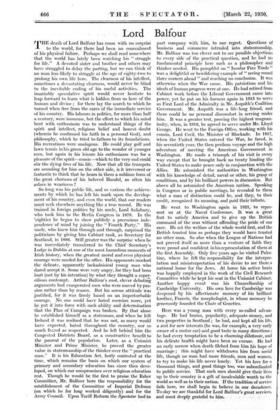 THE death of Lord Balfour has come with no surprise to the world, for there had been no concealment of his physical failure. Perhaps we shall read somewhere that the world has lately been watching his " struggle for life." A devoted sister and brother and others may have struggled to delay the parting, but we can think of no man less likely to struggle at the age of eighty-two to prolong his own life here. The clearness of his intellect, sometimes a devastating clearness, would never be blind to the inevitable ending of his useful activities. The insatiably speculative spirit would never hesitate to leap forward to learn what is hidden from us here of the human and divine ; for there lay the search to which he turned when free from the cares of the immediate service of his country. His labours in politics, for more than half a century; were immense, but the effort to which his mind bent with enthusiasm was to understand things of the spirit and intellect, religious belief and honest doubt (wherein he confirmed his faith in a personal God), and philosophy; which he tried to fathom to its foundations. His recreations were analagouS. He could play golf and lawn tennis in his green old age to the wonder of younger men, but again in his leisure his enthusiasm was for a pleasure of the spirit—music—which to the very end could stir the dying fires of his life. Now that all the trumpets are sounding for him on the other side, is it irreverent or fantastic to think that he hears in them a sublime form of the great choruses of his beloved Handel, so often his solace. in weariness.?

So Jong, was his pnblic life,, and so various the achieve- ments by .which he has left his mark upon the develop- ment of his country, and even the world, that our readers must seek elsewhere anything like a true record.. Re was trained in foreign politics by his uncle,: Lind Salisbury, who took him to the Berlin 'Congress in 1878. In the 'eighties he began to show publicly a precocious inde- pendence 'of mind by joining the " Fourth Party" His Uncle, who knew him through and through, surprised the politicians :by giving him Cabinet rank, as Secretary for Scotland, in 1886. -Still'greater was surprise When he was immediately transferred to the Chief Secretary's Lodge in Dublin at one of the most hazardous moments of Irish history, when the greatest moral and even physical courage were needed for the office. His opponents mocked the delicate, apparently lackadaisical young man who dared accept it. Some were very angry, for they had been hurt (not by his intention) by what they thought a super- cilious contempt.:. Arthur. Balfour's cool, clever debating arguments had exasperated men who were moved by pas- sion rather than by reason. But his serene attitude was justified, for it was firmly based on an imperturbable courage. No one could have hated coercion more, yet he put it into force with such ability and determination that the Plan of Campaign was broken. By that alone he established himself as a statesman, and when he left Ireland it was realized that he was not, as many would have expected, hated throughout the country, nor so much feared as respected. And he left behind him the Congested Districts Board, as a constructive benefit to the poorest of the population. Later, as a Unionist Minister and Prime Minister, he proved the greater :value in statesmanship of the thinker over the " practical man." It is his Education Act, hotly contested at the -time, Which remains the basis on which our system of primary and secondary education has since then deve- loped, on which our compromises over religious education rest. Though he would be, the first to praise the Esher Committee, Mr. Balfour bore the responsibility for the establishment of the Committee of Imperial Defence (on which he for long worked diligently) and for the Army Council: Upon Tariff Reform- the Spectator had to part company with him, to our regret. Questions of business and commerce intruded into statesmanship. Mr. Balfour was too clever -not to see possible objections to every side of the practiCal question; and he had no fundamental principle here such as a philosopher and thinker needed. His pamphlet on " Insular Free TM& " was a delightful or 'bewildering example of " seeing round three corners ahead "'and reaching no conclusion. It was otherwise when -the -War came. His patriotism and his ideals of human progress were at one • He had retired from Cabinet work before the Liberal Government came into power, yet he put on his harness again in 1915 to serve as First Lord of the Admiralty in Mr. Asquith's Coalition Government. Mr. Asquith was a life- long friend, - and there could be no personal discomfort in serving under him. It was a greater test, proving the highest magnan- imity, when, in 1916, he agreed to serve .under Mr. Lloyd George. He went to the Foreign Office, working with his cousin, Lord Cecil, the Minister of Blockade. In 1917, When the United States entered the War, he faced, in his seventieth year, the then perilous voyage and the high adventure of meeting the American Government in Washington. He made a triumph of his .visit in every way except that he brought back no treaty binding the United States to make peace only in conjunction with the Allies. He astonished the authorities in Washington with his knowledge of detail, naval or other, his grasp. of conditions, and by his brilliant powers in diseussiOn. But above all he astonished the American nation. .Speaking in . Congress or in public meetings, he revealed to them What a man of distinction could be," and they, to their credit, recognized its meaning, and paid_ their tribute... '

He went to Washington again in 1921;-' to repre- sent us at the Naval Conference. It was a great feat to satisfy America and to give up the "British -command of the seas without offending the pride of our race. He set the welfare of the whole world first, and the British trusted him as perhaps they would have trusted no other man. So also when the League of Nations had not proved itself as more than a venture of faith they were proud and confident in his representation of them at the first Assembly. Only five years ago he visited Pales- tine, where he felt the responsibility for the interpre- tation and misinterpretation of his desire to see there a national -home -for the Jews. At home his active brain was happily employed. in the work of the Civil Research Committee while he kept his seat in the Unionist Cabinet. Another happy event was his Chancellorship .of Cambridge UniVersity. His own love for Cambridge was deepened by his affectionate memory of his brilliant brother, Francis, the morphologist, in whose memory he generously founded the Chair of 'Genetics.

Here was a young man with every so-called advan- tage. He had brains, popularity, adequate money, and two properties in Scotland ; he had, and -kept all his life, a zest for new interests (he was, for example; a very early owner of a motor car) and good taste, in many directions ; he had every .temptation to be a charming dilettante, and his delicate health might have been an excuse. He had an early sorrow when death filched from him his hope of marriage ; this might have withdrawn him from social life, though no man had more friends, men and women, to try to make his life never lonely. Yet his love for a thousand things, and good things too, was subordinated to public service. That such men -should give their lives up to their country is a gift of incalculable worth to the world as well as to their nation. If the tradition of service fails here, we shall begin to believe in our decadence. To-day we are thankful for Lord Balfour's great services, and most . deeply grateful to him. -