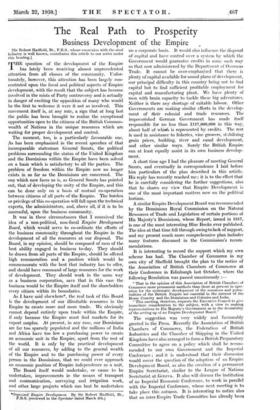 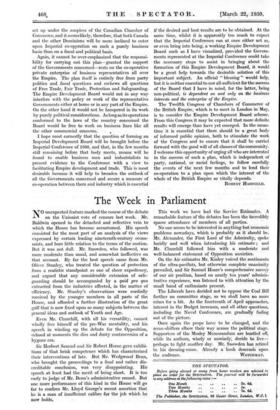 Page 7, 22 March 1930 — The Real Path to Prosperity Business Development of the Empire
Close

The Real Path to Prosperity Business Development of the Empire

[Sir Robert Hadfield, Bt., P.R.S., whose connexion with the steel industry is well known, contributes this article to our series under this heading.].

THEquestion of the development of the Empire has lately been receiving almost unprecedented attention from all classes of the community. Unfor- tunately, however, this attention has been largely con- centrated upon the fiscal and political aspects of Empire development,. with the result,that the subject has become involved in the mists of Party controversy and is actually in danger of exciting the opposition of many who would be the first to welcome it were it not so involved. This movement itself is, at any rate, a sign that at long last the public has been brought to realize the exceptional opportunities open to the citizens of the British Common- wealth of Nations in the unique resources which are waiting for proper development and control.

The moment, too, is a particularly favourable one, As has been emphasized in the recent speeches of that incomparable statesman General Smuts, the political problems surrounding the status of the United Kingdom and the Dominions within the Empire have been solved on a basis which is satisfactory to all the parties. The problem of freedom within the Empire now no longer exists in so far as the Dominions are concerned. The one which now faces us is, as General Smuts has pointed out, that of developing the unity of the Empire, and this can be done only on a basis of mutual co-operation between citizens of all parts of the Empire. " The bniden or privilege of this co-operation will fall upon the technical experts, the administrators, and, above all, if it is to be successful, upon the business community.

It was in these circumstances that I conceived the idea of a 'non-political, non-fiscal Empire Development Board, which would serve to co-ordinate the efforts of the business community throughout the Empire in the development of all the resources at our disposal. The Board, in my opinion, should be composed of men of the best ability engaged in business to-day. They should be drawn from all parts of the Empire, should, be offered high remuneration and a position which would be commensurate with the best that industry has to offer, and should have command of large resources for the work of development. They should work in the same way as a business corporation, save that in this case the business would be the Empire itself and the shareholders every citizen within its boundaries.

As I have said elsewhere*, the real task of this Board is the development of our illimitable resources in the Empire to create more and more trade. We obviously cannot depend entirely upon trade within the Empire, if. only because the Empire must find markets for its export surplus. At present, in any case, our Dominions are far too sparsely populated and the millions of India and Africa have too low a purchasing power to create an economic unit in the Empire, apart from the rest of the world. It is only by the practical development of all our re.sources, by adding to the general wealth of the Empire and to the purchasing power of every person in the Dominions, that we could ever approach an economic position of Empire independence as a unit.

The Board itself would undertake, or cause to be undertaken, improvements in the means of transport and conlinuhication, • surveying and irrigation work, and other large projects which can best be undertaken *Organised Empire Development. By Sir Robert- Hadfield, Bt., F.R.S. (reviewed in the Spectator dated March 8th.) on a corporate basis. It would also influence the disposal of capital and have control over a system by which the Government would guarantee credits in some such way as that now administered by the Department of Overseas Trade. It cannot be over-emphasized that there is plenty of capital available for sound plans of development, our principal difficulty in this country being not to find capital but to find sufficient profitable employment for 'capital and manufacturing plant. We have plenty of men with brain capacity to tackle these big adventures. Neither is there any shortage of suitable labour. Other Governments are making similar efforts in the develop- ment of their colonial and trade resources. The impoverished German Government has made itself responsible for no less than £117,000,000 in this way, about half of which is represented by credits. The rest is used in assistance to fisheries, vine growers, stabilizing grain prices, building, river and canal development, and other similar ways. Surely the British Empire can at least equally assist in its own business develop- ment.

A short time ago I had the pleasure of meeting General Smuts, and eventually in correspondence I laid before him particulars of the plan described in this article. His reply has recently reached me ; it is to the effect that he is carefully considering the further • suggestions, also that he shares my view that Empire Development is one of the most important matters now on the political horizon.

A similar Empire Development Board was recommended by the DOminions Royal Commission on the Natural Resources of Trade and Legislation of certain portions of His Majesty's Dominions, whose Report, issued in 1917, is one of the most interesting Blue Books ever published. The idea at that time fell through owing to lack of support, and my present much more comprehensive plan includes many features discussed in the Commission's recom- mendations.

It is interesting to record the support which my own scheme has had. The Chamber of Commerce in my own city of Sheffield brought the plan to the notice of the Association of British Chambers of Commerce at their Conference in Edinburgh last October, where the following Resolution was passed unanimously " That in the opinion of this Association of British Chamber3 of Commerce more permanent methods than those at present in oper- ation for the systematic development of the resources and poten- tialities of the British Empire are essential in the interest of the Home Country and the Dominions and Colonies and India.

" This meeting, therefore, requests the Executive Council to give immediate consideration to the subject, with a view to making representations to His Majesty's Government as to the desirability of the setting up of an Empire Development Board."

The suggestion was very widely and favourably greeted in the Press. Recently the Association of British Chambers of Co'mmerce, the Federation of British Industries and the Chamber of Shipping in the United Kingdom have also arranged to form a British Preparatory Committee to agree on a policy which shall be -recom- mended to our own Government and the Imperial Conference ; and it is understood that their discussion would cover. the question of the adoption of an Empire Development Board, as alSo the creation of a permanent Empire Seeretariat, similar to the League of Nations Secretariat at. Geneva. It also will discuss the institution Of an Imperial Economic Conference, to work in parallel with the Imperial Conference, whose next meeting is to take place this .auturnn. It is interesting to notice also that an inter-Empire Trade Committee has already been set up under the auspices of the Canadian Chamber of Commerce, and it seems likely, therefore, that both Canada and the other Dominions will. be more inclined to enter upon Imperial co-operation on such a purely business basis than on a fiscal and political basis.

. Again, it cannot be over-emphasized that the responsi- bility for carrying out this plan—granted the support of the Governments concerned—rests on the co-operative private enterprise of business representatives all over the Empire. The plan itself is entirely free from party politics and fiscal questions and eschews all questions of Free Trade, Fair Trade, Protection and Safeguarding. The Empire Development Board would not in any way interfere with the policy or work of the representative Governments either at home or in any part of the Empire. On the other hand it would not be hampered in its work by purely political considerations. As long as its operations conformed to the laws of the country concerned the Board would be free to work on business lines like all the other commercial concerns. • I hope most earnestly that the question of forming an Imperial Development Board will be brought before the Imperial Conference of 1930, and that, in the few months still remaining before that body meets, means will be found to enable business men and industrialists to present evidence to the Conference with a view to facilitating Empire development and trade. This is most desirable because it will help to broaden the outlook of all the. Governments concerned and secure a measure of co-operation between them and industry which is essential if the desired and best results are to be obtained. At the same time, whilst it is apparently too much to expect that the Imperial Conference can at once either act as, or even bring into being, a working Empire Development Board such as I have visualized, provided 'the Govern- ments represented at the Imperial Conference could take the necessary steps to assist in bringing about the formation of this Empire Development Board, it would be a great help towards the desirable solution of this important subject. An official " blessing " would help, but it is neither essential to nor all-sufficient for the success of the Board that I have in mind, for the latter, being non-political, is dependent on and only on the business interests and the enterprise of the- Empire.

The Twelfth Congress of Chambers of Commerce of the British Empire, which is to meet in London in May, is to consider the Empire Development Board scheme. From this Congress it may be expected that more definite results will emerge than have yet emerged. In the mean- time it is essential that there should be a • great body of informed- public opinion, both to stimulate the work of the Congress and to ensure that it shall be carried forward with the good will of all classes of the community. I welcome this opportunity of urging all who are interested in the success of such a plan, which is independent of party, national, or racial feelings, . to follow carefully the events of the next few months and to lend their co-operation to 'a plan upon which the interest of the whole of the British Empire so vitally depends. -