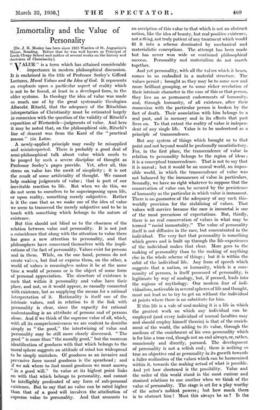 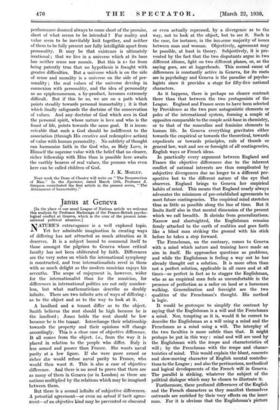 Page 9, 22 March 1930 — Immortality and the Value of Personality
Close

Immortality and the Value of Personality

[Dr. J. K. Mosley has been since 1925 Warden of St. Augustine's House, iteading. Before that he 'was well known as Principal of Leeds Clergy School and author of Several works on the history and doctrines, of Christianity].

VALUE " is a term which has attained considerable . importance in modern philosophical discussion. It is enshrined in the title of. Professor Sorley's Gifford Lectures, Moral Values and the Idea of God. It represents an emphasis upon a particular aspect of reality which is not to be found, at least in a developed form, in the older systems. In theology the idea of value was made so much. use of by the great systematic theologian Albrecht Ritschl, that the adequacy of the Ritschlian interpretation of Christianity must be estimated largely in connexion with the question of the validity of Ritschl's exposition of Werturteile—judgments of value. And here it may be noted that, on the philosophical side, Ritschl's line ofj descent was from the Kant of the " practical reason " via. Lotze.

A. newly-applied principle may easily be misapplied and misinterpreted. There is probably a good deal of semi-philosophical talk about value which needs to be purged by such a severe discipline of thought as Professor Sorley's pages provide. Yet, after all, this stress on _value has the merit of simplicity ; • it is not the result of some artificiality of thought. We cannot help making judgments of value ; that is part of our inevitable reaction to life. But when we do this, we do not seem to ourselves to be superimposing upon life, or upon reality, something merely subjective. Rather is it the case that as we make use of the idea of value we seem to. transcend the merely subjective and to be in touch with something which belongs to the nature of existence.

But this should not blind us to the closeness of the relation between value and personality. It is not just a coincidence that along with the attention to value there has gone a new attention to personality, and that philosophers have concerned themselves with the impli- cations of t he fact of personality. Values exist for persons and in them. While, on the one hand, persons do not create values, but find or express them, on the other, a world, of values is meaningless unless it be at the same time. a. world of persons or is the object of some form of personal appreciation. The structure of existence is such that within it personality and value have their place, and not, so it would appear, as casually connected existence, but as supplying the means for a rational interpretation of it. Rationality is itself one of the intrinsic values, and in relation to it the link with Personality is clear, since the capacity for rational understanding is an attribute of persons and of persons alone. And if we think of the supreme value of all, which, with all its comprehensiveness we are content to describe siinply. as " the good," the intertwining of value and personality may be still more clearly discerned. " The good" is more than "the morally good," but the common identification of goodness with that which belongs to the Moral sphere suggests an attitude of mind too widespread to be simply mistaken. Of goodness as an invasive and pervasive force moral goodness is the spearhead ; and if we ask where to find moral goodness we must answer a good will." So value at its highest point links on with that which belongs to personality, and cannot be intelligibly predicated of any form of sub-personal existence. But to say that no value can be rated higher than that of a good will involves the attribution of supreme value to personality. And that amounts to an ascription of this value to that which is not an abstract notion, like the idea of beauty, but real positive existence, not a thing, not truly patient of any treatment which would fit it into a scheme dominated by mechanical and materialistic conceptions. The attempt has been made but has never won wide or continued philosophical success. Personality and materialism do not march together.

And yet personality, with all the values which it bears, comes to us embodied in a material structure. The values persist ; brought as they may be to some new and more brilliant grouping, or to some richer revelation of their intrinsic character in the case of this or that person, they live on as permanent endowments of humanity, and, - through humanity, of all existence, after their Connexion with the particular person is broken by the fact of death. Their association with him belongs to a real past, and in memory and in its effects that past lives on. To that extent the reality of value is indepen- dent of any single life. Value is to' be understood as a principle of transcendence.

But any system of things which brought us to that point and not beyond would be profoundly unsatisfactory. For, in the first place, the transcendence of value in relation to personality belongs to the region of ideas ; it is a conceptual transcendence. That is not to say that it is unreal ; but it would be an unreal 'world, an impos- sible world, in which the transcendence of value was not balanced by the immanence of value in particulars. Secondly, we have no right whatever to suppose that the conservation of value can, be secured by the persistence of humanity as the particular in which value is immanent. There is no guarantee of the adequacy of any such this- worldly provision for the stabilizing of values. That values will survive because the race is immortal is one Of the most precarious of expectations. But, thirdly, there is no real conservation of values in what may be termed " racial immortality." The value of personality itself is not diffusive in the race, but concentrated in the individual. The very fact that personality is something which grows and is built up through the life-experiences of the individual makes that clear. More goes to the making of personality than to the making of anything else in the whole scheme of things ; but it is within the orbit of the individual life. Any form of speech which suggests that a nation, or humanity, which is a com- munity of persons, is itself possessed of personality, is legitimate by way of analogy, but, if pressed, leads into the regions of mythology. Our modern fear of indi- vidualism, noticeable in several spheres of life and thought, must not lead us to try to get on without the individual at points where there is no substitute for him.

If this life is a vale of soul-making it is a life in Which the greatest work on which any individual can be employed (and every individual of normal faculties may and should employ himself therein) is that of the enrich- ment of the world, the adding to its value, through the medium of the enrichment of his own personality which is for him a true end, though not an end always, or, rather, consciously and directly, pursued. The development of personality is not a selfish end ; there is nothing so true an objective end as personality in its growth towards a fuller realization of the values which can be harmonized within it, towards the making actual of what is possible. And yet how shortened is the possibility. Value and the order of this world stand in the most curious and strained relations to one another when we think of the value of personality. The stage is set for a play worthy of the actor's noblest powers ; but how much there is to obstruct him ! Must this al. ways be so ? Is the performance doomed always to come short of the promise, short of what seems to be intended ? For reality and value seem to be inevitably knit together, and neither of them to be fully present nor fully intelligible apart from personality. It may be that existence is ultimately irrational ; that we live in a universe which at its base has neither sense nor morals. But this is s) far from being patently true that no hypothesis is fraught with greater difficulties. But a universe which is on the side of sense and morality is a universe on the side of per- sonality ; the real -values of the universe develop in connexion with personality, and the idea of personality as an epiphenomenon, a by-product, becomes extremely difficult. But if this be so, we are on a path which points steadily towards personal immortality ; it is that which finally safeguards the doctrine of the conservation of values. And any doctrine of God which sees in God the personal spirit, whose nature is love and who is the fount of life, points towards the same goal. It is incon- ceivable that such a God should be indifferent to the association (through His creative and redemptive action) of value with human personality. No subtlety of thought can harmonize faith in the God who, as Holy Love, is Himself the supreme value with the belief that no clearer, richer fellowship with Him than is possible here awaits the earthly bearers of real values, the persons who even here can be called children of God. J. K. MOZLEY.

Next week the Dean of Chester will write on " The Resurrection of Men." In the Spectator, dated March 15th, Professor J. Simpson contributed the first article in the present series, " The Attainment of Immortality."