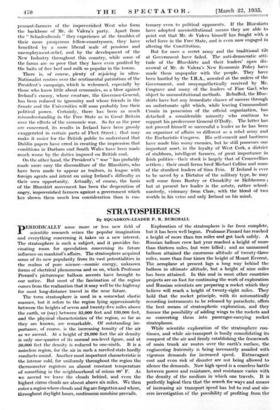 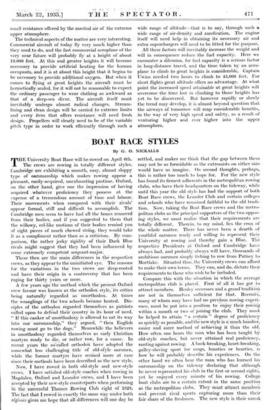 PERIODICALLY some more or less new field of scientific research seizes the popular imagination and everything concerning it takes on a new interest. The stratosphere, is such a subject, and it provides fas- cinating room for speculation concerning its future influence on mankind's affairs. The stratosphere acquired some of its new popularity from its vast potentialities in the realms of pure science—cosmic energy, unknown forms of electrical phenomena and so on, which Professor Piecard's picturesque balloon ascents have brought to our notice. But most of the fascination of the region comes from the realization that it may well be the highway for most long-distance travel in the near future.

The term stratosphere is used in a somewhat elastic manner, but it refers to the region lying approximately between the heights of seven and twenty-five miles above the earth, or (say) between 85,000 feet and 130,000 feet, and the physical characteristics of the region, so far as they are known, are remarkable. Of outstanding im- portance, of course, is the increasing tenuity of the air as we ascend. At a height of 28,000 feet the air density is only one-quarter of its normal sea-level figure, and at 50,000 feet the density is reduced to one-ninth. It is a noiseless region, for the air in such a rarefied state hardly conducts sound. Another most important characteristic is the intense cold, for uniformly throughout the region the thermometer registers an almost constant temperature of something in the neighbourhood of minus 60° F. As we ascend we leave the clouds behind, and even the highest cirrus clouds are absent above six miles. We then enter a region where clouds and fog are forgotten and where, throughout daylight hours, continuous sunshine prevails. Exploration of the -stratosphere is far from complete, but it has been well begun. Professor Piccard has reached a height of more than ten miles and got back safely. A Russian balloon crew last year reached a height of more than thirteen miles, but were killed ; and an unmanned balloon attained the enormous altitude of twenty-three miles, more than four times the height of Mount Everest. The aeroplane at present lags a long way behind the balloon in ultimate altitude, but a height of nine miles has been attained. In this and in most other countries projects are on foot for continuing the work of exploration and Russian scientists are preparing a rocket which they believe will reach a height of twenty-eight miles. They hold that the rocket principle, with its automatically recording instruments to be released by parachute, offers the best means of stratospheric exploration, and they foresee the possibility of adding wings to the rockets and so converting them into passenger-carrying rocket stratoplanes.

While scientific exploration of the stratosphere con- tinues, and while air-transport is busily consolidating its conquest of the air and firmly establishing the framework of main trunk air routes over the earth's surface, the engineering fraternity is being incessantly assailed with vigorous demands for increased speed. Extravagant cost and even risk of disaster are not being allowed to silence the demands. Now high speed is a ceaseless battle between power and resistance, and resistance varies with the density of the medium in which one travels. It is perfectly logical then that the search for ways and means of increasing air transport speed has led to real and sin- cere investigation of the possibility of profiting from the small resistance offered by the rarefied air of the extreme upper atmosphere. The technical aspects of the matter are very interesting. Commercial aircraft of today fly very much higher than they used to do, and the fast commercial aeroplane of-the very near future will probably fly at a height of about 13,000 feet. At this and greater heights. it will become necessary to provide artificial heating for the human occupants, and it is at about this height that it begins to be necessary to provide additional oxygen. But when it comes to flying at great heights the aircraft must be hermetically sealed, for it will not be reasonable to expect the ordinary passenger to wear clothing as awkward as that of a deep-sea diver.. The aircraft itself must inevitably. undergo almost radical changes. Stream- lining and clean design will be carried to extreme limits and every item, that offers resistance will need fresh design. Propellers will clearly need to be of the variable pitch type in order to work efficiently through such a wide range of altitude—that is to say, through such * wide range of air-density and rarefication. The engine itself will need help in obtaining its necessary air and extra superchargers will need to be fitted for the purpose.

All these factors will inevitably increase the weight and will in consequence reduce the fuel capacity. Here we encounter a dilemma,. for fuel capacity is a serious factor in long-distance travel, and the time taken oy an aero- plane to climb to great heights is . considerable. Captain Uwins needed two hours to climb to 45,000 feet. For short flights great altitude offers no advantage. At what point the increased speed attainable at great heights will overcome the time lost in climbing to those heights has yet to be discovered. But however. rapidly or slowly the trend may develop, it is almost beyond question that the airways of tomorrow will reap considerable benefits, in the way of very high speed and safety, as a result of venturing higher and ever higher into the upper atmosphere.