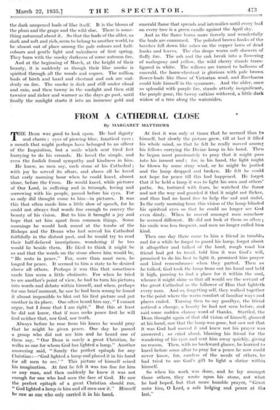 FROM A CATHEDRAL CLOSE

THE Dean was good to look upon. He had dignity and charm ; eyes of piercing blue, fanatical eyes ; a mouth that might perhaps have belonged to an officer of the Inquisition, but a smile which sent tired feet hurrying to do his errands. He loved the simple, and even the foolish found sympathy and kindness in him.

He knew, as men say, each stone of his Cathedral ; with joy he served its altars, and above all he loved that early morning hour when he could kneel, almost alone, before the Cross. He would kneel, while pictures of Our Lord, in suffering and in triumph, loving and sorrowing with his people, passed before his eyes. For so only did thought come to him—in pictures. It was this that often made him a little slow of speech, for he could not always find words fine enough to convey the beauty of his vision. But to him it brought a joy and hope that set him apart from common things. Some mornings he would look round at the tombs of the Bishops and the Deans who had served his Cathedral faithfully in the distant past, and he would try to read their half-defaced inscriptions, wondering if he too would lie beside them. He liked to think it might be so and that the words on the stone above him would be, " He rests in peace." For, more than most men, he longed for peace. It seemed to him a state to be desired above all others. Perhaps it was this that sometimes made him seem a little obstinate. For when he tried to see another's point of view, he had to turn hispictures into words and debate within himself, and when, perhaps for one brief moment, he saw he had been wrong he found it almost impossible to blot out his first picture and put another in its place. One often heard him say, " I cannot argue, but I know that I am right." But this at least he did not know, that if man seeks peace first he will find neither that, nor God, nor truth.

Always before he rose from his knees he would pray that he might be given peace. One day lie passed a group who did not see him and he heard one of them say, " Our Dean is surely a great Christian, he walks as one for whom God has lighted a lamp." Another answering said, " Surely the perfect epitaph for any Christian:—' God lighted a lamp and placed it in his hand for all men to see.' " This picture of himself seized his imagination. At first he felt it was too fine for him or any man, and then suddenly he knew it was not enough for one who had seen the face of God. He saw the perfect epitaph of a great Christian should run, " God lighted a lamp in him and all men saw it." Himself he saw as one who only carried it in his hand. - At first it was only at times that he seemed thus to himself, but slowly the picture grew, till at last it filled his whole mind, so that he felt he really moved among his fellows carrying the Divine lamp in his hand. Then he began most passionately to pray that it might pass into his inmost soul ; for, in his hand, the light might be blown by some stray wind, or he might be jostled and the lamp dropped and broken. He felt lie could not hope for peace till this had happened. He forgot that if he held a lamp it was to light his own and others' paths. So, tortured with fears, he watched the flame and not the way and guarded it that it might not flicker, and thus had no hand free to help the sad and sinful. In the early morning hour, this vision of the lamp blinded his spiritual eyes so that lie could no longer see God even dimly. When he moved amongst men somehow he seemed different. He did not look at them so often ; his smile was less frequent, and men no longer called him kind.

Then one day there came to him a friend in trouble. and for a while he forgot to guard his lamp, forgot about it altogether and talked of the hard, rough road his friend had got to tread, told him it was God's will, Promised to do his best to light it, promised him prayer and kind remembrance when they parted. Then as lie talked, God took the lamp from out his hand and held it high, pausing to find a place for it within the soul, whence it might shine so that all would see the servant of the great Cathedral as the follower of Him that lighteth every man. And so, forgetting self, they walked together to the point where the warm comfort of familiar ways and places ended. Turning then to say goodbye, the friend noticed a change, a beauty he had not seen before, and said some sudden clumsy word of thanks. Startled, the Dean thought again of that old vision of himself, glanced at his hand, saw that the lamp was gone, but saw not that it was God had moved it and knew not his prayer was answered ; so cried aloud, blaming his friend for the wandering of his eyes and sent him away quickly, giving no reason. Then, with no backward glance, he hurried to kneel before some altar to pray for a peace he now could never know, for, careless of the needs of others, he had tried to use God's gift to light a shrine within himself.

So when his work was done, and he lay amongst those others, they wrote upon his stone, not what he had hoped, but that more humble prayer, "Grant unto him, 0 Lord, a safe lodging and peace at the last."