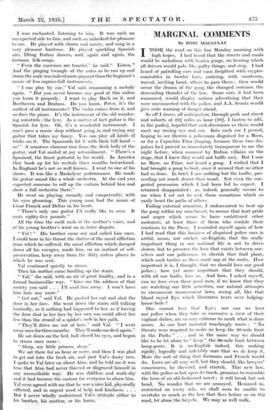 ITOOK the road on this fine Monday morning with high hopes. I had heard that the streets and roads would be melodious with beaten gongs, on hearing which all drivers would pale, like guilty things, and stop. I had heard of patrolling cars and vans freighted with crypto- constables in bowler hats, enticing; with courteous, waved, inviting hand, others to pass them ; then would occur the drama of the gong, the changed costume, the descending thunder of the law. Some cars, it had been rumoured, would display notices advertising that they were unconnected with the police, and A.A. Scouts would give code warning of danger ahead.

So off I drove, all anticipation, through park and street and suburb, at 29i miles an hour (19f, I hasten to add, in the parks), hopeful that such diversions as these would meet my roving eye and ear. Into each car I peered, hoping to see therein a policeman disguised for a Moor, or for a Capuchin Friar (hoping, because these two dis- guises had proved so immediately transparent to me the night before, when assumed by Italian villains on the stage, that I knew they would not baffle me). But I saw no Moor, no Friar, nor heard a gong. I wished that I had brought a gong to beat, since it seemed that no other had so done. In brief, I saw nothing but the traffic, pro- ceeding not much slower than usual. Not even the con- gested procession which I had been led to expect. I returned disappointed ; as, indeed, generally occurs to me when I set out to seek those sensations which so easily beset the paths of others.

Failing external sensation, I endeavoured to beat up the gong within my own breast, to arouse that hurt pride and anger which seems to have embittered other motorists, at least those of them who confide their emotions to the Press. I reminded myself again of how I had read that this business of disguised police cars is artful, mean, not cricket, un-English; that the really important thing in our national life is not to drive slower, but to preserve the love that exists between our- selves and our policemen, to cherish that frail plant, which such tactics as these must sap at the roots. How important it is, I thought, that we should love our good police ; how yet more important that they should, with all our faults, love us. And how, I asked myself, can we love even these good men, if we know that they are watching our little activities, our natural attempts to circumvent inconvenient laws, seeing all, like that bland rayed Eye which illustrates texts over lodging- house beds ?

One cannot love that Eye ; nor can we love our police when they take so excessive a view of their vigilant duties, are so very extreme to mark what is done amiss. As one hurt motorist touchingly wrote : " No threats were required to make us keep the 20-mile limit in the Parks " . . . and in the same way we should like to be let alone to " keep " the 30-mile limit between lamp-posts. It is un-English indeed, this making rigidly, logically and inflexibly sure that we do keep it.

More the sort of thing that Germans and French would do. Laws are all very well, but they should, like lawyers' consciences, be cheverel, and stretch. This new law, with the police so hot upon its track, promises to resemble the hero of an old-fashioned novel ; it will break but not bend. No wonder that we are annoyed. Hemmed in, restricted on every side, we shall soon be unable to overtake so much as the hen that flees before us on the road, let alone the bicycle. We may as well walk,