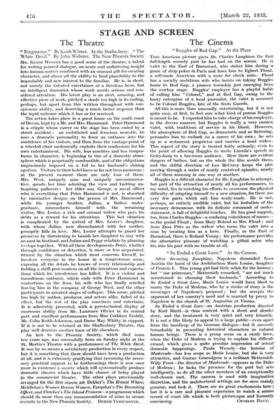 Ringmaster." By Keith Winter. At the Shaftesbury. C‘ The White Devil." By John Webster. The New Phoenix Society MR. KErrit WINTER has a good sense of the theatre, a talent for writing pointed dialogue, an acute and unflattering insight into human motive combined with an unusual gift for creating character, and above all the ability to lend plausibility to the improbable and new interest to the familiar. He is, in short, not merely the talented entertainer of a frivolous hour, but an intelligent dramatist whose work merits serious and con- sidered attention. His latest play is an alert, amusing, and effective piece of work, pitched a shade too high in its ending, perhaps, but apart from this written throughout with con- spicuous ability, and deserving a much better response than the tepid welcome which it has so far received.

The action takes place in a guest house on the south coast of Devon, kept by a Mr. and Mrs. Hammond. Peter Hammond is a cripple whose career on the stage has been ended by a street accident : an embittered and ferocious neurotic, he uses a dramatic personality to force an entrance into the confidence of his visitors, and then from the vantage-point of a wheeled chair sardonically exploits their confessions for his own entertainment. His wife, less assertive and less tempes- tuous in character, is beginning to tire of a domestic atmo- sphere which is perpetually combustible, and of the obligations .ungraciously imposed on a foil to her husband's shining egotism. Visitors to their hotel have so far not been numerous : at the present moment there are only four of them. Mrs. West, uniquely sane and uniquely uncommunica- tive, spends her time admiring the view and knitting un- inspiring pullovers : her elder son, George, a naval officer who is everything that Peter Hammond is not, is absorbed by ruminative designs on the person of Mrs. Hammond ; while his younger brother, Julian, a listless under- graduate, misconducts himself with the remaining visitor, Mrs. Lester, a rich and sensual widow who pays his debts as a reward for his attentions. This last situation is complicated by the arrival of Mrs. Lester's daughter, with whom Julian, now disenchanted with her mother, promptly falls in love. Mrs. Lester attempts to guard her preserves by threatening to banish her daughter to stay with an aunt in Scotland, and Julian and Peggy retaliate by planning to elope together. With all these developments Peter, whether through confidence or detection, is more or less acquainted. Stirred by the situation which most concerns himself, he involves everyone in the house in a tempestuous scene, exposing all the details he knows of every relationship and holding a shrill post-mortem on all the intentions and expecta- tions which his interference has killed. It is a violent and tumultuous outburst, which ends with Peter Hammond in contortions on the floor, his wife who has finally rebelled leaving him in the company of George West, and the other participants in assorted stages of collapse. This scene, pitched too high by author, producer, and actors alflie, failed of its effect, but the rest of the play convinces and entertains. It is admirably presented, with a pyrotechnical display of enormous ability from Mr. Laurence Olivier in its central part and excellent performances from Miss Cathleen Nesbitt, Mr. Colin Keith-Johnston, and Dame May Whitty in support. 'If it is not to be retained at the Shaftesbury Theatre, this play well deserves another lease of life elsewhere.

An heir to the Phoenix Society, which died some ten years ago, was successfully born on Sunday night at the St. Martin's Theatre with a performance of The White Devil. It was by no means a satisfactory production in every respect, but it is something that there should have been a production at all, and it is extremely gratifying that (assuming the neces- sary practical support to be forthcoming) there is now once more in existence a society which will systematically produce dramatic classics which have little chance of being played in the commercial theatre. The other plays provisionally arranged for the first season are Dekker's The Honest Whore, Middleton's Women Beware Women, Farquhar's The Recruiting Officer, and Fletcher's The Island Princess—a programme which should do more than any recommendation of mine to secure recruits to the New Phoenix Society. DEREK VERSCIIOYLE.