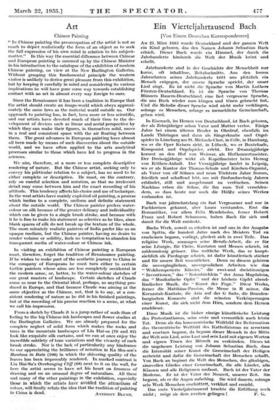 Chinese Painting " IN Chinese painting the preoccupation of the artist is not so much to depict realistically the form of an object as to seek the full expression of his own mind in relation to his subject- matter." In this way the essential difference between Chinese and European painting is summed up by the Chinese Minister in his introduction to the catalogue of the exhibition of modern Chinese painting, on view at the New Burlington Galleries. Without grasping this fundamental principle the western visitor is unlikely to derive great pleasure from this exhibition, but by keeping it carefully in mind and considering its various implications he will have gone some way towards establishing contact with an art in almost every way foreign to ours.

Since the Renaissance it has been a tradition in Europe that the artist should create an image-world which obeys approxi- mately the same laws as the material world outside us. Our approach to painting has, in fact, been more or less scientific, and our artists have devoted much of their time to the de- velopment of devices such as linear and aerial perspective by which they can make their figures, in themselves solid, move in a real and consistent space with the air floating between them. The great advances in European painting have almost all been made by means of such discoveries about the outside world, and we have often applied to the arts analytical processes similar to those which have led to progress in the sciences.

We aim, therefore, at a more or less complete descriptive rendering of nature. But the Chinese artist, seeking only to convey his particular relation to a subject, has no need to be either complete or descriptive. He must, on the contrary, rely on careful selection and notation, so that no irrelevant detail may come between him and the exact recording of his attitude. This tendency affects his choice and use of technique. In the west artists have mainly exploited oil painting, a process which incites to a complete, uniform and definite statement about the outside world. The Chinese painter prefers water- colour on silk because of the greater delicacy and individuality which can be given to a single brush stroke, and because with it he is free to make his statement as selective as he likes, since blank spaces of silk do not break up the texture of the whole. The more minutely realistic painters of India prefer like us an opaque medium, but the Chinese painter, having no desire to render volume or solidity, feels no temptation to abandon his transparent media of water-colour or Chinese ink.

In visiting an exhibition of Chinese painting a European must, therefore, forget the tradition of Renaissance painting. If he wishes to make part of the aesthetic journey to China in the company of Europeans he must turn either to certain Gothic painters whose aims are less completely occidental in the modern sense, or, better, to the water-colour sketches of our great masters of landscape. Certain sketches of Claude come as near to the Oriental ideal, perhaps, as anything pro- duced in Europe, and that because Claude was aiming at the same objective as the Chinese, not, that is to say, at a con- sistent rendering of nature as he did in his finished paintings, but at the recording of his precise reaction to a scene, at what we call his impression.

• From a sketch by Claude it is a jump rather of scale than of feeling to the big Chinese-ink landscapes and flower studies at the Burlington Galleries. We are already prepared for the complete neglect of solid form which makes the rocks and trees in the mountain landscapes of Liu Hai-su (70 and 82) look like exquisite silk curtains, and we can at once enjoy the incredible subtlety of tone variations and the vivacity of each brush stroke. Nor is the lack of particularity any hindrance to our appreciating the brilliance of notation in Ka Shu-sen's Bamboos in Rain (106) in which the shivering quality of the leaves has been impeccably rendered. In marked contrast is Liu Hai-Su's Overhanging Cliff (68) next to it on the wall, for here the artist seems to have set his heart on firmness of drawing and on an unusual degree of naturalism. All these and many of the other paintings in the exhibition, especially those in which the artists have avoided the attractions of

'colour, will finally refute the idea that the tradition of painting