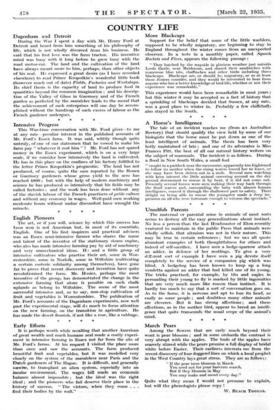 Intensive Progress This War-time conversation with Mr. Ford gives—to me

at any rate—peculiar interest in the published accounts of Mr. Ford's Essex farm. It was said, wittily though quite untruly, of one of our statesmen that he vowed to make his farm pay " whatever it cost him " ! Mr. Ford has not spared money in the Essex experiment, which is on a very large scale, if we consider how intensively the land is cultivated. He has in this place on the confines of his factory_ fulfilled to the letter Prince Kropotkin's prognostic. The land has not produced, of course, quite the sum reported by the Rouen or Guernsey gardeners whose gross yield to the acre has reached 2,800 ; but with the help of modern machinery and science he has produced so intensively that his fields may be called factories ; and the work has been done without any of the slavish labour of the French practisers of petite culture and without any economy in wages. Well-paid men working moderate hours without undue discomfort have wrought the