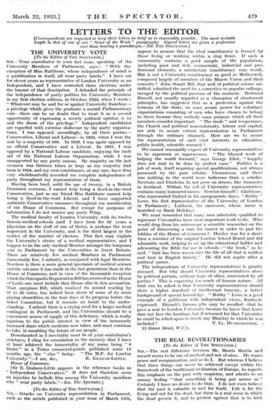 [To the Editor of Tae SPECTATOR.] -

SIR,—Attacks on University representation in Parliament, such as the article published in your issue of March 15th,

appear to assume that the ideal constituency is formed by those living or working within a ring fence. If such a community contains a good sample of the population, including poor and rich, commercial,, industrial and pro: , fessional elements, a satisfactory constituency may result. But is not a University constituency as good as Motherwell, composed. largely of members of the. Miners Union and their consorts ? John Stuart Mill, that well of political science un- defiled, admitted the need for a corrective to popular suffrage, ravaged by the political passions of the moment. Bertrand Russell, not usually regarded as a champion of obsolescent principles, has suggested that as a protection against the tyranny of the State, we must secure power for voluntary organizations consisting of men who have chosen to belong to them because they embody some purpose which all their members consider important. The trade " and temperance, the Church and political nonconformity, labour and capital, are able to secure virtual representation in Parliament, through the ordinary channels. How are we to. seeure the representation of such vital interests as education, public health, scientific research ?

We cannot reasonably expect all University representatives , to be supermen or superwomen. " The blessed work of helping the world forward," says George Eliot, " happily , does not wait to be done by perfect men." Politics is a job of work, itself requiring special qualifications, not always possessed by the pure scholar. Clemenceau said there was nothing in the world more ludicrous than a scholar. Newtons and Einsteins do not grow on straws, like bannocks in Scotland. Withal, the roll of University representatives contains many honoured names—Newton himself ; Gladstone, who represented Oxford in his unregenerate days ; "Bobby " Lowe,, the first representative of the University of London in Parliament ; Lubbock, his successor, whose name is beatified on Bank Holidays.

We must remember that many men admirably qualified to represent Universities have more important work to do. Who would drag from his microscope a scientific researcher on the point of discovering a cure for cancer in order to pad the lobbies of the House of Commons ? Huxley was for a short time a member of the original London School Board and did adniirable work, helping to set up the educational ladder and advocating the Bible for use in schoo• ls--L" the book," as he said, " that has been woven into the life of all that is noblest and best in English history." He did not aspire after a political career.