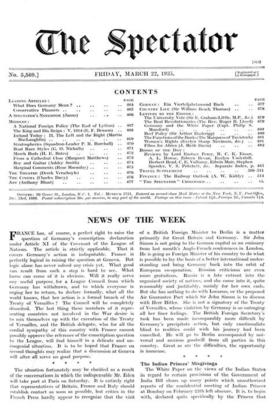 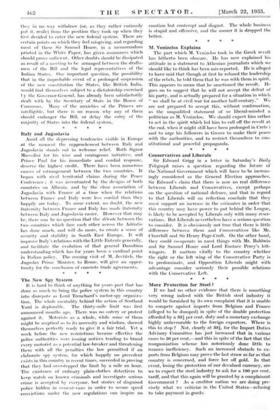 Page 1, 22 March 1935 — The Indian Princes' Misgivings The. White Paper on the views
Close

The Indian Princes' Misgivings The. White Paper on the views

of the Indian States in regard to certain provisions of the Government of India Bill clears up many points which unauthorized reports of the confidential meeting of Indian Princes at Bombay on February 25th left obscure. It is, to begin with, declared quite specifically by the Princes that they in no way withdraw (or, as they rather curiously put it, resile) from the position they took up when they first decided to enter the new federal system. There arc certain points on which they feel misgiving, and regarding most of these Sir Samuel Hoare, in a memorandum printed in the White Paper, has given assurances which should prove sufficient. Other doubts should be dissipated as result of a meeting to be arranged between the drafts- men of the Bill and the legal representatives of the Indian States. One important question, the possibility that in the improbable event of a prolonged suspension of the new constitution the States, like British India, would find themselves subject to a dictatorship exercised 1 y the Governor-General, has already been satisfactorily dealt with by the Secretary of State in the House of Commons. Many of the anxieties of the Princes arc intelligible, but there is no reason why any of them should endanger the Bill, or delay the entry of the majority of States into the federal system.