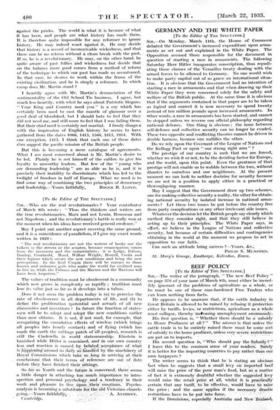 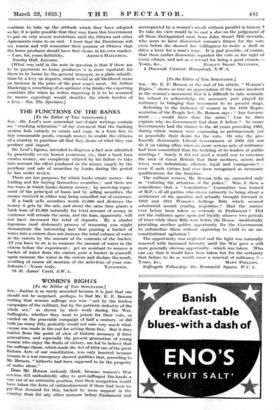 BEEF POLICY [To the Editor of THE SPECTATOR.] SIR,—The writer

of the paragraph, " The new Beef Policy " on page 378 of your issue of March. 8th, must either be incred- ibly ignorant of the problems of agriculture as a whole, or he must be one of those case-hardened Free Traders who can learn nothing from facts.

He appears to be unaware that, if the cattle industry in Great' Britain is allowed to be ruined by refusing it protection either by tariffs, levies,' or restrictiona, agriculture as a Whole must collapse, thereby ineteasing unemployment enormously.

His first question is, Whether there should be a' subsidy to Home Produceri at all ? " The answer is that unless' the cattle trade is to be entirely ruined there must be some sort of subsidy to the home producer, unless very severe restrictions are put on to imports. '

His second question. is, "Who should pay the Syhsidir? " I leave this to •the common sense of your readers: 5tirely it is better for the importing 'countries to pay rather than our own taxpayers ?

The writer seems to think that he is stating an obvioui fact when he suggests that a small levy on' imported' beef will raise the price of the poor man's food, but as it matter of fact it is extremely doubtful whether the suggested levy would raise the retail price at all, whilst it is practicallY certain that any tariff, to be effective, would have to raise the price ; and the same applies if the necessary drastic restrictions have to be put' into- force. •

If the Dominions, especially Australia and New Zealand, continue to take up the attitude which they have adopted so far, it is quite possible that they may force this Government to put on very severe restrictions until the Ottawa and other Agreements come to an end. I trust that the Dominions will see reason and will remember their promise at Ottawa that the home producer should have first choice in his own market.

[What was said in the note in question is that if there are to be payments to home producers it is more equitable for them to be borne by the general taxpayer, as a plain subsidy, than by a levy on imports, which would in all likelihood mean an increase in the price of the poor man's meat. Sir Arthur Hazlerigg is something of an optimist if he thinks the exporting countries (for when he writes importing it is to be assumed he means exporting) would shoulder the whole burden of a levy.—En. The Spectator.]