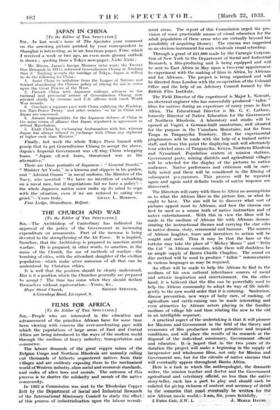 THE CHURCH AND WAR

[To the Editor of TIIE SPECTATOR.]

SIR,—The Archbishop of Canterbury has indicated his approval of the policy of the Government in increasing expenditure on armaments. Part of the increase is being devoted to the strengthening of the Air Force. It is implied, therefore, that the Archbishop is prepared to sanction aerial warfare. He is prepared, in other words, to sanction, in the name of the Church, the use of methods of warfare—the bombing of cities, with the attendant slaughter of the civilian population—which make utter nonsense of all that can be Understood by Christian ethics.

It is well that the position should be clearly understood. But is it a poiition which the Churches generally are prepared to accept ? The time has come when they should declare themselves without equivocation.—Yours, &c.,