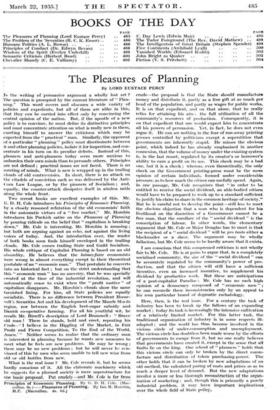 The Pleasures of Planning

By LORD EUSTACE PERCY Is the writing of persuasive argument a wholly lost art ? The question is prompted by the current literature of " Plan- ning." This word covers and obscures a wide variety of policies and expedients, but all of them are alike in this, that they can be carried into effect only by convincing the central opinion of the nation. But, if the apostle of a new policy is to convince, he must define its distinctive principles and must concentrate attention on what is really new in them, exerting himself to answer the criticisms which may be expected from the " practical " man. Similarly, the opponent of a particular " planning " policy must discriminate between it and other planning policies, isolate it for inspection, and con- centrate in his turn on its peculiar defects. Instead of this, planners and anti-planners today seem more anxious to unburden their own minds than to persuade others. Principles are not defined ; practical issues are not faced. There is no meeting of minds. What is new is wrapped up in the trailing clouds of old controversies. In short, there is no attack on the citadels of conviction such as was delivered by the Anti- Corn Law League, or by the pioneers of Socialism ; and, equally, the counter-attack dissipates itself in aimless raids along the whole front.

Two recent books are excellent examples of this. Mr. G. D. H. Cole introduces his Principles of Economic Planning, by a closely reasoned refutation of the old economists' faith in the automatic virtues of a " free market." Mr. Horobin introduces his Puckish satire on the Pleasures of Planning by pouring ridicule on the belief that " capitalism is breaking down." Mr. Cole is interesting, Mr. Horobin is amusing ; but both are arguing against an echo, not against the living voices of today. And, the introduction over, the reader of both books soon finds himself enveloped in the trailing clouds. Mr. Cole comes trailing State and Guild Socialism. His whole critique of Capitalist Planning is based on an old absurdity. He believes that the laissez-faire economists were wrong in almost everything except in their theoretical postulate of an " economic man." That postulate he converts into an historical fact ; but on the strict understanding that this " economic man " has no ancestry, that he was specially created at the time of the industrial revolution, and will automatically cease to exist when the " profit motive " of capitalism disappears. Mr. Horobin's clouds show the same famished lining. For him, all State policies are equally socialistic. There is no difference between President Roose-- welli Securities Act and his development of the Muscle Shoals region, nor between the English beet-sugar subsidy and Danish co-operative farming. For all his youthful wit, he recalls Mr. Birrell's description of Lord Bramwell : " Brave old man ! There he stands, bold and erect, repeating his Credo—' I believe in the niggling of the Market, in Fair Profit and Fierce Competition, To the End of the World, Amen.' " Neither seems to realize that the ordinary man is interested in planning because he wants new measures to meet what he feels are new problems. He may be wrong ; there may be no new problems ; but he will never b con- vinced of this by men who seem unable to tell new wine from old or old bottles from new.

What is the real issue ? Mr. Cole reveals it, but he seems hardly conscious of it. All the elaborate machinery which he suggests for a planned society is mere superstructure for

the basic proposal. Put crudely—and Mr. Cole is far from Principles of Economic Planning. By G. D. H. Cole. (Mac- millan. 6s.)—Pleasures of Planning. By Ian M. Horobin, M.P. (Macmillan. 4s. 6d.) crude—the proposal is that the State should manufacture money and distribute it, partly as a free gift at so much per head of the population, and partly as wages for public works. It is on that expedient, and on that alone, that he really relies for attaining his aim : the full utilization of all the community's resources of production. Consequently, it is on that expedient that one would expect him to concentrate all his powers of persuasion. Yet, in fact, he does not even argue it. He can see nothing in the fear of run-away printing presses controlled by politicians except a superstition that governments are inherently stupid. He misses the obvious point, which indeed he has already emphasized in another connexion, that the volume of money under the existing system is, in the last resort, regulated by its creator's or borrower's ability to earn a profit on its use. This check may be a bad one, but it is a check ; whereas, even theoretically, the only check on the Government printing-press must be the mere opinion of certain individuals, formed under considerable pressure, as to how much the citizen can usefully spend. Again, in one passage, Mr. Cole recognizes that " in order to be entitled to receive the social dividend, an able-bodied citizen would have to be prepared to work up to a standard sufficient to justify his claim to share in the common heritage of society." But he is careful not to develop the point—still less to meet the obvious objection that a man who is dependent for his livelihood on the discretion of a Government cannot be a free man, that the corollary of the " social dividend " is the conscription of labour. In other words, the elementary argument that Mr. Cole or Major Douglas has to meet is that the recipient of a " social dividend " will be pro tanto either a blackmailer or a slave. The argument may be wholly fallacious, but Mr. Cole seems to be hardly aware that it exists.

I am conscious that this compressed criticism is not wholly fair to Mr. Cole. lie is at pains to argue that, in a completely socialized community, the size of the " social dividend " can be accurately regulated by the community's power of pro- duction, and that the citizen will still have a sufficient incentive, even an increased incentive, to supplement his dividend by productive work. But these are anticipations of a post-capitalist Paradise ; Mr. Cole has no such high opinion of a democracy composed of " economic men " ; he can reconcile these inconsistencies only by an appeal to his own particular brand of dogmatic eschatology.

Here, then, is the real issue. For a century the task of industry has been to break up the follows of an expanding market ; today its task is increasingly the intensive cultivation of a relatively limited market. For this latter task, the traditional organization of industry is in some respects ill- adapted ; and the world has thus become involved in the vicious circle of under-consumption and unemployment. The vicious circle has doubtless been made worse by the efforts of governments to escape from it, but no one really believes that governments have created it, except in the sense that all faults lie on the king. One school of " planners " holds that this vicious circle can only be broken by the direct manu- facture and distribution of token purchasing-power. The other holds that it can be broken by new adaptations of an old method, the calculated paring of costs and prices so as to reach a deeper level of demand. But the new adaptations

involve a more or less thorough reconstruction of the organ- ization of marketing ; and, though this is primarily a purely industrial problem, it may have important implications over the whole field of State policy.