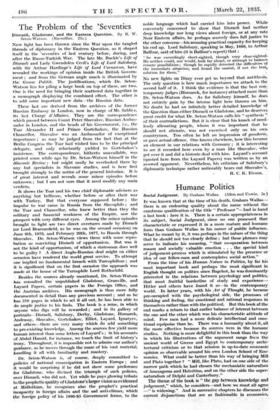 Social Judgment. By Graham Wallas. (Allen and Unwin. 5s.) IT was known that at the time of his death, Graham Wallas— there is an endearing quality about the name without the cumbrous qualification of the title " Professor "—had in band a last book : here it is. There is a certain appropriateness in its subject, Social Judgment, since no one possessed that characteristic or expressed it in a more mature and humane form than Graham Wallas in his career of public influence. What he meant by it, it was perhaps in the nature of the thing that he should not too closely define ; but these phrases may serve to indicate his meaning, " that co-operation between reason and socially valuable emotion . . . the special kind of judgement-process which is stimulated by the presence or idea of our fellow-men and contemplates social action."

From the time of his Human Nature in Politics, by far his most important book and perhaps the most significant in English thought on politics since Bagehot, he was dominantly interested in the relations between psychology and politics,- that most fruitful borderline of study and experience— Hitler and others have found it so—in the contemporary world. -In latter years, with his Art of Thought, he became pre-occupied with the psychological side, the processes of thinking and feeling, the emotional and rational responses in themselves rather than with the political. But this book atthe end marks a return to that earlier balance of interest between the one and the other which was his characteristic attitude of mind. Few men had a more delicate intellectual and emo- tional equipoise than he. There was a humanity about it, all the more effective because its sources were in the humane studies. Nothing is more delightful in this book than the way in which his illustrations of the argument range from the ancient world of Greece and Egypt to contemporary archi- tectural criticism or to that scission in up-to-date economic opinion so observable around- his own London School of Eco- nomics. What could be better than his way of bringing Mill and Plat() together Y " Mill, like Plato, had on one side of the narrow path which he had chosen the mechanistic naturalism of Anaxagoras and Helvetius, and on the other side the super- naturalism of Delphi and Canterbury."

The theme of the book is " the gap between knowledge and

judgement," which, he considers—and here we must all agree —" is widening." And in successive chapters he discusses the current disjunction that are so fashionable in economics, piyehology and science, between what is alone considered scientific (on a very narrow interpretation of it, of which too

they make such a fetish what is capable of measure- ment —and all other aspects which are non-measurable though they may well be more important. Against Professor Lionel Robbins he scores shrewdly, for example, in isolating that " tendency of the teacher to assume that a division of his subject-matter due to pedagogic convenience must necessarily represent a division in the real world of causes and effects." But he is no less concerned to redress the balance with Pro- fessors Hogben and Eddington. It is amusing to regard the kindly malice with which be puts them all, loudly disagreeing, into the same pen.

The book as we have it is only the first half of what he intended, though it is complete in itself. It would have gone onto include chapters on Government, Property and Inter- national Organization. It has been skilfully edited by his datighter and makes a valuable little book, as original—and his was an originating mind—as any he wrote.