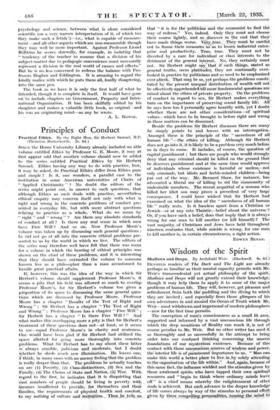 SINCE the Home University Library already included an able volume entitled Ethics by Professor G. E. Moore, it may at first appear odd that another volume should now be added to the series entitled Practical Ethics by Sir Herbert Samuel. Ethics having any way to do with practice, how, it may be asked, do Practical Ethics differ from Ethics pure and simple ? Is it, one wonders, a parallel case to the institution in some American universities of Chairs of " Applied Christianity " ? No doubt the editors of the series might point out, in answer to such questions, that although Ethics as such deals with practice, nevertheless ethical enquiry may concern itself not only with what is right and wrong in the concrete problems of conduct pre- sented in everyday life, but with more abstract questions relating to practice as a whole. What do we mean by " right " and " wrong " ? Are there any absolute standards of conduct at all ? Is there any real sense in which men have Free Will ? And so on. Now Professor Moore's volume was taken up by discussing such general questions : he did not go at all into the concrete ethical problems pre- sented to us by the world in which we live. The editors of the series may therefore well have felt that there was room for a volume in which the bearing of ethical principles was shown on the chief of these problems, and it is interesting that they should have entrusted the voluine to someone known less as a philosopher than a man accustomed to handle great practical affairs.

If, however, this was the idea of the way in which Sir Herbert's volume should supplement Professor Moore's, it seems a pity that his field was allowed so much to overlap Professor Moore's, for Sir Herbert's volume too gives a proportion of its space to discussing the same general ques- tions which are discussed by Professor Moore. Professor Moore has a chapter Results of the Test of Right and Wrong " ; Sir Herbert has a chapter " The Test of Right and Wrong " ; Professor Moore has a chapter " Free Will " ; Sir Herbert has a chapter " Is there Free Will ? " And what makes this overlapping more a pity is that Sir Herbert's treatment of these questions does not—at least, so it seems to me—equal Professor Moore's in clarity and acuteness. One would have been glad if Sir Herbert had utilized the space allotted for going more thoroughly into concrete problems. What Sir Herbert has to say about these latter is always sensible, judicious and moderate, but I doubt whether he sheds much new illumination. He leaves one, I'think, in many cases with an uneasy feeling that the problem is really deeper than that. The problems he actually touches on are (1) Poverty, (2) Class-distinctions, (8) Sex and the Family, (4) The Claims of State and Nation, (5) War. With regard to the first, he indicates that it is disquieting that vast numbers of people should be living in poverty . with incomes insufficient to provide, for themselves and then: fainilies, the requirements of physical health and comfort, The conception of man's consciousness, as a, small lit area, supported and informed by a vast unconscious life through, which the deep monitions of -Reality can reach it, is not of course peculiar to Mr. Weir. But no other writer has used it so thoroughly and so successfully in the attempt to bring order into our confused thinking concerning the unseen foundations of our mysterious existence. Because of this contact with those unconscious sources of wisdom and power, the interior life is of paramount importance to us. " Man can make this world a better place to live in .by solely attending to the organization of the life within." And, again, because of this same fact, the influence wielded and the stimulus given by, those awakened spirits who have tapped their own spiritufil resources and " begin to think where ordinary minds leave off " is a chief means whereby the enlightenment of other shuts is achieved. But such advance in the deeper knowledge of life comes always by way of the stimulus to personal effott to say nothing of culture and recreation., Thep be te116 m„ ,Even by these comelling.personalities,..rousing the mind t9 that " it is for. the politician- 'Mid the economist to find the way of redress." Yes, indeed. Only they must not choose their course lightly, and so discover in the end that they have made things worse. Very„true.' They must be careful _

not to frame their measures so as to lesSen industrial enter- prise and productivity. True, true. They must not be

diverted by a care for individual or class interests to the detriment of the general interest. No, they certainly must not. Sir Herbert might siiy:that- if such things, stated as general truths, seem platitudes', they are continually over- looked in practice by politicians and so need to be emphasized- ever afresh. That max be so, yet.perhaps the problems consti tuted by the present unequal distribution of wealth-will not be effectively apprehended till more fundainental questions are raised about the ethics of private property. On the problems of conduct in regard to -sex, Sir Herbert makes everything turn on the importance of preserving sound family life. All' he says here too I personally agree heartily with, 'yet I doubt- whether there are not other considerations—of spiritual values—which have to be brought in before right and wrong in those matters can be discerned.

Beside the problems Sir Herbert discusses there are many he simply points to -and leaves with an interrogation.

Amongst these is the principle of the " sacredness of all human life "—the ethics of killing. Although Sir Herbert does not go into it, it is likely to be a problem very much before us in days to come. It includes, of course, the question of capital puniShment but there are people who would strongly, deny that any criminal should be killed on the ground that he deserves punishment and at the same time would approve of individuals whose existence is harmful or useless—not only criminals, but idiots and feeble-minded children—being put out of the way. Mr. Bernard Shaw, for instance, has

advocated a liberal use of killing to rid the -Community of undesirable members, The recent acquittal of a woman who

killed her idiot son may "prove a precedent of very large consequence. I could have wished that Sir Herbert had' examined on what the idea of the " sacredness of all human life " really rests. Is it baseless apart from a Christian or