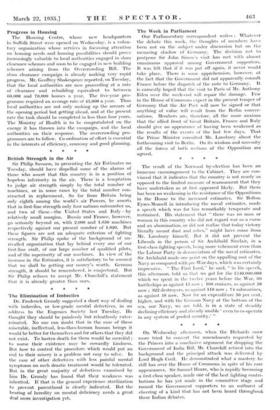 Page 3, 22 March 1935 — On Wednesday afternoon, when the Diehards once more tried to
Close

On Wednesday afternoon, when the Diehards once more tried to

convert the amendments requested by the Princes into a conclusive argument for dropping the Government of India Bill, Mr. Churchill retired into the background and the principal attack was delivered by Lord Hugh Cecil. Ile demonstrated what a mastery he still has over the House of Commons in spite of his rare appearances. Sir Samuel Hoare, who is rapidly becoming a first-class speaker, made one of the. best fighting contri- butions he has yet made in the committee stage and roused the Government supporters to an outburst of cheering of a kind that has not been heard throughout these Indian debates.