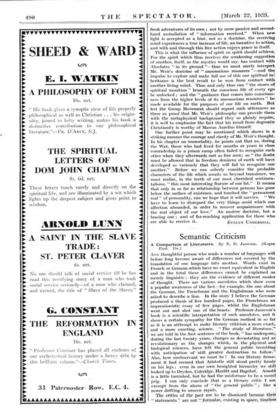 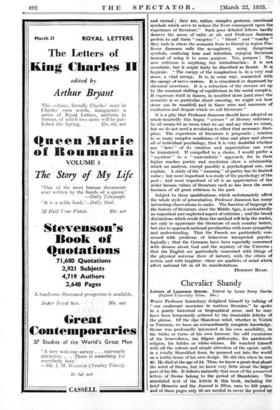 ANY thoughtful person who reads a number of languages will before long become aware of differences not covered by the translation of one language into another. Words exist in French or Germaa.which' have no exact equivalent in English and in the total these differences cannot be explained as merely linguistic ;- they are the evidence of different modes of thought. There are various anecdotes which show even a popular awareness of the fact—for example, the one about the German, the Frenchman and the Englishman .who were asked to describe a lion. In the story I believe the German produced a. thesis of five hundred pages, the Frenchman an impressionistic essay of five pages, whilst the Englishman went out and shot one of the beasts. Professor Jameson's book is a scientific interpretation of such anecdotes, and it shows a certain sympathy for the German method in so far as it is an atttempt to make literary criticism a more exact, and a more exacting, science.. " The study of literature," we are told in the first sentence of the book, " has undergone; during the last twenty years, changes as devastating and a* revolutionary as the changes which,. in the physical and biological sciences, have left the general public trembling with anticipation of still greater destruction to follow."; Alas, how unobservant we must 'be ! In our litefary firma-, ment it had seemed that Aristotle still stood pretty firmly on his legs ; even in our own benighted hierarchy we still looked up to Dryden, Coleridge, Hazlitt and Bagehot. Arnold is a little tarnished, but he had the misfortune to be a moral prig. I. can only conclude that as a literary critic I am exempt from the alarm of " the general public " ; like a rower drifting to unseen rapids.

The critics of the past are to be dismissed because their "-statements " are not'''. formulae, existing in space, timeless and eternal ; they are, rather, complex gestures, emotional symbols which serve to reduce the fever consequent upon the experience of literature." Such poor deluded fellows hardly deserve the name of -critic at all, and Professor Jameson prefers to call them " exegetes " ; " bland " and " touchy " they rush in where the semantic fears to thread (a region Pro- fessor Jameson calls the no:osphere), using dangerous symbols, confusing tone and intention, enjoying literature instead of using it to some purpose. Yes, purpose ! The new criticism is anything but latitudinarian ; it is not moralistic, but it might fairly 'be described as fascist. It is hygienic. " The energy. of the imagination is, in a very real sense, a vital energy. It is, in some way, connected with the energy of nerve centres. it-is stimulated or depressed by chemical secretions. It is a refraction of the stresses set up by the constant shifting of equilibrium in the social complex. It expresses itself in_ dances, in moulded stone Tend since the semantic is so particular about meaning, we might ask how stone can be moulded} and in those cries- and murmurs of exultation and despair which we call literature."

It is a pity that Professor Jameson should have adopted so whole-heartedly this bogus " science " of literary criticism ; by all means let us mean what we say and say what we mean, but we do not need a revolution to effect that necessary disci- pline. The experience of literature is pragmatic ; relative to so many complex conditions of time and place and above all of individual psychology, that it. is very doubtful whether any " laws " of its creation and appreciation can ever be fiirmulated. If compelled to a choice, I would prefer a " mystical " to a " materialistic " approach, for in their higher reaches poetry and mysticism show a relationship which no analysis, except possibly a psychological one, can explain. A study of the meaning " of poetry has its limited value ; but more important is a study of the psychology of the poet ; and most important of all is an appreciation of the wider human values of literature such as has been the main business of all great criticism in the past.

Subject to these qualifications, which unfortunately affect the whole style of presentation, Professor Jameson has many interesting observations to make. The function of language in the history of literature, since the Middle Ages, is undoubtedly an important and neglected aspect of criticism ; and the broad distinctions which result from the method will help the reader, not only to appreciate the literature of each country better, but also to approach national peculiarities with more sympathy and understanding. That the French are particularly con- cerned with problems of behaviour interpreted psycho- logically ; that the Germans have been especially concerned with dreams about God and the mystery of the Universe ; that the English are particularly concerned with things of the physical universe (love of nature), with the ethics of action, and with laughter—these are qualities of mind which affect national life in all its manifestations.