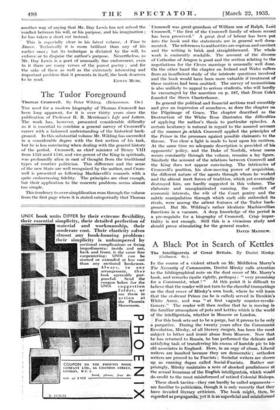 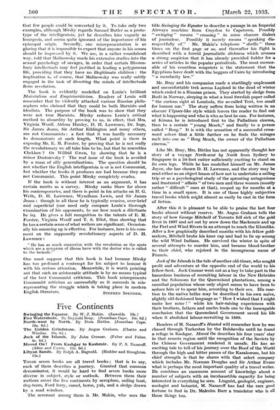 A Black Pot in Search of Kettles

The Intelligentsia of Great Britain. By Dmitri Mirsky. (Gollanez. Cs.).

IN the course of a violent attack on Mr. Middleton Murry's The Necessity of Communism, Dmitri Mirsky calls attention to .the bibliographieal note on the dust cover of Mr. Murry's book, and remarks (quite rightly, perhaps) : " very promising for a Communist, what ! " .At this point it is difficult to believe that the reader will not turn to the cheerful trumpetingS on the dust cover of Mirsky's own book, where he will learn that the ci-devant Prince (as he is called) served in Denikhes White Army, and was " at first vaguely counter-revola- tionary." The reader will then realize that he is moving in the familiar atmosphere of pots and kettles which is the world of the intelligentsia, whether in Moscow. or London.

For this book sets out to be a purge, but it proves to be only a purgative. During the twenty. years after the dommuniat Revolution, Mirsky, of all literary emigres, has been the most subject to bitter and ironic abuse from Moscow. Now that he has returned to Russia, he has performed the delicate and Satisfying task of transferring his excess of humble pie to his old associates in England: Here, in an orgy of abuse, Liberal Writers are insulted' because they are democratic ; orthodox writers are proved to be Fascists ; Socialist writers are shown up as cunning dupes called. Social-Fascists. Rather sur- prisingly, Mirsky maintains a note of shocked prudishness at the sexual looseness of the English intelligentsia, which would do credit to the most misinformedpf retired Colonial Bishops.

These shock tactics—they can hardly be called arguments— are familiar to politicians, though it is only recently that they have invaded literary eriticism. The book might, then,, be regarded gapropvtn—u-strit is so superfieig and OlsfIIfvrinsd

that few people could be converted by it. To take only two examples, although Mirsky regards Samuel Butler as a proto- type of the intelligentsia, yet he describes him vaguely as bourgeois, and seems quite ignorant of the importance of his episcopal origin. Secondly, one misrepresentation is so glaring that it is impossible to expect that anyone in his senses should be impressed by it. We are, in a rather roundabout way, told that Malinowsky made his extensive studies into the sexual psychology of savages, in order that certain Blooms- bury intellectuals may feel justified in leading a polygamous life, providing that they have no illegitimate children : the implication is, of course, that Malinowsky was really subtly engaged in the task of diverting the minds of intellectuals from revolution.

The book is evidently modelled on Lenin's brilliant Materialism and Empiriocriticism. Readers of Lenin will remember that he violently attacked various Russian philo- sophers who claimed that they could be both Marxists and idealists. The purpose of the book was to show that they were not true Marxists. Mirsky reduces Lenin's critical method to absurdity by proving to us, in effect, that Mrs. Virginia Woolf, Aldous Huxley, D. H. Lawrence, Dr. Inge, Sir James Jeans, Sir Arthur Eddington and many others, are not Communists : a fact that it was hardly necessary to demonstrate at such length. What point is there in exposing Mr. E. M. Forster, by proving that he is not really the revolutionary we all take-him to be, but that he resembles Chekhov ? Or Wilfrid Owen, by showing that he is a minor Dostoievsky ? The real issue of the book is avoided by a mass of silly generalizations. The question should be not whether the English intelligentsia is or is not Communist, but whether the books it produces are bad because they are not Communist. This point Mirsky completely evades.

If the book is without interest as an argument, it has certain merits as a survey. Mirsky ranks Shaw far above his contemporaries, and there is point in his attacks on H. G. Wells, D. H. Lawrence, Wyndham Lewis, and Sir James Jeans : though in all these he is typically evasive, over-brief and superficial (one need only compare Lenin's thorough examination of his opponents, to see how much a dilettante he is). He gives a full recognition to the talents of E. M. Forster, Virginia Woolf and T. S. Eliot, thus showing that he has a certain sense of what writers are significant. Occasion- ally his summing up is effective. For instance, here is his com- ment on the supposedly revolutionary aspects of D. H. Lawrence : " He has as much connexion with the revolution as the spots which are a symptom of illness have with the doctor who is called to the bedside."

One must suppose that this book is bad because Mirsky has too profound a contempt for his subject to honour it with his serious attention. Meanwhile, it is worth pointing out that such an aristocratic attitude is by no means typical of the best Communist criticism. This book misrepresents Communist criticism as successfully as it succeeds in mis- representing the struggle which is taking place in modem