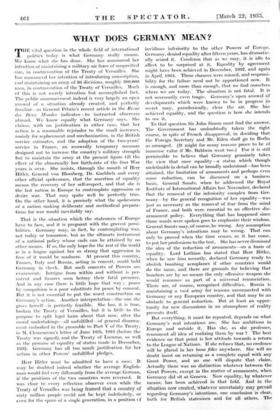 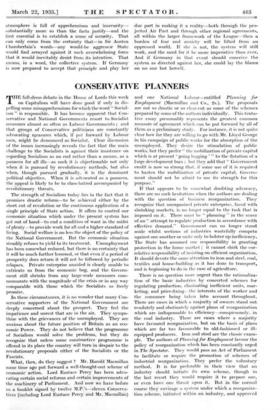 WHAT DOES GERMANY MEAN?

THE vital question in the whole field of international politics today is what Germany really means. We know what she has done. She has announced her intention of maintaining a military air force of unspecified size, in contravention of the Treaty of Versailles. She has announced her intention of introducing conscription, and maintaining an army of 36 divisions, roughly 500,000 men, in contravention of the Treaty of Versailles. Much of this is not merely intention but accomplished fact. The public announcement indeed is very largely an open avowal of a situation, already created, and perfectly familiar—as General Petain's recent article in the Revue des Deux Mondes indicates—to instructed observers abroad. We know equally what Germany says. She claims, with no justification in either case, that her fiction is a* reasonable rejoinder to the small increases, mainly for replacement and mechanization, in the British service estimates, and the adoption of the two-years' service in France, an avowedly temporary measure designed not to increase the country's military strength but to maintain the army at the present figure till the effect of the abnormally low birth-rate of the four War years is over. She insists,. through the mouth of Herr Hitler, General von Blomberg, Dr. Goebbels and every other official spokesman, that the assertion of equality means the recovery of her self-respect, and that she. is the last nation in Europe to contemplate aggression or desire war. That may quite well be perfectly true. On the other hand, it is precisely what the spokesmen of a nation making deliberate and methodical prepaia- tions for war would inevitably say.

That is the situation which the statesmen of Europe have to face, and it is pregnant with the gravest possi- bilities. Germany may, in fact, be contemplating war, not today or tomorrow, but as the ultimate instrument of a national policy whose ends can be attained by no other means. If so, the only hope for the rest of the world is in a league against her so strong that aggression in face of it would be madness. At present this country, France, Italy and Russia, acting in concert, could hold Germany in cheek. But such concerts of Powers are evanescent. Intrigue from within and without is per- sistent and fissures soon betray their fatal presence. And in any case there is little hope that way ; peace by compulsion is a poor substitute for peace by consent. But it is not essential to put the worst construction on Germany's action. Another interpretation—the one she gives herself—is perfectly feasible. She has, it is true, broken the Treaty of Versailles, but it is little to the purpose to split legal hairs about that now, after the moral undertakings—all unfulfilled—of general disarma- ment embodied in the preamble to Part V of the Treaty, in M. Clemenceau's letter of June 16th, 1919 (before the Treaty was signed), and the Treaty of Locarno, as well as the promise of equality of status made in December, 1932. Germany has all too much justification for her action in other Powers' unfulfilled pledges.

Herr Hitler must be admitted to have a case. It may be doubted indeed whether the average English- man would feel very differently from the average German, if the positions of the two countries were reversed. It was clear to every reflective observer even while the Treaty of Versailles was being framed that a country of sixty million people could not be' kept indefinitely, or even for the space of a single generation, in a position cf invidious inferiority to the other Powers of Europe. Germany, denied equality after fifteen years, has dramatic- ally seized it. Condemn that as we may, it is idle to affect to be surprised at it. Equality by agreement might have been achieved in December, 1982, and again in April, 1934. Those chances were missed, and responsi- bility for the failure need not be apportioned now. It is enough, and more than enough, that we find ourselves where we are today. The situation is not fatal. It is not necessarily even tragic. Germany's open avowal of developments which were known to be in progres4 in secret may, paradoxically, clear the air. She his achieved equality, and the question is how she intends to use it.

To that question Sir John Simon must find the answer. The Government has undoubtedly taken the right course, in spite of French disapproval, in deciding that the Foreign Secretary and Mr. Eden shall go to Berlin as arranged. (It might for many reasons prove to be of immense value if Mr. Baldwin went too.) For it is still permissible to believe that Germany genuinely takes the view that once equality—a status which though undefinable in detail can be broadly understood—has been attained, the limitation of armaments and perhaps even some reduction, can be discussed on a business basis. General Smuts, when he addressed the Royal Institute of International Affairs last November, declared that the removal of the inferiority complex from Ger- many—by the general recognition of her equality—was just as necessary as the removal of fear from the mind of France, and both were essential to an effective dis- armament policy. Everything that has happened since those words were spoken goes to emphasize their wisdom. General Smuts may, of course, be wrong. Any assumption about Germany's intentions may be wrong. That can only be proved when the time comes, as it has come, to put her professions to the test. She has never dismissed the idea. of the reduction of armaments—on a basis of equality. Lord Lothian has stated that Herr Hitler, when he saw him recently, declared Germany ready to abolish bombing aeroplanes if other countries would do the same, and there are grounds for believing that bombers are by no means the only offensive weapon she would renounce as part of a universal renunciation. There are, of course, recognized difficulties. Russia is maintaining a vast army for 'reasons unconnected with Germany or any European country, and that may be an obstacle to general reduction. But at least an oppor- tunity for new discussions in an atmosphere of reality presents itself.

But everything, it must be repeated, depends on what Germany's real intentions are. She has ambitions in Europe and outside it. ' Has she, as she professes, renounced all idea of realizing them by war ? The best evidence on that point is her attitude towards a return to the League of Nations. If she refuses that, credence will be placed in her bona fides anywhere. She. will no doubt insist on returning as a complete equal with any Great -Power, and no one will dispute that claim. Actually there was no distinction whatever between the Great Powers, except in the matter of armaments, when Germany did sit at Geneva. Now equality, by whatever means, has been achieved in that field. And in the situation now created, whatever uncertainty may prevail regarding Germany's intentions, one conclusion is clear, both for British statesmen and for all others. The atmosphere is full of apprehensions and insecurity— substantially more so than the facts , justify—and the first essential is to establish a sense of security. That can only come from the certainty that—in Sir Austen Chamberlain's words—any would-be aggressor State would find arrayed against it such overwhelming force that it would inevitably desist from its intention. That means, in a word, the collective system. If Germany is now prepared to accept that principle and play her due part in making it a reality ..both through the pro- jected,Air Pact and through other regional agreements, all within the larger framework of the League—then a burden of fear and anxiety will be lifted from an oppressed world.. If she is not, the system will still work, and the need for it be more imperative than ever. And if Germany in that event should conceive the system as directed against her, she could lay the blame on no one but herself.