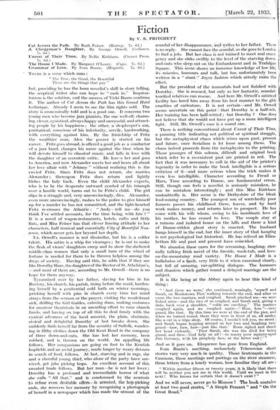 THERE is a verse which MIS :

" The True, the Good, the Beautiful Those are the things that pay "

but, providing he has the born novelist's skill in story. telling, the sceptical Writer also can hope to " cash in." Impress- ionism is the solution, and the success of Vicki Baum confirms it. The author of Cat Across the Path has this Grand Hotel technique. Already I. seem to: see the film rights sold. The story is economically told and is a good one. It concerns two young men who become jazz pianists, the one well-off, charm- ing, clever, egoistical, always happy and successful, and attract- ing people by. his happiness ; the other, a 'shopkeeper's son, puritanical, conscious of his inferiority, servile, hardworking, with everything against him. By the friendship- of Fritz

the wealthier man, Alex the poorer is started ' on his career. Fritz goes abroad, is offered a good job as a conductor of a jazz band, changes his name against the time when he will devote himself to classical music, and falls in love with the daughter of an eccentric critic. He leav rs her and goes to America, and now Alexander meets her and hears all about her love affair with " Johnny " without realizing this is the envied Fritz. Since Fritz does not return, she marries Alexander ; thereupon Fritz does return and lightly filches the lady back. Even the child Alexander expects, who is to be the desperate outward symbol of his triumph over IC hostile world, turns out 'to be Fritz's child. The girl slips in a struggle and, very unconvincingly, dies. Alexander, even more unconvincingly, rushes to the police to give himself up for a-murder he has not committed, -and the .light-hearted

think I've settled accounts, for the time being, with fate ? "

It is a novel of wagon-restaurants, hotels, cafés' and little fiats, and Miss Feiner has thrifelever fencing attitude to her characters, half ironical and essentially City of Beautiful Non- sense, which never gets her beyond her depth.

Yr. Orwell's manner is not dissimilar, but his is a colder

talent.: His satire is a whip for vicarages ; he is out to make the flesh.of vicars' daughters creep and .to .show the sheltered middle-class women that 'only a small turn of the wheel of fortune is needed for them- to be thrown helpless among the dregs of society. Having said this, he adds that if they are like Dorothy Hare, the daughter of the Rector of St. Athelstants, —and most of them are, according to Mr. Orwell—there is no

hope for them anyway.

Tyrannized over by her father, slaving for him in his

Rectory; his church, his parish, rising before the maid, harden- ing herself by a penitential cold bath on' winter mornings, pricking herself with pins in church every time her mind strays from the sermon or the prayer, visiting the recalcitrant sick -drilling the Girl Guides, calming duns, making costumes

for amateur theatricals in an unending effort to raise church funds, and having on top of all this to deal firmly with the cynical advances of the local amorist, the plain, obstinate, stoical and delightful Dorothy at last breaks down. She

suddenly. finds herself far from the security of Suffolk, wander- ing hi filthy clothes down the Old Kent Road in the company of three down-and-outs. She has lost her memory, been robbed; :and is thrown on the world. An appalling life follows. Her companions are going on foot to the Kentish hopfields and an awful journey, made longer by weary detours in search of food, follows. At last, starving and in rags, she and a cheerful young thief, who alone of the party have sur- vived, get jobs picking hops. An excellent account of this sweated- trade follows. But her man—he is not her lover ; Dorothy has a profound and irremediable horror of what she calls " All that," and is condemned by the neurosis to refuse even desirable offers—is arrested, the hop-picking ends, she recovers her memory by recognizing a photograph of herself in a newspaper which has made the utmost of the scandal of her disappearance, and Writes to her father.. There is no reply. She cannot face the scandal, so she goes to London

gency and she sinks swiftly to theleVel of the starving down. and-outs who sleep out on the Embankment and in Trafalgar Square. this scene sho.wS an immense knowledge of low life,

its miseries, humours and talk, but has unfortunately been written in a " stunt" Joyce fashion which utterly ruins the effect.

But the president of. the immortals had not finished with

Dorothy. She is rescued, but only as her fantastic, scandal- terrified relatives can rescue. . And here Mr.-OrIvell's satirical facility has lured him away from his best manner to .the glib cruelties of caricature. It is not certain—and Mr. -Orwell seems uncertain on this point2Lthat Dorothy is a half-wit. Her training has been half-witted ; but Dorothy . One does not believe that she would not hive put up a more intelligent fight. Still, Mr. Orwell'i case is a sound one.

There is nothing conventional. about Unrest of. Their Time, a punning title indicating not political or spiritual 'struggle, but the metaphysical chaos which -seizes upon past; present and future, once Serialism is let loose among them. The chaos indeed proceeds from the metaphysics to the printing. Those passages of this solemb, difficult and original book which 'refer to a co-existent: past "are printed in red. The fact that it was necessary to'call.in the aid of the printer's ingenuity in -order 'to make the book intelligible is a serious criticism of it---Land More serious when the trick makes it even less intelligible.. Character according to Freud or Marx, Time according to Diume, are fundamental errors.

Still, though one feels a novelist is seriously mistaken, he can be mistaken. interestingly ; and this Miss Kirkham undoubtedly- is. Her scene is the Derbyshire of the bleak lead-mining country. The youngest son of wretchedly poor

farmers. passes his. childhood there, leaves, and 'by hard work makes money, and returns later to prospect. He has -come with his wife whom, owing to his inordinate love of his mother, he has ceased to love. The couple stay at a ruinous and isolated house on the hills and there -a kind of Dunne-ridden ghost story is enacted. The husband

hangs himself in the end, but the inner story of that hanging is not psychological but historical. He has relived an Eliza-

bethan life and past and present have coincided.

We abandon these cares .for the screaming, laughing, eter- nally talking Irish .novel of the fireside, wash-tub, and love- on-the-mountainy road variety. The House I Made is a hullabaloo of a bpok, very little to it when examineji closely, but full Of am-using, ear.-splittink dialogue. The humours

'and disasters which gather round a delayed marriage are the subject.

" ' And there we "were,' she continued, musingly, 'myself and Sarah, on Monkstown Pier,-walking towards the end, and after us came the two marines, and coughed. Sarah pinched me—we were linked arms—and the two of us coughed, and Sarah said, giving a dake back over a shoulder, " colds are catching." The marines coughed again, and we coughed again--!` Hem, hem "—very grand, like that. By this time we were at the end of the pier, and when we turned round, there they were in front of us, all smiles, like a cat in a tripe shop. Of course, I needn't tell you, we stood ; and Sarah began hopping around on her toes and laughing very grand—haw, haw, haw just like that.' Rosie sighed and shook her head violently. `'Poor' Sarah, she was the divil :for being grand, and then—God help us all !—to marry poor equinty-eyed Jim Coveney, with his pimpledy face, at the latter end !' " And so it goes on. Eloquence has gone from England. Ivan Bunin's soothing, melancholy Tchecovian short

stories vary very much: in quality.. Those lieutenants in the Caucasus, those meetings and partings on the river steamers,

those letters from a lonely woman, how familiar they all are :

" Within another fifteen or twenty years; it is likely'that there will be neither you nor me in this world. Until we meet in the next ! Who knows for certain that it doesn't exist ? "

And we will never, never go to MOscow The book contains at least two good stories, " A Simple Peasant " and " On the Great Road."