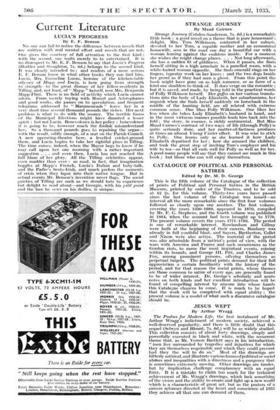 No one can fail to notice the difference between novels that arc written with-real mental effort and novels that are not. One gives the courtesy of full attention to the first kind : with the second, one waits merely to be entertained. It is no disrespect to Mr. E. F. Benson to say that Lucia's Progress (Hodder and Stoughton, 7s. 6d.) belongs to the second kind. It was clearly intended to ; and readers of a More serious E. F. Benson know in what- other books they can find him. Lucia, Mrs. Emmeline Lucas, heroine of the kitchen-table odyssey of Mapp and Lucia, is here going from strength to strength—to the great dismay of her- fellow-residents in 'filling, and, not least, of " Mapp "-herself, now Mrs. Benjamin Mapp-Flint. There is no field of actiiity which Lucia cannot adorn. From merely toying with Mozart and Aristophanes and good works, she passes on to speculation, and frequent telegrams addressed to ".blanunoncash " leave her in a very short time several thousand pounds the richer. Her next problem is what to do with the money. The terrible fiasco of the Municipal Elections might. have daunted a lesser spirit : but not Lucia. Benevolence is her policy ; benevolence it is going to be, however much the .foolish misunderstand her, So a thousand pounds goes to repairing the organ— with the result, oddly enough, of a seat on the 'Parish-Council. A new operating-theatre here, a levelled cricket-ground there, and Lucia begins to take her rightful place in Tilling. The time comes, indeed, when the Mayor begs to know if he may call upon her one morning with a rather important suggestion . . . and. even then, Lucia has not reached the full blaze of her glory. All the Tilling celebrities appear, even madder than ever : so mad, in fact, that imagination boggles at Mapp's French, Lucia's Italian and baby-talk, and the Padre's Scots-Irish, and much prefers the moments of crisis when they lapse into their native tongue. But in actual events Mr. Benson's invention never flags. The social gaieties of Tilling are such as we should hate to experience but delight to read about—and Georgie, with his petit point and the lace he sews on his doilies, is unique.