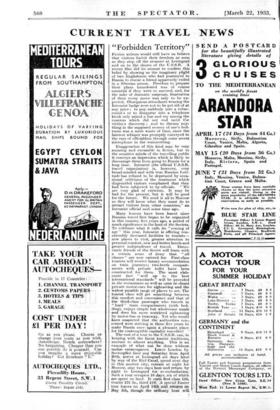 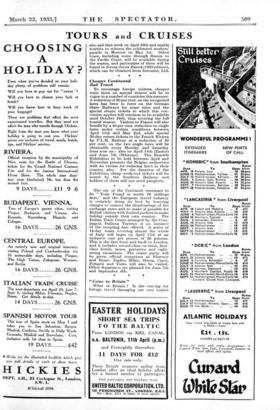 Fiction writers would still hae us believe that visitors forfeit their freedom as _soon as they step off the steamer at Leningrad and on to the shores of the U.S.S.R. A recent film did. its utmost- to confirm this belief by showing us the imaginary plight of two Englishmen who had journeyed to

Russia to rescue a friend ap ntly exiled in a Siberian prison. on to prepare

their plans unmolested was of course essential if they were to succeed, and, for the sake of dramatic` suspense, frustration of their every move was only to be ex- pected. Obsequious attendants wearing the Intourist badge were not to be got rid of at any price ; to pop suddenly into a tobac- conist's or to disappear into a telephone kiosk only raised a hue and cry among the couriers which did not end until the victim's discovery ; and to discuss •any% thing in the supposed secrecy of one's bed- room was a mere waste of time, since the faintest whisper was promptly conveyed to the ears of officialdom through some secret microphone in the wainscotting.

Exaggeration of this kind may. be very amusing and excusable in fiction, but to the sensitive minds of the travelling public it conveys an impression which is likely to discourage them from going to Russia fora long time. Intourist (the official U.S.S.R. travel organizaton) is, however, :very broad-minded and with true Russian forti- tude has refused to be depressed by occa- sional criticisms of the treatment which disgruntled visitors complained that they had been subjected to by officials. " We are very glad of criticism. It may be bad for the present, but it will be good for the future. We send, it all to Moscow so they will know what they must do to attract visitors from other countries," an Intourist official said some time ago.

Many lessons have been learnt since Russian travel first began to be organized in this country five years ago, a period of much significance in the land of the Soviets. To celebrate what it calls its " coming of age " this year, Intourist is offering con- siderably increased facilities to tourists— new places to visit, greater attention to personal comfort, new and better hotels and greater independence of travel. Demo- cratic friends of the Soviet will learn with a certain sense of irony that ", all classes " are now catered for. First-class tourists will receive luxury accommodation on train journeys; two-berth compart- ments with private toilet have been constructed for them. The most elab- orate fare " well up to the best international standards " will be provided in the restaurants as well as open or closed private motor-cars for sightseeing and the widest possible range of places to see. The tourist class will get something between this comfort and convenience and that of the third-class passenger who travels in " hard " train compartments (with bed, ding), enjoys simple but wholesome meals and does his more restricted sightseeing by motor-bus or tramway. Yet who would have suspected that the authorities con-r cerned were striving in those five years to make Russia once again a pleasant place for the contemptible capitalist traveller? , The cost of a tour to the U.S.S.R. can, in keeping with the finest .tourist traditions amount to almost anything. This is an example of what can be done without. undue extravagance. Leave London by Sovtorgflot liner any Saturday from April 20th, arrive at Leningrad six days later- by way of the Kiel Canal, spend next day in this ancient city, entrain at night for Moscow, stay two days here and return by night to Leningrad for re-embarkation. Such a tour occupies 16 days, six of which are spent on land. It costs first class £45, tourist' £31 5s., third £19. A special Easter tour leaves on April 18th and returns on May 5th, though the ordinary boat will

also sail that week on April 20th and enable tourists to witness the celebrated workers' parade in Moscow on May 1st. Other tours, including some through Russia to the Pacific Coast, will be available during the season, and particulars of them will bo found in Seeing Soviet Russia (1935 edition), which can be obtained from Intourist, Ltd.