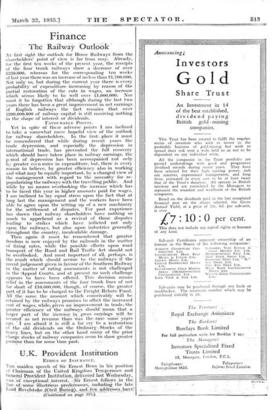 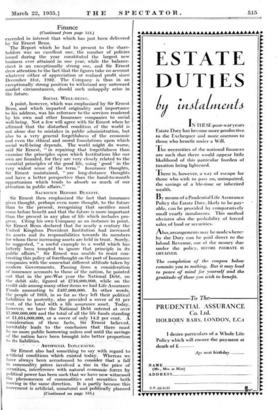 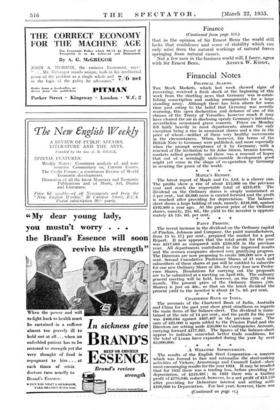 THE maiden speech of Sir Ernest Benn in his position of Chairman of the United Kingdom Temperance and General Provident Institution, delivered last Wednesday, was of exceptional. -interest. -!Sir Ernest folloIlis in the line of-some illustrious predeeessors, including the late Lord Revelstoke (qecil Barink) and. few addresses haye (Continued on page b15.)

(Continued from page 513.) exceeded in interest that which has just been delivered by Sir Ernest Benn.

The Report which he had to present to the share- holders was an excellent one, the number of policies issued during the year constituted the largest new business ever attained in one year, while the balance- sheet is an exceptionally strong one, and Sir Ernest drew attention to the fact that the figures take no account whatever either of appreciation or realized profit since December 81st, 1932. The Company is thus in an exceptionally strong position to withstand any untoward market circumstances, should such unhappily arise in the future.

A point, however, which was emphasized by Sir Ernest Benn, and which imparted originality and importance to his address, was his reference to the services rendered by his own and other Insurance companies to social well-being. Not a few will agree with Sir Ernest when he affirmed that the disturbed condition of the world is not alone due to mistakes in public administration, but also to a very general forgetfuhiess of the economic and even the ethical and moral foundations upon which social well-being depends. The world might do worse, said Sir Ernest, " in repairing that forgetfulness than examine the principles upon which Institutions like our own are founded, for they are very closely related to the essential principles of the good life, using ' good ' in the very widest sense of the term." Insurance thoughts, Sir Ernest maintained, " are long-distance thoughts and have a better perspective than the hand-to-mouth opportunism which tends to absorb so much of our attention in public affairs."

Sir Ernest then emphasized the fact that insurance gives thought, perhaps even more thought, to the future than to the present, recognizing that sacrifice must come before benefit and that the future is more important than the present in any plan of life which includes pro- gress. Citing his own Company as an instance in point, Sir Ernest Benn declared that for nearly a century the United Kingdom Provident Institution had increased its assets and its responsibilities towards its members for whom these increasing assets are held in trust. Surely, he suggested, " a useful example to a world which has latterly been tempted to ignore that principle in its public affairs." Sir Ernest was unable to resist con- trasting this policy of forethought on the part of Insurance companies with the somewhat different attitude taken by modern Governments. Passing from a consideration of insurance accounts to those of the nation, he pointed out that in the pre-War year the National Debt, on the debit side, figured at £716,000,000, while on the credit side among many other items we had Life Assurance Funds amounting to £437,000,000. In other words, the people of 1913, in so far as they left their political liabilities to posterity, also provided a cover of 61 per cent. of the total with a life assurance asset. Today, however, we have the National Debt entered at over £7,000,000,000 and the total of all the life funds standing at £1,054,000,000, or a cover of only 14.2 per cent. A consideration of these facts, Sir Ernest believed, inevitably leads to the conclusion that there must he no more public borrowing unless and until the savings of the nation have been brought into better proportion to its liabilities.

Sir Ernest also had something to say with regard to a-tificial conditions which existed today. Whereas we have always been accustomed to consider that a fall in commodity prices involved a rise in the price of securities, interference with natural economic forces by political power has been such that we have now witnessed the phenomenon of commodities and securities both moving in the- same direction. it is partly because this movement is artificial, unnatural and politically planned (Continued on page 516.) Finance (Continued from page 515.)

that in the opinion of Sir Ernest Benn the world still lacks that confidence and sense of stability which can only arise from the natural workings of natural forces springing from natural causes.

Not a few men in the business world will, I fancy, agree