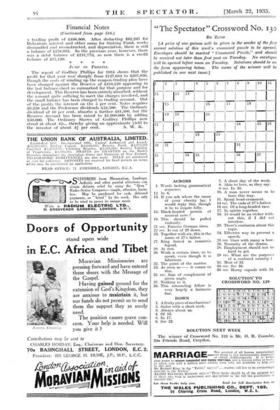 The report of Godfrey Phillips for 1934 shows that the profit for that year rose sharply from £127,684 to £207,836, though the costs of winding up the coupon-trading plan have been charged against the Reserve of £134,220 appearing in the last balance-sheet as earmarked for that purpose and for development. This Reserve has been entirely absorbed, without the amount quite sufficing to meet the charges involved, and the small balance has been charged to trading account. Out of the profits the interest on the 5 per cent. Notes requires £6,250 and the Preference dividends £52,500. The Ordinary dividend of 10 per cent. absorbs a further £81,300, but the Reserve Account has been raised to £1,000,000 by adding £50,000. The Ordinary Shares of Godfrey Phillips now stand at about 42s., thereby giving an approximate yield to the investor of about 41 per cent. A. W. K.