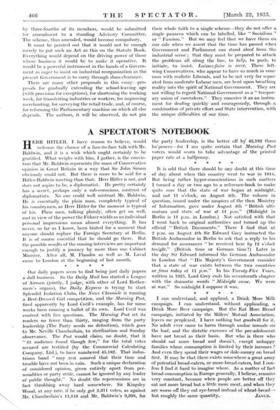 a dull business. So the Daily Mail has started a League of Airmen (jointly, I judge, with other of ,Lord R,other- mere's organs), the Daily Express is trying to start Splendid Isolation Clubs, the News Chronicle is running a Best-Dressed Girl competition, and the Morning Post, fired apparently by Lord Cecil's example, has for some weeks been running a ballot of its own. Lord Cecil was content with five questions.. The Morning Post set its readers no fewer than thirty, ranging from the party leadership (The Party needs no definition), which goes -to Mr. Neville Chamberlain, to sterilization- and Sunday -observance. The Post would claim, no doubt, that it " fit audience found though few," for the total votes secured are testified (by the Commercial Calculating Company, Ltd.), to have numbered 45,182. That indus- trious band " may rest assured that their time and trouble have not been in vain. Such a unique declaration of considered opinion, given entirely apart from per- sonalities_or party strife, cannot be ignored by any leader of public thought." No doubt the repercussions are in fact throbbing aivay hard . somewhere. Sir Kingsley Wood, at any rate, if he only got 2,311 votes, as against .Mr. Chamberlain's. 11,343 and Mr. Baldwin's 9,398, for the party leadership, is the better off b? 45,182 three ha'pences—for I am quite certain that Morning Post voters would scorn to take advantage of the printed paper rate at a halfpenny.