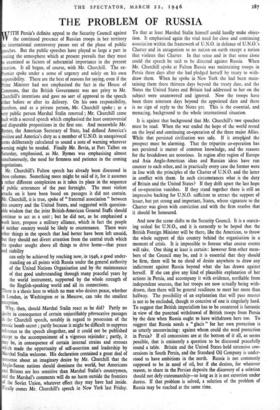 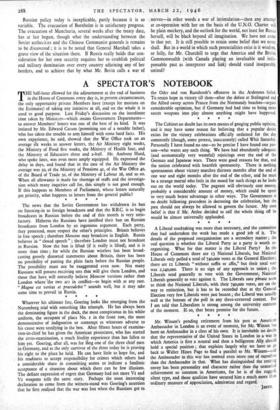 THE PROBLEM OF RUSSIA

ITH Persia's definite appeal to the Security Council against the continued presence of Russian troops in her territory e international controversy passes out of the phase of public peeches. But the public speeches have played so large a part in reating the atmosphere which at present prevails that they must examined as factors of substantial importance in the present ituation. It all began, of course, with Mr. Churchill. The ex- 'remier spoke under a sense of urgency and solely on his own esponsibility. There are the best of reasons for saying, even if the 'rime Minister had not emphasised the fact in the House of mmons, that the British Government was not privy to Mr.

urchill's intentions and gave no sort of approval to the speech ither before or after its delivery. On his own responsibility, herefore, and as a private person, Mr. Churchill spoke ; as a try public person Marshal Stalin retorted ; Mr. Churchill came ack with a second speech which emphasised the least controversial nd disputable propositions in the first one. And meanwhile Mr.

yrnes, the American Secretary of State, had defined America's sition and America's duty as a member of U.N.O. in unequivocal erms deliberately calculated to sound a note of warning wherever arning might be needed. Finally Mr. Bevin, at Port Talbot on aturday, emphasised, as Mr. Byrnes was emphasising almost imultaneously, the need for firmness and patience in the coming egotiations.

Mr. Churchill's Fulton speech has already been discussed in hese columns. Something more might be said of it, for it assumes rather different complexion as it takes its place in the sequence f public utterances of the past fortnight. The most violent attacks on it have been based on passages it did not contain. r. Churchill, it is true, spoke of " fraternal association " between is country and the United States, and suggested with question- able wisdom that the joint British-American General Staffs should ontinue to act as a unit ; but he did not, as he emphasised a eek later, propose a military alliance, which in fact the people f neither country would be likely to countenance. There were ether things in the speech that had better have been left unsaid, ut they should not divert attention from the central truth which he speaker sought above all things to drive home—that peace nd stability can only be achieved by reaching now, in 1946, a good under- standing on all points with Russia under the general authority of the United Nations Organisation and by the maintenance of that good understanding through many peaceful years by the world instrument, supported by the whole strength of the English-speaking world and all its connections.

here is a thesis here to which no man who desires peace, whether 11 London, in Washington or in Moscow, can take the smallest xception.

Why, then, should Marshal Stalin react as he did? Partly no doubt in consequence of certain unjustifiably ptovocative passages in the Churchill speech, notably in regard to possession of the atomic bomb secret ; partly because it might be difficult to suppress reference to the speech altogether, and it could not be published except to the accompaniment of a vigorous rejoinder ; partly, it may be, in consequence of certain internal strains and stresses which made the opportunity of self-assertion and leadership by Marshal Stalin welcome. His declaration contained a great deal of nonsense about an imaginary desire by Mr. Churchill that the Anglo-Saxon nations should dominate the world, but Americans and Britons are less sensitive than Marshal Stalin's countrymen, and the Marshal's comments will do no harm outside the frontiers of the Soviet Union, whatever effect they may have had inside. Finally comes Mr. Churchill's speech in New York last Friday. To that at least Marshal Stalin himself could hardly make objec- tion. It emphasised again the vital need for close and continuing association within the framework of U.N.O. in defence of U.N.O.'s Charter and in antagonism to no nation on earth except a nation that violates that Charter. In that sense and in that sense alone could the speech be said to be directed against Russia. When Mr. Churchill spoke at Fulton Russia was maintaining troops in Persia three days after she had pledged herself by treaty to with- draw them. When he spoke in New York she had been main- taining them there thirteen days beyond the treaty date, and the Notes the United States and Britain had addressed to her on the subject were unanswered and ignored. Now the troops have been there nineteen days beyond the appointed date and there is no sign of reply to the Notes yet. This is the essential, and menacing, background to the whole international situation.

It is against that background that Mr. Churchill's two speeches must be read. When the war ended the hope of the world rested on the loyal and continuing co-operation of the three major Allies. While that persisted civilisation was safe. If it atrophied the prospect must be alarming. That the tripartite co-operation has not persisted is matter of common knowledge, and the reasons for the breakdown are notorious. In region after region of Europe and Asia Anglo-American ideas and Russian ideas have run counter to each other, and in practically every case the former were in line with the principles of the Charter of U.N.O. and the latter in conflict with them. In such circumstances what is the duty of Britain and the United States? If they drift apart the last hope of co-operation vanishes. If they stand together there is still an impressive backing for U.N.O. sufficient to attract the support of lesser, but yet strong and important, States, whose signature to the Charter was given with conviction and with the firm resolve that it should be honoured.

And now the scene shifts to the Security Council. It is a search- ing ordeal for U.N.O., and it is earnestly to be hoped that the British Foreign Minister will be there, like the American, to throw the whole support of this country behind the organisation in a moment of crisis. It is impossible to foresee what course events will take. One thing at least is certain: however firm other mem- bers of the Council may be, and it is essential that they should be firm, there will be no shred of desire anywhere to draw any indictment against Russia beyond what she has drawn against herself. If she can give any kind of plausible explanation of her actions in Persia, and accompany it with evidence, verifiable from independent sources, that her troops are now actually being with- drawn, then there will be general readiness to meet her more than halfway. The possibility of an explanation that will pass muster is not to be excluded, though to conceive of one is singularly hard. To suggest that British imperialism has to be countered is fantastic in view of the punctual withdrawal of British troops from Persia by the date when Russia ought to have withdrawn hers too. To suggest that Russia needs a " glacis " for her own protection is as utterly unconvincing: against whom could she need protection in Persia? If oil concessions are at the bottom of it all, as seems possible, that is eminently a question to be discussed peacefully round a table. Britain and the United States hold extensive con- cessions in South Persia, and the Standard Oil Company is under- stood to have ambitions in the north. Russia is not commonly supposed to be in need of oil, but if she desires, for whatever reason, to share in the Persian deposits the discovery of a solation should not defy statesmanship—so long as it is not extortion under duress. If that problem is solved, a solution of the problem of Russia may be reached at the same time. Russian policy today is inexplicable, partly because it is so variable. The evacuation of Bornholm is in satisfactory progress. The evacuation of Manchuria, several weeks after the treaty date, has at last begun, though what the understanding between the Soviet authorities and the Chinese Communist generals is remains to be discovered ; it is to be noted that General Marshall takes a grave view of the situation there. If Russia really holds that con- sideration for her own security requires her to establish political and military domination over every country adjoining any of her borders, and to achieve that by what Mr. Bevin calls a war of nerves—in other words a war of intimidation—then any attempt at co-operation with her on the basis of the U.N.O. Charter will be plain mockery, and the outlook for the world, not least for Russia herself, will be black beyond all imagination. We have not come to that yet. It is still possible to retain some belief that we never shall. But in a world in which such potentialities exist is it wisdom, or folly, for Mr. Churchill to urge that America and the British Commonwealth (with Canada playing an invaluable and indis- pensable past as interpreter and link) should stand inseparably united?