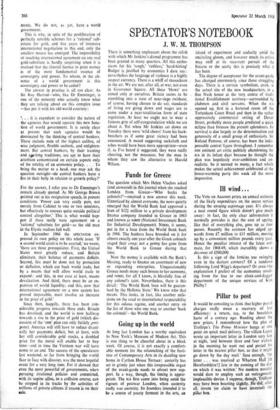 J. W. M. THOMPSON There is something unpleasant about the relish with which Mr Jenkins's dismal programme has been greeted in many quarters. All this enthu- siasm for his 'tough,' ruthless,"hard-hitting' Budget is justified by economics I dare say: nevertheless the language of violence is a highly suspect currency. There is a whiff of masochism in the air. We are not, after all, at war, not even in Grosvenor Square. All these 'blows' are aimed only at ourselves. Britain seems, to be stumbling into a state of near-siege (without, of course, having chosen to do so);. standards of living are going down and wages are to come under a near-totalitarian form of state regulation. At least we ought not to wear a fatuous grin of self-congratulation while we are about it. Yet when Mr Jenkins sat down on Tuesday there were 'wild cheers' from his back- benchers as if some great victory had been announced. A mood suggesting sackcloth and ashes would have been more appropriate—even if, as I've heard it suggested, they were really cheering, not the measures, but the man in whom they saw the ,alternative to Harold Wilson.

The question which Mrs Helen Vlachos asked (and answered) in this journal when she reached London from Greece--Who backs the colonels?'—received a new answer this week. Unnoticed by almost everyone, the news quietly emerged that the World Bank had approved a loan of $121 million to a private development finance company founded in Greece in 1963 and known as NMI) (National Investment Bank for Industrial Development). NIBID, it seems, put in for a loan from the World Bank back in 1966. The bankers have brooded on it for almost exactly one year after the Greek colonels staged their coup; not a penny has gone from the World Bank to Greece during that time.

Now the money is available with the Bank's blessing, ready to finance an assortment of new or expanding enterprises. Unquestionably Greece needs many such boosts to her economy, and NIBID, for all I know, is blissfully free of any colonel's taint. Nevertheless, there is this detail: 'The World Bank loan will be guaran- teed by the Hellenic State.' We know who that

means. This looks, in fact, like another mile- stone on the road to international respectability for this odious regime, and another entry on the list of those who one way or another 'back the colonels'—the World Bank.

Going up in the world

At long last London has a worthy equivalent to New York's Museum of Modern Art. This is one thing to be cheerful about in a bleak week. Of course, it is not exactly a comfort- able moment for the relaunching of the Insti- tute of Contemporary Arts in its dazzling new home in Carlton House Terrace: austerity has set in grimly just when this irrepressible organ of the avant-garde needs to attract new sup- port. In a way, though, the timing is appro- priate. The IC.A first came into being amid the rigours of postwar London, when austerity really was austerity. Its founders intended it to be a source of yeasty ferment in the arts, an

island of experiment and audacity amid the encircling gloom, and however much its critics may sniff ..at its recurrent pursuit of the bizarre or the scatty this is precisely what it has been.

The degree of acceptance for the avant-garde has changed enormously since those struggling days. There is a certain symbolism, even, in the actual site of the new headquarters, in a fine Nash house at the very centre of tradi- tional Establishment territory—surrounded by clubmen and civil servants. When the ICA opened up, first in a battered room off the Tottenham Court Road and then in the rather oppressively commercial setting, of Dover Street, probably more people predicted a .quick eclipse than foresaw the present splendours. Its survival is due largely to the determination and generosity of a small group of enthusiasts. Sir Roland Penrose, of course, has been the indis- pensable central figure throughout. I remember one eminent art critic publicly abandoning the ICA in its infant days because he thought the

plan was hopelessly over-ambitious and un- realistic. So it seemed to many, a fact which makes the actual achievement celebrated at the house-warming party this week all the more impressive.

The Vote on Account prints an annual estimate of the likely expenditure on the secret service during the ensuing ,espionage year. It's always a neat round figure which doesn't give much away : in fact, the only clear information it normally provides is that the cost of spying, like that of everything else, goes up as time passes. Recently the estimate has edged , up- wards from El million to fl 1 million, moving up by a convenient million pounds every year. Hence the peculiar interest of the latest esti- mate, for 1968-69, which incredibly shows a decrease of 000,0014.

Is this a sign of the Jenkins axe swinging even in the darkest corners? Of a rundown following Lord Wigg's departure? Or even (the explanation I prefer) of the economies result- ing from the loss to our cloak-and-dagger department of the unique services of Kim Philby?

It would be consoling to think that higher postal charges really mean a recovery of lost efficiency : a return, say, to the breathless haste of a century ago. Reading about the new prices, I remembered how the plot of Trollope's The Prime Minister hangs at one point on quick mail delivery. The villain Lopez wrote an important letter in London very late at night, 'and between three and four -o'clock in the morning he went out and posted his letter in the nearest pillar box, so that it might go down by the day mail.' Sure enough, 'the letter . . . was received at Wharton Hall [in Herefordshire] late in the evening of the day on which it was written.' No modern novelist would dare to employ such an outrageous!), implausible device. I suppose, though, Trollope may have been boasting slightly. He did, after all; invent (or claim to have invented) the pillar box.