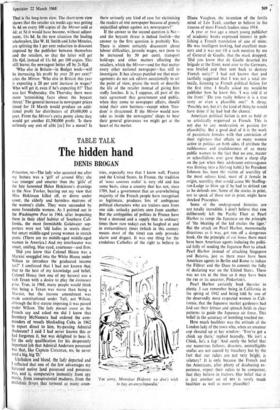 Princeton, NI—The lady who accosted me after my lecture was a 'girl' of around fifty; she was younger and smarter than the 'girls' of the late lamented Helen Hokinson's drawings in the New Yorker, bearing out my view that Miss Hokinson killed off, or drove under cover, the elderly and harmless matrons of the women's clubs. They were succeeded by more formidable women. As I pointed out in the Washington Post in 1964, after inspecting them in their chief habitat of Southern Cali- fornia, the most formidable Goldwater sup- porters were not 'old ladies in tennis shoes' but smart middle-aged young women in stretch pants: (There are no middle-aged middle-aged women in America.) And my interlocutor was smart, smiling, blue eyed, courteous—and firm.

'Did you know that Colonel House was a Marxist smuggled into the White House under Wilson to introduce the graduated income tax?' I confessed that I had not known that, that to the best of my knowledge and belief, Colonel House (not one of my heroes) was a rich Texan with a desire to play the eminence grise. True, in 1968, many people would think that being a Texan was worse than being a Marxist, but the income amendment was made constitutional under Taft, not Wilson, although the first statute imposing it was passed under Wilson. The lady passait outre as the French say and asked me did I know that Secretary McNamara had ordered the com- manders of vessels blockading Cuba in 1962 to report direct to him, by-passing Admiral Anderson? I said I had never known this or had forgotten it, but was delighted to hear it, for the only qualification for his desperately important job that Admiral Anderson possessed was that, like Captain Corcoran, RN, he never used a big, big 'D.'

Unshaken and bland, the lady departed and I reflected that one of the few advantages my harassed native land possessed and possesses Was, and is, comparative immunity from spy mania, from conspiratorial madness, from the credulous fevers that torment so many coun-

tries, especially two that I know well, France and the United States, In France, the tradition of 'nous sommes trahis' is very old and has some basis, since a country that has not, since 1789, had a government that an overwhelming majority of the French people have recognised as legitimate, produces lots of ambiguous political characters who are traitors seen from one side, unlucky patriots seen from another. But the- ambiguities of politics in France have bred a demand and a supply that in ordinary times (how rare today) can be laughed at and in extraordinary times (which in this century means most of the time) can only provoke alarm and disgust. It was one thing for the credulous Catholics of the right to believe in sorry. Monsieur Diderot,- we don't wish to buy an .encyclopaedia.' Diana Vaughan, the invention of the fertile mind of Leo Taxil, another to believe in the treason of most French leaders since 1914.

A year or two ago a smart young publisher of academic books expressed interest in pub- lishing a French translation of one of mine. He was intelligent looking, had excellent man- ners and it was not till a rash mention by me of General de Gaulle, that the mask dropped. 'Did you know that de Gaulle deserted bis brigade at the front, went over to the Germans, was briefed and then sent back to destroy French unity?' I had not known that and tactfully suggested that I was not a total im- becile, listening to French political fiction for the first time. I finally asked my would-be publisher how he knew this. 'I was told it at the front.' po you really believe it is a true story or even a plausible one?' A shrug. 'Possibly not, but it's the kind of thing he would have done if he had had the chance.'

American political fiction is not so bold or so artistically organised as French. This is not due to any moderation or passion for plausibility. But a good deal of it is the work of passionate females with that conviction of their rightness that affects so many women active in politics on both sides. (I attribute the ruthlessness and credulousness of so many public women to the fact that no one, master or schoolfellow, ever gave them a sharp clip on the jaw when their adolescent extravagance was firming into a lifelong habit.) So President Johnson has been the victim of scurrility of the most odious kind, most of it female in origin, scurrility that would cause Mr Skeffing- ton-Lodge to blow up if he had to defend Lai as he defends HW. Some of the stories in print, not to speak of those not in print, might have shocked Procopius.

Some of the underground histories are not totally incredible. I don't believe that FDR deliberately left the Pacific Fleet at Pearl Harbor to tempt the Japanese on the principle of 'the bleating of the kid excites the tiger.' But the attack on Pearl Harbor, momentarily disastrous as it was, got FDR off a dangerous hook. On the principle of cui bono, there must have been American agents inducing the politi- cal folly of sending the Japanese fleet to attack Pearl Harbor instead of attacking Singapore and Batavia, just as there must have been American agents in Berlin and Rome to induce the Filhrer and the Duce to commit the folly of declaring war on the United States. There was no cm at the time so it may have been the FBI or its ancestor, Pinkerton's.

Pearl Harbor certainly bred theories in plenty. I can remember being in California in the spring of 1942 and being told by one of the deservedly most respected women in Cali- fornia, that the Japanese market gardeners had laid out their lettuce and spinach fields in clear patterns to guide the Japanese air force. This belief in the accuracy of bombing touched me.

How much healthier was the attitude of the London lady of the town who, when an amateur cop shouted up at her window: 'You've got a chink up there,' replied heatedly, 'He isn't a Chink, he's a Jap.' And surely the belief that our numerous failures, disasters, unintelligible snafus are not caused by treachery but by the fact that our rulers are not very bright, is salutary? It is only because the French and the Americans, after plenty of disabusing ex- perience, expect their rulers to be competent, that they believe in traitors. Our belief that it is just another set of BFS is surely much healthier as well as more plausible?