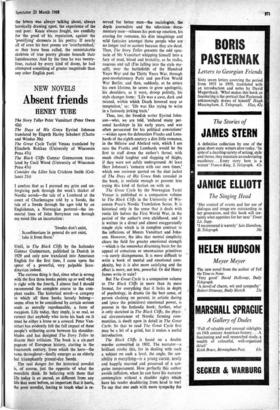 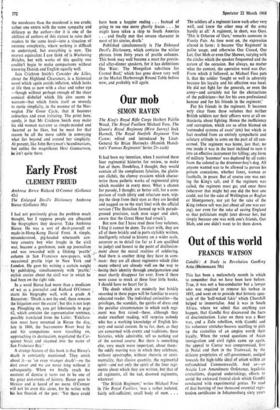 I confess that as I pursued my grim and un- forgiving path through the week's thicket of Nordic novels—the tale of a Lombard at the court of Charlemagne told by a Swede, the tale of a Swede through the ages told by an Englishman, a Norwegian pastoral—the im- mortal lines of John Berryman ran through my mind like an incantation: 'Swedes don't exist, Scandinavians in general do not exist, take it from there.'

Until, in The Black Cliffs by the Icelander Gunnar Gunnarsson, published in Danish in 1929 and only now translated into American English for the first time, I came upon the spoor of a powerful, very palpable Scan- dinavian indeed.

The curious thing is that, since what is wrong with the first three books points up so well what is right with the fourth, I almost feel I should recommend the complete course to the corn- pleat reader. The historical novel—a category to which all these books loosely belong— seems often to be considered by certain serious souls as morally reprehensible, a form of escapism. Life today, they imply, is so real, so earnest that anybody who turns his back on it must be either a louse or a coward. Peter Van- sittart has evidently felt the full impact of these people's withering scorn between his shoulder- blades and has designed The Story Teller to disarm their criticism. The book is a six-part pageant of European history, starting in the fourteenth century, from which the hero—the same throughout—finally emerges as an elderly but triumphantly present-day Swede.

The real danger for the historical novelist is, of course, just the opposite of what the moralists think. In believing with them that life today is so sacred, so different from any life that went before, so important that it hurts, the poor novelist, fearing to touch what is re- served for better men—the sociologists, the depth journalists and the television docu- mentary men—releases his pent-up emotion, his craving for romance, his dim imaginings and wild fantasies amongst those people who are no longer real or earnest because they are dead. Thus, The Story Teller presents the odd spec- tacle of Mr Vansittart whipping himself into a fury of mud, blood and brutality, as he stalks, raucous and tall (I'm falling into the style my- self), over the battlefields of the Hundred Years War and the Thirty Years War, through post-revolutionary Paris and pre-First World War Berlin; and then, suddenly, as he enters his own lifetime, he seems to grow apologetic, his shoulders, as it were, droop politely, his style changes from: 'Life was a cave, dark and twisted, within which Death hovered easy as temptation,' to: 'life was like trying to write in a furiously jerking train.'

Thus, too, the Swedish writer Eyvind John- son—who, we are told, 'endured many per- sonal hardships in his early years, and was often persecuted for his political convictions' —wishes upon the defenceless Franks and Lom- bards of the eighth century a dim little romance, in the Heloise and Abelard vein, which I am sure the Franks and Lombards would be the first to stuff down the author's throat, with much ribald laughter and slapping of thighs, if they were not safely underground. At least Herr Johnson's 'concern with our own times,' which one reviewer quoted on the dust jacket of The Days of His Grace finds revealed in the book, is realistic enough to prevent him trying this kind of fustian on with us.

The Great Cycle by the Norwegian Tarjei Vesaas is published as a companion volume to The Black Cliffs in the University of Wis- consin Press's Nordic Translation Series. It is historical only in the sense that it deals with rustic life before the First Work! War, in the period of the author's own childhood, and it is written in a direct and almost exaggeratedly simple style which is in complete contrast to the inflations of Messrs Vansittart and John- son. However, the idea that mental simplicity clears the field for greater emotional strength —which is the somewhat disarming basis for the appeal of conscious or unconscious primitives —is surely disingenuous. It is more difficult to write a book of mental and emotional com- plexity, but it is also more satisfying and the effect is more, not less, powerful. Or did Henry James write in vain?

But The Great Cycle is a companion volume to The Black Cliffs in more than its mere format, for everything that it lacks in depth of psychology, in drama (in the best sense, of person clashing on person), in artistic daring and (pace the primitives) emotional power, is present in the Icelandic book; further, what is only sketched in The Black Cliffs, the physi- cal circumstances of Nordic farming com- munities, is dwelt upon in detail in The Great Cycle. So that to read The Great Cycle first may be a bit of a grind, but it makes a useful introduction.

The Black Cliffs is based on a double murder committed in 1802. The narrator—a brilliant stroke this, for in dealing with such a subject on such a level, the angle, the sen- sibility is everything—is a young curate, newly and happily married and possessed of a san- guine temperament. How perfectly this author avoids inflation, when he can have his narrator contemplate without a shudder sights which have his reader shuddering from head to toe! To say that one ends with more sympathy for the murderers than the murdered is too crude; rather one enters with the same sympathy and delicacy as the author—for it is one of the abilities of authors of this stature to raise their readers to the same level—into a situation of extreme complexity, where nothing is difficult to understand, but everything is new. The nearest equivalent I can think of is Wuthering Heights, but with works of this quality one couldn't begin to make comparisons without knowing Danish and English equally well.

lain Crichton Smith's Consider the Lilies, about the Highland Clearances, is a historical novel which again avoids inflation, which looks at life then as now with a clear and sober eye —though without perhaps enough of the sheer comical disbelief which life also seems to warrant—but which limits itself so severely to rustic simplicity, in the manner of the Nor- wegian The Great Cycle, that it becomes colourless and even irritating. The point here, surely, is that Mr Crichton Smith may make his old woman narrator as simple-minded and -hearted as he likes, but he must for that reason be all the more subtle in conveying what lies beyond and around her simplicity. At present, like John Berryman's Scandinavians, but unlike the magnificent Herr Gunnarsson, he isn't quite there.