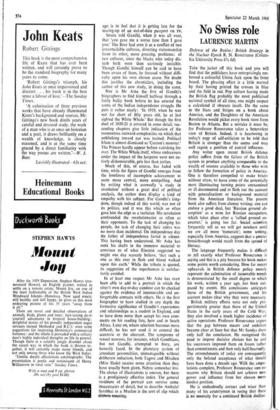 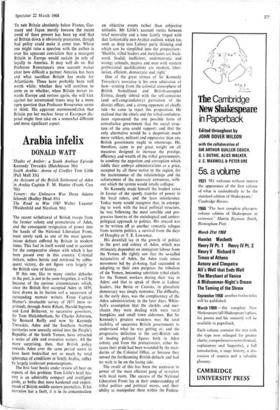 Take the jacket off this book and you will find that the publishers have enterprisingly em- bossed a colourful Union Jack upon the front board. The pleasing effect is a little marred by their having printed the crosses in blue and the field in red. Pop culture having made the British flag probably the most publicised national symbol of all time, one might suspect -a calculated if obscure insult. Do the same • to the Stars and Stripes on a book about America, and the Daughters of the American Revolution would picket every book store from Boston to Atlanta. But a mistake it must be, for Professor Rosecrance takes a benevolent view of Britain. Indeed, it is heartening in today's orgy of self-criticism to be told that Britain is stronger than she seems and may well regain a position of central influence.

Any writer upon recent British defence policy suffers from the failure of the British system to produce anything comparable to the wealth of sources available to those who wish to follow the formation of policy in America. One is therefore compelled to make bricks without straw, to leave some of the potentially most illuminating turning points unexamined or ill documented and to flesh out the account with generalisations or background material from the American literature. The present hook also suffers from clumsy writing; one can endure a good deal, but 'Russian ground ab- sorption' as a term for Russian occupation, which takes place after a 'rallied ground en- counter,' is going too far. Social scientists frequently tell us we will get nowhere .until we are all more 'numerate'; some writing, especially from America, suggests that a greater breakthrough would result from the spreati of literacy. The language frequently makes it dilficult to id u exactly what Professor Rosecrance is saying and this is a pity because his book makes some points worth considering. How far recent upheavals in British defence policy merely represent the culmination of inexorable *rends is demonstrated by the small degree to which his work, written a year ago, has been out- paced by events. His conclusions anticipate those of the British government, and his account makes clear why they were necessary.

British military efforts were not only pro- portionately greater than those of the United States in the early years of the Cold War; they also involved a much higher incidence of active operations. Professor Rosecrance argues that the gap between means and ambition became clear at Suez but that Mr Sandys drew only half the conclusion. He -recognised the geed to impose decisive choices but he and his successors imposed them on forces rather than commitments and then only half-heartedly. The retrenchments of today are consequently only the belated acceptance of what should have been done a decade ago. With the ampu- tations complete, Professor Rosecrance sees _no reasons why Britain should not achieve new power and influence from her chosen more modest position. He is undoubtedly correct and wiser than many of his countrymen in seeing that there is no necessity for a continued British decline. To rate Britain absolutely below France, Ger- many and Japan merely because the recent trend of these powers has been up and that of Britain down is obviously premature, though bad policy could make it come true. Where one might raise a question with the author is over his apparent conviction that a resurgent Britain in Europe would sustain its role of loyalty to America. It may well do so. But Professor Rosecrance's own account makes clear how difficult a partner America has been and what sacrifices Britain has made for Atlanticism. These have probably been well worth while; whether they will continue to seem so or whether, when Britain moves to- wards Europe and revives again, she will kick against her accustomed traces may be a more open question than Professor Rosecrance seems to think. His apparent recommendation that Britain put her nuclear force at European dis- posal might then take on a somewhat different and more significant aspect.