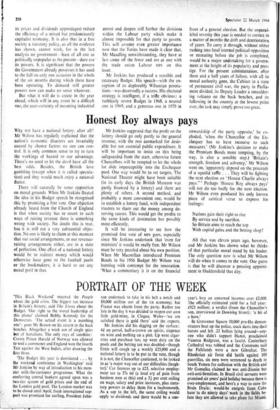 'This Black Weekend' moaned tbe People about the gold crisis. The biggest tax increase in Britain's history, said The Times about the Budget. 'Our right to the moral leadership of this planet' claimed Bobby Kennedy for the Democrats. 'The actual event is a numbing one': poor Mr Brown on his return to the back benches. Altogether a week not of single spies but of battalions. The only rays of sunshine: Crown Prince Harald of Norway was allowed to wed a commoner and England won the fourth Test against the West Indies, after drawing the first three.

'The Budget this year is dominated . . . by the weekend conference in Washington' said Mr Jenkins by way of introduction to his mon- ster milk-the-customer programme. What the conferring central bankers agreed upon was a two-tier system of gold prices and the end of the London gold pool. The London market was to be closed until April, fresh international sup- port was promised for sterling, President John-

son undertook to take in his belt a notch and $9,000 million out of the us economy; but France was absent from the party. Rather too late in the day it was decided to reopen our own little gold-mine, in Clogau, Wales—'we are satisfied there is gold there' said the experts.

Mr Jenkins did his digging on the surface: 4d on petrol, half-a-crown on spirits, sixpence on wine and nothing on a pint. Up went cigar- ettes and purchase tax; up went duty on the pools and the betting tax was doubled—though Ernie will cough up a weekly £25,000 and a national lottery is to be put to the vote, though it is not, the Chancellor cautioned, to be looked to as 'a major way out of our difficulties (laugh- ter): Car licences up to £25, selective employ- ment tax to 37s 6d (a loud cry of pain from business men at this) and a 3j per cent ceiling on wage, salary and price increases, plus statu- tory powers to delay them for a twelvemonth. As A sop to the left, the same ceiling would apply to dividends and there would be a one- year's levy on unearned incomes over £3,000. The officially estimated yield for a full year: £923 million; a verdict (from the Chancellor's son, interviewed in Downing Street): 'a bit of a bore.'

In Grosvenor Square 10,000 pro-Ho demon- strators beat up the police, stuck darts into their horses and left .22 bullets lying around—any- one who didn't support Hanoi, proclaimed Vanessa Redgrave, was a fascist. Canterbury Cathedral was robbed and the Commons said the Falldands were a new Gibraltar. The Rhodesian air force did battle against 100 guerrillas, six men were sentenced to death in South Yemen for collusion with the British and Mr Gomulka claimed he was anti-Zionist but anti-anti-Semitism. In Brazil civil servants were promised six years' paid holiday because there is over-employment, and here's a way to cure the Brain Drain: would-be emigres from Cuba have todo ninety days' work in the fields be- fore they are allowed to take plane for Miami.