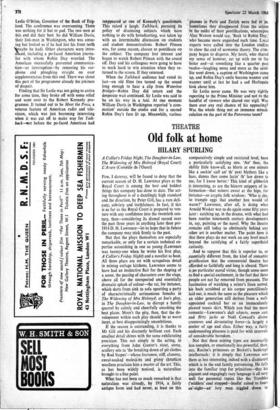 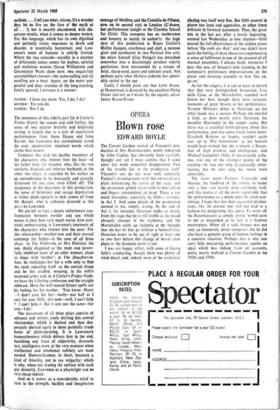 Few, I daresay, will be found to deny that the current season of D. H. Lawrence plays at the Royal Court is among the best and boldest things this company has done to date. The act- ing throughout is of a dazzlingly high standard and the direction, by Peter Gill, has a rare deli- cacy, sobriety and truthfulness. In fact, if this is as far as the Royal Court is prepared to ven- ture with any confidence into the twentieth cen- tury, then—considering its dismal record over the past three years in anything later than pre- 1914 D. H. Lawrence—let us hope that in future the company may stick firmly to the past.

Not that the plays themselves are especially remarkable, or only for a certain technical ex- pertise astonishing in one so young (Lawrence was twenty-one when he wrote his first play, A Collier's Friday Night) and a novelist to boot. All three plays are set with scrupulous detail in mining cottage kitchens. Lawrence seems to have had an instinctive flair for the shaping of a scene, the passing of characters over the stage, above all for the unexpected and essentially dramatic splash of colour—the rat, for instance, which darts from sink to sofa upsetting a party of characteristically acrimonious females in The Widowing of Mrs Holroyd; or Joe's ploy, in The Daughter-in-Law, to disrupt a family quarrel by calmly and cheerfully smashing the best plates. More's the pity, then, that the de- velopment within each play should be at worst inept, at best disappointingly unambitious.

If the season is outstanding, it is thanks to Mr Gill and his discreetly brilliant cast. Each smallest detail shines with the same exhilarating precision. This not simply in the acting, in everything from John Gunter's stout, stony, scullery sets to 'the breaking down of pit clothes by Rod Stopes'—whose fearsome, stiff, clammy, sweat-soaked moleskins and grimy shrunken woollens proclaim him a master of the art. This, as has been widely noticed, is naturalism brought to a fine point.

What has not been so much remarked is that naturalism was already, by 1914, a fairly antique form and had never, at least on this comparatively simple and restricted level, been a particularly satisfying one. 'An' thee, tha shiftly little know-all, as blorts at one minute like a suckin' calf an' th' next blethers like a bass, dunna thee come layin' th' law down to me, for I know better.' This kind of gibberish is interesting, as are the bizarre snippets of in- formation—that miners sweat at the hips, for instance—or cryptic folk wisdom : 'Who is she, to trample eggs that another hen would sit warm?' Lawrence, after all, is doing what Arnold Wesker was to do again some fifty years later: catching up, in the drama, with what had been routine nineteenth century developments in, say, painting or the novel. Why the theatre remains still today so obstinately behind any other art is another matter. The point here is that these plays do not work on any level much beyond the satisfying of a fairly superficial curiosity.

And to suppose that this is superior to, or essentially different from, the kind of romantic gratification that the commercial theatre has afforded so faithfully and long is absurd. There is no particular moral virtue, though some seem to find a special excitement, in the fact that these people are not far removed from peasants. The fascination of watching a miner's linen sorted, his back scrubbed or his corpse punctiliously laid out, is much the same as the pleasure which an older generation still derives from a well- appointed cocktail bar or an immaculately pleated tennis skirt. Which you find the more romantic—Lawrence's daft objects, mean cats and flirty jacks or Noel Coward's divine creatures and devastating bores—is largely a matter of age and class. Either way, a fairly undemanding pleasure is paid for with intervals of considerable boredom. •

Not that these mining types are necessarily less complex, or emotionally less powerful, than, say, Racine's princesses or Beckett's bankrupt intellectuals: it is simply that Lawrence sees them as less interesting, indeed with a disinterest which is in the end faintly patronising. He falls into the familiar trap for primitives—that his piquant and engagingly racy language is all very well for perennial topics like the Troubles Cwidders' coal stopped—leadin' raised to four- an'-eight----an' ivry man niggled down to nothink.... I tell you what, missus, it's a wonder they let as live on the face o' the earth at all . . but is smartly abandoned, with dis- astrous results, when it comes to deeper waters. For this language, which has its own dignified and patiently ironic responses to death and disaster, is essentially humorous; and Law- rence's sense of humour is strictly limited. Where the two coincide—notably in a number of deliciously comic scenes for jealous, spiteful and malicious women (Susan Williamson and Gwendolyn Watts shine here, two exquisitely accomplished clowns)—the name-calling and sly needling are a treat. Again. on the more pur- poseful and dour routines of the long-standing family quarrel, Lawrence is a master: FATHER: I have my share. Yes. I do, I do! MOTHER: Yes you do.

FATHER Yes I do.

The meanness of this elderly pair (in A Collier's Friday Night). the venom and cold futility, the sense of two natures brutally and helplessly Jarring, is largely due to a pair of superlative performances from Anne Dyson and John Barrett; but Lawrence has meticulously noted the sour, inexpressive impotent words which clothe their misery Compare this with his shabby treatment of the characters who interest him the least—of the father here, for instance who, like the two similarly despised and inferior husbands in the other two plays, is regarded by his author as an encumbrance to be brusquely and casually dismissed (in one case. even killed off). The poignancy of his departure in this production, the sense of bitterness and savage deprivation as father plods upstairs to bed, comes all from Mr Barrett, who is callously deserted at this point by Lawrence.

We are left to face a deeply unfortunate con- frontation between mother and son which makes it clear how very much worse, how posi- tively embarrassing, is Lawrence's treatment of the characters who interest him the most. For this relationship—mother/son and their mutual contempt for father—is the core of all three plays: in The Widowing of Mrs Holroyd, the son, thinly disguised as the inept and power- fully inhibited lover of an older woman, plans to elope with 'mother'; in The Daughter-in- Law, he exchanges her for a wife only to find the cycle repeating itself as the curtain drops and he lies cradled, weeping, in his wife's maternal arms; and, in A Collier's Friday Night, we have the faltering confession and the straight embrace. Here the well-named Ernest spells out his feeling for his mother : 'You know, Mater --I don't care for her—really—not half as I care for you. Only, just now—well, I can't help it. I can't help it. But I care just the same—for you—I do.'

The movement of all three plays consists of advance and retreat, coyly skirting this central relationship, which is ducked and then des- perately ducked again in these painfully crude bouts of plain-speaking. It is Lawrence's humourlessness which defeats him in the end, banishing any trace of objectivity, dramatic tact, intelligence even, at the very moment when intellectual and emotional subtlety are most needed. Humourlessness, in short, becomes a kind of frivolity, not to say vulgarity; which is why, when not skating the surface with such gay dexterity. Lawrence as a playwright can be very cheap indeed.

And so it comes as a considerable relief to turn to the strength, lucidity and imaginative

courage of Moliere, and the Comidie de l'Ouest, now on its second visit to London (L'Avare, last performance tonight at the Camden School for Girls). This company has an exuberance and honesty to match its author's: the high spot of this production is Roger Guillot's Maitre Jacques, coachman and chef, a morose giant and pastmaster in two Parisian fine arts; the miser himself (Guy Parigot) has dwindled somewhat into a disarmingly petulant elderly gentleman; here surrounded by a troupe of brisk, sharp-eyed, acute and tolerant youth. Not perhaps quite what Moliere ordered, but admir- ably suited to the age.

Lastly I should point out that Little Boxes, at Hampstead, is directed by the excellent Philip Grout and not, as I wrote, by the equally adroit James Roose-Evans.