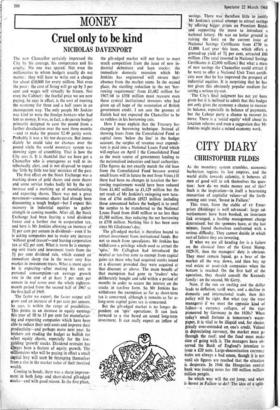 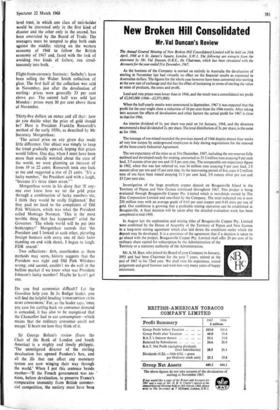 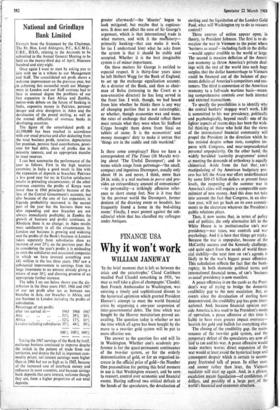 As the monetary system crumbles, economic barbarism regains its lost empires, and the world drifts towards calamity, it behoves all men of good will to ask themselves the ques- tion: how do we make money out of this? Such is the inspiration—in itself a heartening reassertion of capitalist values—of the forth- coming unit trust, 'Invest in Failure.'

This trust, from the stable of CF Enter- prises (Holdings) is well advanced: large ad- vertisements have been booked, an insurance link arranged, a healthy management charge determined; but the sponsors have, at the last minute, found themselves confronted with a serious difficulty. They cannot decide in which sort of failure they are investing.

If what we are all heading for is a failure on the classical lines of the Great Slump, 1929-31, then the managers' duty is obvious. They must remain liquid, go a bear of the market all the way down, and then buy up real estate or asset-rich companies when the bottom is reached. On the first half of the operation, they should consult the Kennedy family: on the second, Mr Getty.

Now, if the run on sterling and the dollar leads to deflation, tariff wars, and a decline in domestic and international trade, then this policy will be right. But what (say the trust managers) if we meet the opposite kind of failure—a currency collapse, of the type pioneered by Germany in the 1920s? When today's small fortune is tomorrow's waste- paper, it is vital to be illiquid and, for choice, grbssly over-extended on one's credit. Valued in depreciating currency, the market must go through the roof; and the fund must make sure of going with it. The managers have ob- served the Bank of England's intention to issue a £20 note. Large-denomination currency notes are always a bad omen, though it is not until six figures are reached that the situation is desperate. In 1946 the Hungarian central bank was issuing notes for 100 million million million pengiis.

So which way will the cat jump, and what is Invest in Failure to do? The idea of a split- level trust, in which one class of unit-holder would be interested only in the first 'kind of disaster and the other only in the second, has been overruled by the Board of Trade: The managers must be tempted to play both ends against the middle; relying on the western economy of 1968 to follow the British economy of 1967 and, faced with the task of avoiding two kinds of failure, run simul- taneously into both.

Flight-from-currency footnote : Sotheby's have been selling the Walter Smith collection ,of glass. The first half of the collection was sold • in November, just after the devaluation of sterling: prices were generally 33 per cent above par. The second half was sold last

Monday: prices were 50 per cent above those•of November.

Thirty-five dollars an ounce and all that: how do you decide what the price of gold should be? Here is President Franklin Roosevelt's method of' the early 1930s, as described by Mr Secretary Morgenthau: 'The actual price on any given day made little difference. Our object was simply to keep the trend gradually upward, hoping that prices would follow. One day, when I must have been more than usually worried about the state of the world, we were planning an increase of from 19 to 22 cents. Roosevelt took one look .at me and suggested a rise of 21 cents. "It'S a -lucky number," the President said with a laugh, "because it's three times seven."' Morgenthau wrote in his diary that 'If any- one ever knew- how we set the gold price through a combination of lucky numbers. etc, I think they would be really frightened.' But they paid no heed to the complaints of Old Pink Whiskers, which was what the President • called Montagu Norman. 'This is the most • terrible thing that has happened!' cried the Governor. The whole world will be put into -bankruptcy!' Morgenthau records that 'the President and I looked at each other, picturing foreign bankers with every one of their hairs standing on end with -shock. I began to laugh. FDR roared.'

Two reflections: first, unorthodox as these methods may seem, history suggests that• the President was right and Old Pink Whiskers wrong; and second, couldn't we do well in the bullion market if we knew what was President Johnson's lucky number? Maybe he hasn't got one.

Do you find economics difficult? Let the Guardian help you. In its Budget leader, you will find the helpful heading 'CONSUMPTION cure HURT CONSUMERS.' For, as the leader says, 'once any case for cutting back on consumer demand is conceded, it has also to be recognised that the Chancellor had to cut consumption—which means that the ordinary consumer could not escape.' It beats me how they think of it.

Sir George Bolton's review (from the Chair of the Bank of London and South America) is a mighty and timely philippic. 'The unmitigated disaster of the sterling devaluation has opened Pandora's box, and all the ills that can affect any monetary system are now winging their way through the world.' When I put this sentence beside another-1f the French government was an- xious, before devaluation, to preserve France's comparative immunity from British commer- cial competition, the anxiety must have been greater afterwards'—the 'disaster' began to look mitigated; but maybe that is captious- ness. It does not affect the core of Sir George's argument, which is that international trade is what matters, and with it the matrhinery- primarily banking—that can make it work. So (as I understand him) what he asks from the system is that it should be stable and accepted. Whether it is the best imaginable system is of minor importance.

On these matters Sir George is entitled to especial respect. It is thirty-four years since he left Helbert Wagg for the Bank of England, to set up the exchange equalisation account. As a director of the Bank, and then as chair- man of Bolsa (returning to the Court as a non-executive director) he has long served in the front line. I wish, though, we had heard from him whether he thinks there is any way of changing parities that is not catastrophic; or whether, though economies wax and wane, the rates of exchange that should reflect them must remain what they were when Sir Stafford Cripps brought them down from Sinai on tablets of stone. It is the economists' and money managers' duty to make it untrue that 'things are in the saddle and ride mankind.'

Is there some conspiracy? Here we have a correspondent of The Times (16 March) writ- ing about The Useful Davenport'; and in terms which range from patronage—`the small, compact and ingenious Davenport, usually only about 18 in. and never, I think, more than 24 in. wide, is a real mu/turn in parvo and pro- vides an extraordinary amount of convenience' —to personality—a strikingly offensive refer- ence to short stump feet. Nor is it true that 'in the postwar world the Davenport, former denizen of the drawing room or boudoir, has frequently found a home in the bed-sitting room.' Finally, I must protest against the sub- editorial whim that has classified my colleague under Antiques.