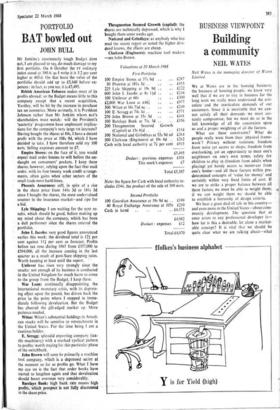 British American Tobacco makes most of its profits abroad; so the Budget means little to.this company except that a recent acquisition, Yardley, will be hit by the increase in purchase tax on cosmetics. More seriously, it is President Johnson rather than Mr Jenkins whom BAT'S • shareholders must watch: will the President's 'austerity' programme have unpleasant implica- tions for the company's very large us interests? Having bought the shares at 84s, I have a decent profit with the price at 108s 9d, Stich I have decided to take. I have therefore sold my 100 BATS. Selling expenses amount to £7.

Empire Stores: on the face of it, you would expect -mail order houses to wilt before the on- slaught on consumers pockets. I keep these shares, however, relying upon the fact that mail order, with its free twenty week credit arrange- ments, often gains when other sectors of the retail trade meet hard"times.

Phoenix Assurance: still, in spite of a rise in the share price- from 141s 3d to 18Is 3d since I bought the shares, the most undervalued counter in the insurance market—and ripe for a bid.

Lyle Shipping: I am waiting for the next re- sults, which should be good, before making up my mind about the company, which has been a dull performer since the shares entered the portfolio.

John L Jacobs: very good figures announced earlier this week: the dividend total is 12-} per cent against 111- per cent as forecast. Profits before tax rose during 1967 from £357,000 to £594,000, all the increase coming in the last quarter as a result of post-Suez shipping rates.

Worth keeping at least until the report. • Unilever has risen very strongly since the results: not enough of its business is conducted in the United Kingdom for much harm to come to the group from the Budget. I keep these.

War Loan: continually disappointing, the international monetary crisis, with its depress- ing effect upon the pound, has driven back the price to the point where I stepped in imme- diately following devaluation. But the Budget has cheered the gilt-edged market up. More patience needed.

Witan: Witan's substantial holdings in Ameri- can stocks will be sensitive to retrenchment in the United States. For the time being I am a cautious holder.

E. Scragg: splendid exporting company (tex- tile machinery) with a marked cyclical pattern to profits: worth staying for this particular phase of the switchback. '

John Brown will soon be primarily a machine tool company, which is a depressed sector at the moment so far as profits go. What I have my eye on is the fact that order books have started to lengthen again and that devaluation should boost overseas very considerably.

Throgmorton Secured Growth (capital): the shares are technically depressed, which is why I bought them some weeks ago.

National and Grindlays: as anybody who has read the recent report or noted the higher divi- dend knows, the aims are cheap.