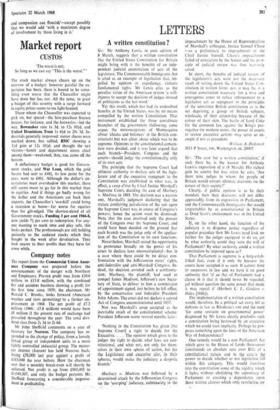 The stock market always cheers up on the morrow of a budget: however painful the ex- perience has been, there is bound to be some- thing even worse that the Chancellor might have done but has not. All the same, to greet a budget of this severity with a surge forward in equity prices seems to me light-headed. 'The worst is not, So long as we can say "This is the worst."

Those whom the Chancellor was expected to pick on; but' spared—the hire-purchase finance houses, for instance, and the breweries—led the way. Bowmaker rose Is 3d. to 12s 100, and United Dominions Trust Is 4Id to 20s 3d. In- dustrials generally improved: motor shares were marked down, •but rallied, BMC showing a lid gain at 12s 10-Id; and thought the SET victims—hotels and department stores chief among them—weakened, they, too, came-off the bottom.

A deflationary budget is good for Govern- ment stocks, and War Loan, which the gold furore had sent to £481, its low point for the year, went to £491. Although the dollar's un- certainties must overshadow this market, there still seems more to go for in this market than in equities. And if things go badly wrong for the dollar and the Americans cut back their imports, the Chancellor's 'overkill' could bring a recession at home—far worse for equities than for gilt-edged. The shortest-dated of all Government stocks, Funding 3 per cent 19664, now yields 71 per cent to redemption. For any- one wanting to mark time and play safe, this looks perfect. The professionals are still holding patiently to the undated stocks which they bought in the week after devaluation. They look nearer to their profits than they have for some while.

The report from the Commercial Union Assur- ance Company was prepared before the announcement of the merger with Northern and Employers. Pre-tax profit rose from £10.6 million to £13,8 million, with_ the combined fire and accident business showing a profit for the first time since 1959; the chairman, Mr Ronald C. Brooks, looks forward (American weather and riots permitting) to a further im- provement in :1968. The net profit of £7.3 million (1966: .£5.8 million) would have been £8 million if the present rate of exchange had prevailed throughout the -year. The total divi- dend rises from 2s 3d to 2s 6d.

Mr John Sheffield comments on a year of recovery for Norcros. The company has re- sponded to the change of policy, from a loosely linked group of independent units to a more tightly controlled industrial ,group. The motor- car interest (Jensen) has held Norcros back, losing £58,000 last year against a profit of £183,000 the year before. Here the chairman says that a monthly break-even will shortly he achieved. Net profit is up from £965,495 to £1,049,307; and only the budget prevents Mr.. Sheffield forecasting a considerable improve- ment in profitability.