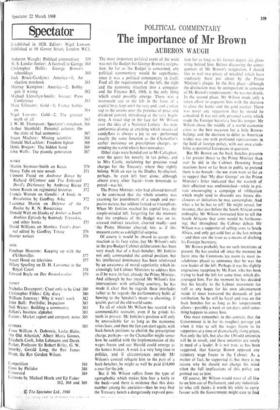 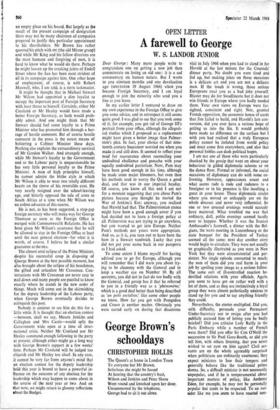 The importance of Mr Brown

Feed all the requirements of the left, the right and the economic situation into a computer and the Finance Bill, 1968, is the only thing which could possibly emerge. There was a mammoth sop to the left in the form of a capital levy, kept until the very end; and a token sop to the unions over the pretence of price and dividend control, introduced at the very begin- ning. A ritual slap in the face for Mr Wilson over the idea of a National Lottery --his non- conformist dismay at anything which smacks of candyfloss is always a joy to see—performed exactly the same function as the Chancellor's earlier insistence on prescription charges, re- minding the world who is boss nowadays.

Other slaps were handed out to Mr Callaghan, over the quest for novelty in tax policy, and to Mrs Castle, reclaiming her precious road charges for the Treasury, where they rightly belong. With an eye to the Dudley by-election, perhaps, he even left beer alone, although almost every other liquid—from lemonade to petrol—was hit.

The Prime Minister, who had allowed himself to be convinced that the whole country was yearning for punishment of a tough and pur- posive nature, has seldom looked so triumphant. When Mr Jenkins reached his capital levy, the simple-minded left. forgetting for the moment that the emphasis of the Budget was on in- creased indirect taxation, cheered madly—and the Prime Minister cheered, too, as if this measure came as a delightful surprise.

Of course it would be absurd to accept this reaction at its face value, but Mr Wilson's role in the pre-Budget Cabinet deliberations has been Very much that of a back-bencher. Mr Jenkins not only commanded the central position, but his intellectual dominance has been reinforced by an awareness of moral superiority which in- creasingly led Cabinet Ministers to address him as if he were, in fact, already the Prime Minister. And although he has treated Mr Wilson's few interventions with unfailing courtesy, he has made it clear that he regards these interludes rather as he regards the parliamentary habit of bowing to the Speaker's mace—a charming, if quaint, part of the old-world scene.

To all of which Mr Wilson has reacted with commendable restraint, even if he grinds his teeth in private. Mr Jenkins's position will only be unassailable for as long as the economic crisis lasts. and then the fun can start again, with back-bench petitions to abolish the prescription charge, perhaps—or the Chancellor might some- how be saddled with the implementation of the wages freeze and our Harold could emerge as the honest broker. A week is a very long time in politics, and if circumstances outside Mr Wilson's control relegate him to the part of a back-bencher, he might as well be paid £14,000 a year for the job.

tion for as long as his former deputy sits glow- ering behind him. Before discussing the conse- quences of Mr Brown's resignation, I should like to nail two pieces of mischief which have studiously been put about by the Prime Minister's claque. In the first place—although the distinction may be unimportant in someone of Mr Brown's temperament—he was not drunk.

In the second place, Mr Wilson made only a token effort to acquaint him with the decision to close the banks and the gold market. There was never any suggestion that he should be consulted. It was not only personal vanity which made the Foreign Secretary lose his temper. Mr Wilson chose the middle of a world economic crisis as the best occasion for a little Brown- baiting; and the decision to defer to American wishes was one with profound repercussions in the field of foreign policy, with our own credi- bility as potential Europeans in question.

But Mr Brown on the back benches presents a far greater threat to the Prime Minister than ever he did in the Cabinet. Downing Street reactions have so far been in public to pretend there is no breach—the BBC even went so far as to suggest that 'My dear George' on the Prime Minister's letter indicated that the warmth of their affection was undiminished--while in pri- vate encouraging a campaign of vilification which might tend to discredit any future dis- closures or initiatives he may contemplate. And what a lot he has to tell! He might reveal, for instance, that just before the South African arms imbroglio. Mr Wilson instructed him to tell the South Africans that arms would be forthcom- ing; that throughout the Cabinet debate Mr Wilson was a supporter of selling arms to South Africa, and only got cold feet at the last minute —and then saw the issue as a means of ditching his Foreign Secretary.

Mr Brown probably has no such intentions at present. He has cooled off since the moment he burst into the Commons tea room (a most in- salubrious place) to announce that he was the new leader of the left. Perhaps it was his slightly ungracious reception by Mr Foot, who has been trying to lead the left for some time, which dis- couraged him. For the moment he has decided that his loyalty to the Labour movement (as well as any hopes for his own advancement inside it) must transcend the demands of just retribution. So he will be loyal and true on the back benches for as long as his temperament allows—possibly a week or ten days, until some- thing happens to annoy him.

One must remember, in this context, that the Government is in for its roughest passage yet when it tries to sell the wages freeze to its supporters at a time of dramatically rising prices. Not only the left, but also the 130-odd unionists will be in revolt, and these unionists are sorely in need of a leader. It is not true, as has been suggested, that George Brown opposed any statutory wage freeze in the Cabinet. As a matter of fact, he supported it; but there is no reason why he should not change his mind when the full implications of this policy are pointed out to him.

Of course, Mr Wilson would most of all like to see him out of Parliament, and any industrial- ist who still thinks it worth his while to curry favour with the Government might care to find an empty place on his board. But largely as the result of the present campaign of denigration there may not be many chairmen of companies prepared to justify this particular appointment to his shareholders. Mr Brown has rather queered his pitch with IPC (the old Mirror group) and while Mr King and his fellow directors are the most humane and forgiving of men, it is hard to know what he would do there. Perhaps he might loosen up the creaking joints of Endell Street where the Sun has been most strident of all in its campaign against him. One other hope of employment, of course, is with Robert Maxwell, who, I am told, is a stern taskmaster.

It might be thought that in Michael Stewart Mr Wilson had appointed a dim loyalist to occupy the important post of Foreign Secretary with least threat to himself. Certainly, either Mr Crosland or Mr Healey would have made a better Foreign Secretary, as both would prob- ably admit. And one might think that Mr Stewart should feel some loyalty to a Prime Minister who has promoted him through a bar- rage of hostile comment. But of course hostile comment in the press is the surest means of bolstering a Cabinet Minister these days. Nothing else explains the extraordinary survival of Mr Gordon Walker. And strangely enough, while Mr Stewart's loyalty to the Government and to the Labour party is unquestionable he has very little personal loyalty to the Prime Minister. A man of high principles himself, he cannot admire the blithe style in which Mr Wilson is able to wear two totally different hearts on the sleeve of his reversible coat. He very nearly resigned over the school-leaving age, and bitterly opposed the sale of arms to South Africa at a time when Mr Wilson was an ardent advocate of this course.

He is not, as has been suggested, a stop-gap foreign secretary who will make way for George Thomson as soon as the Foreign Office is merged with Commonwealth Relations. He has been given Mr Wilson's assurance that he will be allowed to stay in the Foreign Office at least until the next general election—for what it is worth, of course. I believe he had a similar guarantee at the DPA.

The almost total eclipse of the Prime Minister, despite his successful coup in disposing of George Brown at the best possible moment, has also brought about the eclipse of his henchman, the gifted and articulate Mr Crossman. Con- versations with Mr Crossman are never easy to nail down and many people are puzzled to know exactly where he stands in the new order of things. Much will come out in the skirmishing for the deputy leadership of the Labour party, when George Brown eventually decides to relinquish this post.

Nobody is anxious to see him do this for a • little while. It is thought that an election contest —between, shall we say, Messrs. Jenkins and Callaghan and Mrs Castle—would split the Government wide open at a time of inter- national crisis. Neither Mr Crosland nor Mr Healey command enough following in the party at present, although either might go a long way with George Brown's support in a few weeks' time. Perhaps Mr Crosland will be judged too cliquish and Mr Healey too aloof. In any case, it cannot be very far from anyone's mind that an election contest for the deputy leadership held this year is bound to have a powerful in- fluence on the outcome of any election for the leadership which may happen to come about in the course of the next year or two. And on that note, we might return to gloomy reflections about the Budget.