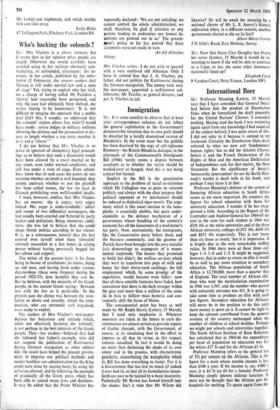 Who's backing the colonels?

Sir: Mrs Vlachos is a clever woman; but it seems that in her opinion other people are stupid. Otherwise she would carefully have avoided using in her writings obviously con- tradictory, or unfounded, statements : for in- stance, in her article, published by the SPEC- TATOR (2 February), she assures readers that `Greece is still under martial law and a state of siege.' Yet, trying to explain why her trial, on a charge of having called Mr Pattakos a 'clown,' had repeatedly been postponed, and why the case had ultimately been shelved, she writes (trying to be humorous): 'It is not difficult to imagine the spectacle that a public trial [isn't this, I wonder, an admission that the colonels' regime allows free trials/ would have made: severe judges in military uniform allowing the defence and the prosecution to dis- cuss at length whether a top junta member is or is not a "clown."' I do not believe that Mrs Vlachos is so naïve or ignorant of elementary legal proceed- ings as to believe that such a discussion would have been allowed by a court martial or by any court, even under normal conditions, and still less under a state of siege. Even school- boys know that in such cases the courts do not examine whether an insult is well founded; they simply ascertain whether or not the plaintiff has been called names, the law (at least in Greece) prohibiting even well-founded insults.

I must, however, confess that Mrs Vlachos has an excuse: she is angry; very angry indeed. Her anger is understandable: editor and owner of two influential newspapers, she had usually been courted and flattered by party leaders and politicians. Being, moreover, ambi- tious, she was led to believe that she could shape Greek politics according to her whims. It is, as a consequence, natural that she lost control over herself when these 'clownish' colonels succeeded in a few hours in seizing power without having previously begged for her advice and support.

The writer of the present letter is far from being in favour of revolutions; he knows, being an old man, and having lived under various dictatorships (these were frequent during the period 1922-35), how harmful they can be. But he believes, with the majority of the Greek people, in the ancient Greek saying: 'Between two evils the less so is preferable.' In the present case the choice was between the revo- lution or chaos and anarchy, which the com- munists, who are extremely well organised, were ready to exploit.

The readers of Mrs Vlachos's newspapers deplore her behaviour and attitude which, while not effectively harming the 'colonels,' is not perhaps in the best interests of the Greek people. They—her readers—believed that had she followed her father's example, who did not suspend the publication of Kathimerini during German occupation as other editors did, she could have helped the present govern- ment to improve our political methods and render healthier our administration (as the King could have done by staying here), by using the criticism allowed, and by following the example of practically all the Greek press, which has been able to amend many laws and decisions. It may be added that the Prime Minister has repeatedly declared: `We are not unfailing; we cannot control the whole administration; we shall, therefore, be glad if mistakes or any actions tending to undermine our honest in- tentions are pointed out to us.' The govern- gaent's policy so far has proved that these ;tatements were not made in vain.

An old Athenian Athens Mrs Vlachos writes: I do not wish to quarrel with a very confused old Athenian. Only I have to remind him that J. A. Vlachos, my father, did not publish the Kathimerini during the German occupation. The enemy took over the newspaper, appointed a well-known col- laborator, Mr Travlos, as general director, and put A. Vlachos in jail.