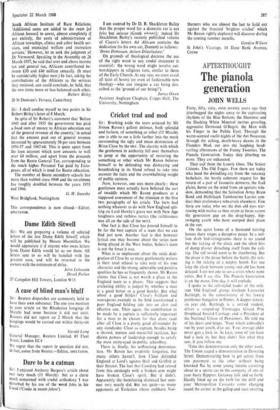 Dare to be a catman

Sir: I enjoyed Anthony Burgess's article about cats very much (15 March): but as a cleric much concerned with credal orthodoxy I was disturbed by his use of the ward fetes in his Creed (`Credo in unum felem). I am assured by Dr D. R. Shackleton Bailey that the proper word for a domestic cat is not feles but aelurus (Greek adtoePoS): indeed Dr Shackleton Bailey's recently published volume of Cicero's letters Ad Alticurn contains the dedication (to his own cat, Donum) as follows: 'Dona Donosum, Aeluro Dilectissimo.'

On grounds of theological doctrine the use of the right word in any credal statement is essential: the wrong word might involve cat- worshippers in religious riots, similar to those of the Early Church. At any rate, we must avoid all taint of heresy (or even of fashionable new theology—who can imagine a cat being des- cribed as the 'ground of our being?').