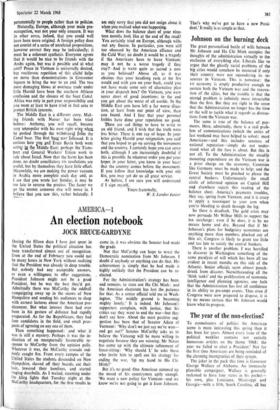 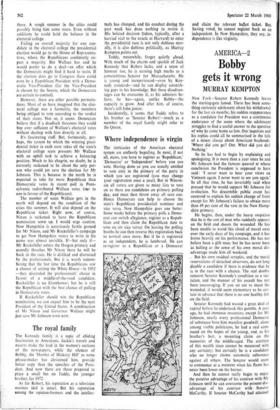 During the fifteen days I have just spent in the United States the political situation has been transformed almost out of recognition. Even at the end of February you could not be many hours in New York without realising that the President was already in deep trouble. But nobody had any acceptable answers, or even a willingness to offer suggestions. President Johnson might not be a good President, but he was the best they'd got. Admittedly there was McCarthy the oddball campaigning away up in the snows of New Hampshire and sending his audiences to sleep with earnest lectures about the American pre- dicament. But what interest there had ever been in his gesture of defiance had rapidly evaporated. As for the Republicans, they had four candidates in the field, and small pros- pects of agreeing on any one of them.

Then something happened: and what it was is still a mystery. Perhaps it was the in- dication of an unexpectedly favourable re- sponse to McCarthy from the opinion polls. Whatever it was, the McCarthy crusade sud- denly caught fire. From every campus of the United States the students descended on New Hampshire, shaved off their beards, cut their hair, lowered their hemlines, and started ringing doorbells. As I waited, steaming under the )(Reg lights that Tuesday night at the McCasthy headquarters, for the first results to come in, it was obvious the Senator had made the grade.

Not that McCarthy can hope to wrest the Democratic nomination from Mr Johnson. I doubt if anybody or anything can do that. His achievement is simply that he had made it highly unlikely that the President can be re-

For the Administration's strategy has been. and remains, to stare out Ho Chi Minh: and the American electorate has lost the patience for that. As a senior official told me in Wash- ington, 'The middle ground is becoming mighty lonely.' It is indeed. Mr Johnson's supporters complain, with justice, that his critics say they want to end the war—but they don't say how. About the most positive sug- gestion has been that of Senator Aiken of Vermont: 'Why don't we just say we've won— and get out?' Senator McCarthy asks us to believe the Vietcong will be more willing to negotiate because they are winning. Mr Nixon has come up with the ultimate refinement of fence-sitting: 'Why should I,' he asks those who invite him to spell out his strategy for ending the war, 'tip my hand to Ho Chi Minh?'

But it's no good. One American summed up the mood of his countrymen aptly enough. 'We want a new policy for Vietnam—and we know we're not going to get it from Johnson. That's why we've got to have a new Presi- dent.' It really is as simple as that.

Johnson on the burning deck

The great personalised battle of wills between Mr Johnson and Ho Chi Minh occupies the thoughts of the administration virtually to the exclusion of everything else. Liberals like to argue that the ghastly racial problems of the big cities would somehow be mastered if only their country were not squandering its re- sources in Vietnam. This is nonsense: the us economy is amply productive enough to sustain both the Vietnam war and the renova- tion of the cities, but the trouble is that the second problem is infinitely more intractable than the first. But they are right in the sense that the Administration no longer has the time or the will to tackle what it regards as distrac- tions from the Vietnam war.

The same is true of the balance of pay- ments. Here, admittedly, there is a real prob- lem of communications (which the antics of last weekend may have helped to solve): most Americans—and this includes senators of national reputation—simply do not under- stand what all the fuss is about. But this is not all. To the Administration the steadily mounting expenditure on the Vietnam war is a prior charge on •the economy. Countries like Germany must be made to help; and the Great Society must be pinched to please the central bankers. Unfortunately the small circle of informed opinion on Capitol Hill and elsewhere rejects this reading of the balance sheet. America's payments troubles, they say, spring from Vietnam, and it is crazy to apply a tourniquet to your arm when you're bleeding to death through the leg.

So there is deadlock. The gold crisis may now persuade Mr Wilbur Mills to support the tax surcharge: even if he does, it is by no means home and dry. Beyond that if Mr Johnson's plans for budgetary economies are anything more than numbers plucked out of thin air, Congress is likely to grant too little and too late to satisfy the central bankers.

There is another problem. I was horrified to discover in Washington something of the same paralysis of will which has been all too evident in recent months on this side of the Atlantic. Senior officials seem almost punch- drunk from disaster. Notwithstanding all the 'think tanks' and the proliferation of economic intelligence and planning agencies, one feels that the Administration has lost all confidence in its ability to pre-empt events. Thus even if Congress were now prepared to dispose, it is by no means certain that Mr Johnson would know what to propose.

The year of the non-election?

To connoisseurs of politics the American scene is more interesting this spring than it has been for years. Almost every issue of the political weeklies contains not entirely humorous articles on the theme '1968: the year we failed to elect a President.' Not for the first time Americans are being reminded of the alarming incongruities of their system.

The joker in the pack this time is Governor George Wallace of Alabama. An immensely plausible campaigner, Wallace is generally reckoned to have four states in his pocket— his own, plus Louisiana, Mississippi and Georgia—with a fifth, South Carolina, all but

there. A rough summer in the cities could possibly bring him some more. Even without additions he could hold the balance in the electoral college.

. Failing an overall majority for one can- didate in the electoral college the presidential election would go to the House of Representa- tives, where the Republicans confidently ex- pect a majority. But Wallace has said he would prefer to do a deal—an offer which the Democrats might find it hard to resist. If the election does go to Congress there could even be a Republican President with a Demo- cratic Vice-President (for the Vice-President is chosen by the Senate, which the Democrats are certain to control).

However, there are other possible permuta- tions. Most of us have imagined that the elec- toral college was a formality, the members being obliged to vote according to the verdict of their states. Not so, it seems. Democrats believe that if a deadlock threatens they could buy over sufficient of Wallace's electoral votes without dealing with him directly at all.

It's fascinating stuff. But, fortunately, per- haps, the system by which the winning presi- dential ticket in each state takes all the state's electoral college seats presents Mr Wallace with an uphill task to achieve a balancing position. Much to his chagrin, no doubt, he is currently reckoned to be about the only per- son who could yet save the election for Mr Johnson. This is because in the north he is expected to take far more Republican than Democratic votes (a recent poll in Penn- sylvania redistributed Wallace votes four to one in favour of the Republicans).

The number of votes Wallace gets in the north will depend on the condition of the cities this summer. It will also depend on the Republican ticket. Right now, of course, Nixon is reckoned to have the Republican nomination sewn up. I would urge caution. New Hampshire is notoriously fertile ground for Mr Nixon, and Mr Rockefeller's campaign to get New Hampshire voters to write in his name was almost invisible. If—but only if— Mr Rockefeller enters the Oregon primary and soundly thrashes Mr Nixon there he will be bank in the race. He is disliked and distrusted by the professionals. But it is worth remem- bering that the last time the Republicans saw a chance of seizing the White House—in 1952 —they discarded the professionals' choice in favour of a middle-of-the-road candidate. Rockefeller is no Eisenhower; but he is still the Republican with the best chance of pulling in Democratic votes.

If Rockefeller should win the Republican nomination, we can expect him to be the next President of the United States. A combination of Mr Nixon and Governor Wallace might just save Mr Johnson even now.

The Kennedy family is a topic of abiding fascination to Americans. Jackie's travels and escorts make the lead in the women's sections of the newspapers, while the silences of Bobby, the 'Hamlet of Hickory Hill' as some phrase-maker has christened him, provide better copy than the speeches of the Presi- dent. And now there are those prepared to place a small bet on Teddy, the younger brother, for 1972.

tnals has slumped, and his conduct during the past week has done nothing to revive it.

His belated decision (taken, typically, after a hurried visit to the oracle at Harvard) to enter the presidential race is not only dubious mor- ally, it is also dubious politically, as Murray Kempton points out.

Teddy, meanwhile, forges quietly ahead. With much of the charm and sparkle of Jack Kennedy that Robert lacks, and a sense of humour too, he is earning high marks as a conscientious Senator for Massachusetts. He is young and inexperienced—even by Ken- nedy standards—and he can display astonish- ing gaps in his knowledge. But these disadvan- tages can be overcome if, as his admirers be- lieve, he has—again, unlike Bobby—the capacity to grow. And after him, of course, there's still John junior.

Incidentally, it seems that Teddy refers to his brother as 'Senator Robert'—much as a member of the royal family might refer to the Queen.

Where independence is virgin The intricacies of the American electoral system are endlessly beguiling. In most, if not all, states, you have to register as 'Republican,' 'Democrat' or 'Independent' before you can vote. Having done so you are usually entitled -to vote only in the primary of the party in which you are registered (you may change your registration once a year).. But in Wiscon- sin all voters are given as many lists to vote on as there are candidates on primary polling day, and must then throw away all save one. Hence Democrats can help to choose the state's Republican presidential nominee and vice versa. New Hampshire goes one better. Some weeks before the primary polls a Demo- crat can switch allegiance, register as a Repub- lican and then claim the Republican slate to vote on (or vice versa). On leaving the polling booths he can then reverse this registration back to normal once more. But if he is registered as an independent, he is lumbered. He can re-register as a Republican or a Democrat

and claim the relevant ballot ticket. But. having voted, he cannot register back as an independent. In New Hampshire, they say, in- dependence is like virginity.