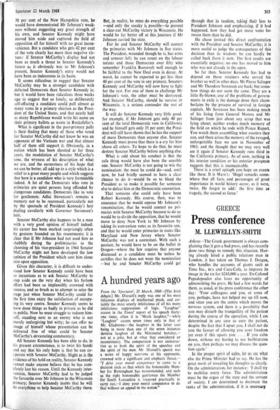 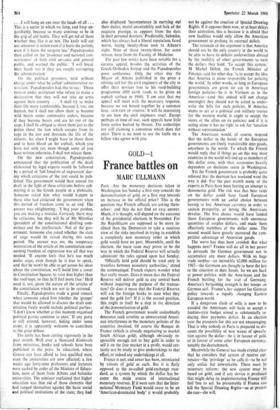 Athens—The Greek government is always com- plaining that it gets a bad press, and has recently done two things to remedy this situation. Hav- ing already hired a public relations man in London, it has taken on Thomas J. Deegan, who handles the accounts of giants such as Time Inc., RCA and Coca-Cola, to improve its image in the us for $243,000 a year. Ex-Colonel Papadopoulos also loses no opportunity of admonishing the press. He had a few words for them, as usual, at his press conference the other day: `Your colleagues and you, or some of you, perhaps, have not helped me up till now, and since you are the centre which moves the nervous system, and there is a possibility that you may disturb the tranquillity of the patient during the course of the operation, while I am determined in any case to cure the patient, despite the fact that I upset you, I shall not do you the favour of allowing you your freedom yet even if this upsets you. . . . If you calm down, without my having to use barbiturates on you, then perhaps we may discuss the ques- tion again.'

In the proper spirit of calm, let us see what else the Prime Minister had to say. He has the great merit of revealing his thoughts so clearly. On the administration, for instance : `I shall try to mobilise every force. The administration must be the organ of the state and the servant of society. I am determined to decimate the ranks of the administration, if it is necessary

... I will hang an axe over the heads of all ... This is a sector in which we limp, and limp un- justifiably, because so many continue to be in the grip of old habits. They will get rid of them whether they like it or not. The knife will cut out whatever is rotten even if it hurts the patient, even if it hurts the surgeon too.' Papadopoulos then called on the 'prudence and national con- sciousness' of both civil servants and general public, and warned the public: 'I will break their heads too if they are caught corrupting the administration.'

On the political prisoners, held without charge under what he called 'administrative re- striction,' Papadopoulos had this to say : 'Those remain under ;estriction who refuse to make a declaration that they will not take up arms against their country. . . . I shall try to make their life more comfortable, because I, too, am human, but I shall not allow them to become wild beasts under communist orders, because if they become beasts and are let out of the cage, I shall be obliged to shoot them just as the police shoot the lion which escapes from its cage in the zoo and threatens the life of the citizens. So, since I might have to shoot them and to have blood on the asphalt, ,which, you have not seen yet, even though some of you have written otherwise, I shall not release them.'

On the new constitution, Papadopoulos announced that the publication of the draft elaborated by legal experts would be followed by a period of 'full freedom of expression' dur- ing which criticisms of the text could be pub- lished. The government would then amend the draft in the light of these criticisms before sub- mitting it to the Greek people in a plebiscite. Someone asked him what would happen to those who had criticised the government when this period of freedom came to an end. The answer was enlightening: 'I beg your pardon, you are making a mistake. Certainly there may be criticisms, but they will be of Mr Mitrelias (president of the constitutional drafting com- mittee) and the intellectuals.' Not of the gov- ernment. Someone else asked whether the state of siege would be raised during this same period. The answer was no; the temporary restoration of the article of the constitution con- cerning freedom of expression was all that was needed. 'If anyone feels that he's too much' under siege, even though he is free to speak, and that he won't be able to get across his ideas about the constitution, we'll build him a tower in Constitution Square, to raise him higher than the roof-tops, so that he'll feel more free.' He'd need it, too, given the nature of the articles of the constitution which are not to be restored.

Finally, Papadopoulos made a good remark when someone asked him whether the 'groups' that would be allowed to discuss the draft con- stitution freely would include political parties; `I don't know whether at this moment organised

political parties continue to exist.' If any party is still around, however, hiding under some stotte, it is apparently welcome to contribute to the great debate.

The knife has been cutting vigorously in the past month. Well over a thousand dismissals from ministries, banks and schools have been published in the press. In education, , where Greece can least afford to lose qualified men, even the universities are now affected; a few .

weeks ago forty-nine professors and lecturers were sacked by order of the Minister of Educa- tion, most of them from Athens and Salonika universities. The minister explained that higher education was thus rid of those elements that had ranged themselves against the bask social and political institutions of the state; they had also displayed 'incompetence in carrying out their duties, moral unsuitability and lack of the requisite prestige, as appears from the data in their personal dossiers.' Predictably, Salonika, which has always had a liberal reputation-, fared worse, losing twenty-three men to Athens's eight. Nine of those twenty-three, for some reason, were from the Faculty of Medicine.

The past few weeks have been notable for a curious appeal, besides the activities of the Greek Orthodox bishop and the Papadopoulos press conference. Only the other day the Mayor of Athens published in the press a stirring call for the civil engineers of the city to offer their services free to his road-building programme (450 earth roads to be given an asphalt surface in 1968). 'I am sure that my appeal will meet with the necessary response, because we are bound together by a common love: OUR CITY OF ATHENS: It Will be interesting to see how the civil engineers react. Except perhaps in time of war, such appeals have little force unless backed by threats. The authorities are still claiming a consensus which does n'ot exist. There is no need to use the knife on a fellow who agrees with you.