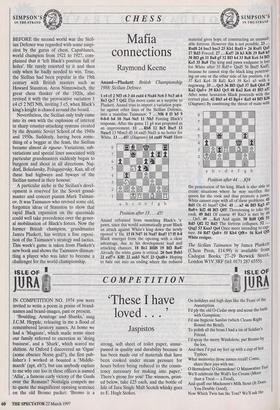 BEFORE the second world war the Sicil- ian Defence was regarded with some suspi- cion by the gurus of chess. Capablanca, world champion from 1921 to 1927, com- plained that it 'left Black's position full of holes'. He rarely resorted to it and then only when he badly needed to win. True, the Sicilian had been popular in the 19th century with British masters such as Howard Staunton. Aron Nimzowitsch, the great chess thinker of the 1920s, also revived it with the provocative variation 1 e4 c5 2 Nf3 Nf6, inviting 3 e5, when Black's king's knight is chased around the board.

Nevertheless, the Sicilian only truly came into its own with the explosion of interest in sharp counter-attacking systems created by the dynamic Soviet School of the 1940s and 1950s. Suddenly, having been some- thing of a beggar at the feast, the Sicilian became almost de rigueur. Variations, sub- variations and special lines associated with particular grandmasters suddenly began to burgeon and shoot in all directions. Naj- dorf, Boleslaysky, Polugayevsky, Kan, all of these had highways and byways of the Sicilian named in their honour.

A particular niche in the Sicilian's devel- opment is reserved for the Soviet grand- master and concert pianist Mark Taiman- ov. It was Taimanov who revived some old, forgotten ideas of Staunton to show that rapid Black expansion on the queenside could well take precedence over the gener- al mobilisation of Black's forces. Now the former British champion, grandmaster James Plaskett, has written a fine exposi- tion of the Taimanov's strategy and tactics. This week's game is taken from Plaskett's new book and shows the Taimanov disman- tling a player who was later to become a challenger for the world championship.

Anand refrained from snatching Black's 'a' pawn, since this would automatically grant Black an attack against White's king down the newly opened 'a' file. 15 f4 Nd7 16 Nxd7 Bxd7 17 f5 0-0 Black emerges from the opening with a clear advantage, due to his development lead and attacking chances. 18 Bet Rfd8 19 Bf3 Ba4! Already the white game is critical. 20 fxe6 Bxb3 21 ext7+ K18! 22 axb3 Nc3! 23 Qxd8+ Hoping to bale out into an ending where the reduced