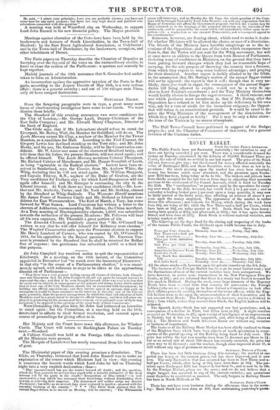 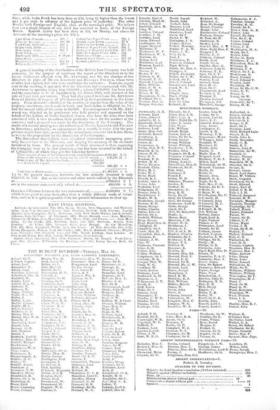 The Public Funds have not fluctuated materially ; the variation in any et them not having exceeded 4 per cent. There was a considerable demand for money on Tuesday, occasioned by the delivery of 50,0001. Reduced Three per- Cents., the sale of which we noticed in our last report The price of the Stock did not, however, give way; but the demand for money affected materially the value of Exchequer Bills, and these Securities were then done as low as la. premium : the stock pressing upon the market has since been absorbed ; money has become much more abundant, and the premium upon Exche- quer Bills has risen, being today at 8s. to 10s. The brokers and jobbers have been chiefly occupied for the last two or three days in adjusting their accounts previous to the settlement of the Consul Account, which is fixed for Tuesday the 25th. The " continuation," or premium paid by the speculator for carry- ing over stock to the July. Account, has varied from 4 to 4 per cent.; and as yesterday a leading broker gave per cent. upon a large quantity, it may now be fairly quoted at the latter price, thus affording an interest of about 4 per cent. upon the money employed. The appearance of the market is rather firmer this afternoon ; and Consols for Money, which during the week have been 894, are today at 90; while the New Three-and-a-half per Cents., which have been at 984, are today quoted at 984 India Stock has been heavy ; having been quoted at 2514, and afterwards at 2504 ; but it has again become firmer, and been done at 2514. Bank Stock is without material variation, and is today marked at 168.

The following are the days fixed for the closing and reopening of the books - of the various Public Funds, the dividends upon which become due in July.

All the above stocks will, however, open for private transfer on the 6th July. The business of the Foreign Market has been on its usual limited scale; and the fluctuations of most of the current varieties have been unimportant. We have, however to notice some transactions in the New Portuguese Five per Cents., at 294% and are informed that there is a steady but limited demand for this stock in Holland. During the week, some large amounts of the Regency Bonds have been received from that country for conversion : the Foreign holders (who are not so happy as to have formed a Committee to look after their affairs) generally availing themselves of the terms offered, while the Eng- lish holders seem to act upon the recommendation of their Committee and do not convert their Bonds. The Foreigners will, however, receive a dividend in July; from which, unless they convert their Stock, the English holders will be debarred.

The Spanish Active Stock has not supported our last quotations ; and, in consequence of a decline in Paris, had fallen here to 234. A slight reaction occurred on Wednesday, to 23k, upon receipt of intelligence of an improvement in Madrid; but it has not been supported, and, after being at 234, closes at 234 4. The Mexican and South American Bonds are without any variation or business of importance.

The business of the Railway Share Market has been chiefly confined to those of the Brighton line; which have been objects of much speculation in conse- quence of the partial opening of the Railway being fixed for July next. The price has within the last two months risen from 71. discount per Share to 14; but as an actual sale of about 700 shares has recently occurred, the price has given way to 44 discount ; and-the market, though since improved about IL, is still without any sign of permanent recovery. SATURDAY, TWELVE o'Curew.

There has been but little business doing this morning; the market at one period was heavy at the current prices, but has since improved, and is now firm. The only fluctuation that has occurred has been in New Three.and-a- half per Cents., which, after being at 984, have been done at 984. The pre- mium upon Exchequer Bills has improved, has been 9s., and is now 8s. to les. In the Foreign Market, prices are the same ; and we do not believe that a single bargain has occurred in any of the current varieties ; our quotations must therefore be considered as nominal. The only bargain in Railway Shares has been in North Midland, at 70.

SATURDAY. FOUR o•CLoaw. There has not been more business during the afternoon than in the morn- ing: Bank Stock has been done at 168, thus maintaining yesterday's quota-. tion; while India Stock has been done at 252, being 1} higher than the lowest and per cent. in advance of the highest price of yesterday. The other Stocks, both Foreign and English, close at the morning's price. We believe that not a single bargain of any kind has occurred in many of the Foreigu Bonds. Spanish Active has been done at 23i for Money, but closes for Account at the morning's price, viz. 231j

A general meeting of the shareholders of the British Iron Company was held yesterday, for the purpose of receiving the report of the Directors as to the recent settlement effected with Mr. ATTWOOD, and for the election of two Directors in place of .111e,srs. LARFENT mid lloasLEv PALMER, whose term of office had expired, but who were candidates for reelection. From the report read to the meeting, it appeared that the Directors had compromised with Mr. ATTWOOD by agreeing to pay him 350,0001. ; whereof 200,000/. has been paid, and the remainder is to be liquidated by 1st March 1544, with interest at the rate of 5 per cent. per annum. They had also agreed to release Mr. ATTWOOD from all liability in respect of 200 shares held by that gentleman in the Com- pany. From accounts exhibited at the meeting, it appears that the value of the property, machinery, stock, cash in hand, and book-debts, is 883,6041- 9s. id. ; and the annual value of the estate is 45,0001. The arrangement with Mr. ATT- WOOD was objected to by gentlemen who held proxies and appeared on the behalf of the holders of twelve hundred shares, who have for some time been associated with a view to enforce their particular views for the conduct of the concern ; and a proposal was made for the dissolution of the Company-. The result of a stormy meeting was the reelection of Messrs. LAnpENT and PALMER as Directors ; and finally, an adjournment for a mouth, in order that the pro- prietors might have time to consider the voluminous accounts laid before them, as well as the proposition for the dissolution of the Company. The dissentient shareholders have circulated statements impugning gene- rally the conduct of the Directors, and denying the accuracy of the accounts furnished by them. The general result of their statement is that, supposing the Company were to be now dissolved, a loss has been incurred to the extent of 1,462,6701.; of which they give the following heads—

which is too great to arise from other than a widely i different mode of valua- tion, such as it is quite impossible with our present information to clear up.