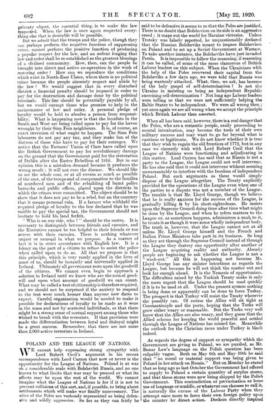 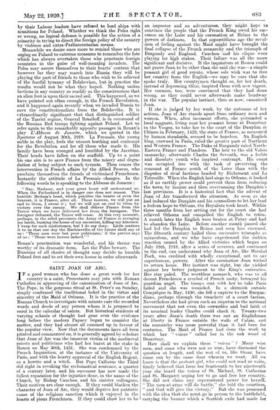 POLAND AND THE LEAGUE OF NATIONS.

WE cannot help expressing strong sympathy with Lord Robert Cecil's argument in his recent correspondence with Lord Curzon that now or never is the opportunity for the League of Nations. Poland is at war oh a considerable scale with Bolshevist Russia, and no one knows to what limits that war may be pressed or what its effects may be upon the rest of the world. We cannot imagine what the League of Nations is for if it is not to prevent collisions of this sort, and, if possible, to bring about settlements which will make war finally unnecessary. The aims of the Poles are variously represented as being defen- sive and wildly aggressive. So far as they can fairly be said to be defensive it seems to us that the Poles are justified. There is no doubt that Bolshevism on its side is an aggressive creed ; it maps out the world for Marxian victories. Unless Trotsky was falsely reported, he unquestionably .declared that the Russian Bolsheviks meant to impose Bolshevism on. Poland and to set up a Soviet Government at Warsaw. To take another instance, the Bolsheviks have just invaded Persia. It is impossible to follow the reasoning, if reasoning it can be called, of some of the more clamorous of British Labour leaders on this subject. When the Ukrainians with the help of the Poles recovered their capital from the Bolsheviks a few days ago, we were told that Russia was being wantonly attacked. What, then, we ask, has become of the holy gospel of self-determination ? Is not the Ukraine in insisting on being an independent Republic exercising self-determination ? Not long ago Labour leaders were telling us that we were not sufficiently helping the Baltic States to be independent. We were all wrong then ; yet once again we are all wrong when we accept the principle which British Labour then asserted.

When all has been said, however, there is a real danger that the Poles, who are a romantic people, easily proceeding to mental intoxication, may become the tools of their own military success and may want to go far beyond what is cautious or legitimate. We do not know whether it is true that they wish to regain the old frontiers of 1772, but in any ease we sincerely wish with Lord Robert Cecil that the League of Nations were functioning and adjudicating in this matter. Lord. Curzon has said that as Russia is not a party to the League, the League could not well intervene. He has also said that it could not intervene without seeming unwarrantably to interfere with the freedom of independent Poland. But such arguments as these would simply dispose of the League altogether. The Treaty explicitly provided for the operations of the League even when one of the parties to a dispute was not a member of the League. The trouble is that Mr. Lloyd George, though we believe that he in really anxious for the success of the League, is gradually killing it by his short-sightedness. He insists upon the Supreme Council doing time after time what might be done by the League, and when he refers matters to the League or, as sometimes happens, adrhinisters a snutt to it, he treats it as though it were some wholly independent body. The truth is, however, that the League cannot act at all unless Mr. Lloyd George himself and the French and Italian Prime Ministers take part in its business. So long as they act through the Supreme Council instead of through the League they destroy one opportunity after another of the League acquiring reality and authority. Already people are beginning to ask whether the League is not a wash-out." All this is happening not because Mr. Lloyd George has any sinister intentions as regards the League, but because he will not think the matter out and look far enough ahead. It is the Nemesis of opportunism. The difficulties raised by the Turkish Treaty make it only the more urgent that the League should be used quickly if it is to be used at all. Under the present system nothing is being done or apparently can be done to force Turkey. The prospect is that Turkey will resist the Treaty wherever she possibly can. Of course the Allies will sit tight at Constantinople and the ports, hoping that the Turks will grow either weary or reasonable. But the Turks very well know that the Allies are also weary, and they guess that the Allied scheme for keeping the world peaceful and settled through the League of Nations has missed fire. Meanwhile the outlook for the Christian races under Turkey is black indeed.

As regards the degree of support or sympathy which the Government are giving to Poland, we are puzzled, as Mr. Bonar Law's language on the Polish question has been culpably vague. Both on May 6th and May 10th he said that " no moral or material support was being given to Poland in her attack on Russia." But on Monday he stated that as long ago as last October the Government had offered to supply to Poland a certain quantity of surplus stores, and that these stores were now being shipped by the Polish Government. This contradiction or prevarication or loose use of language or muddle, or whatever one chooses to call it, is naturally the excuse of the Labour Party when they attempt once more to force their own foreign policy upon the country by direct action. Dockers directly inspired by their Labour leaders have refused to load ships with munitions for Poland. Whether we think the Poles right or wrong, no logical defence is possible for the action of a minority in trying to direct the foreign policy of the country by violence and extra-Parliamentarian means. Meanwhile we desire once more to remind those who are urging on Poland to extreme measures to remember the fate which has always overtaken those who penetrate foreign countries in the guise of well-meaning invaders: The Poles may assure themselves to their hearts' content that however far they may march into Russia they will be playing the part of friends to those who wish to be relieved of the fearful tyranny of Bolshevism, but in practice the results would not be what they hoped. Nothing unites factions in any country so readily as the consciousness that an alien foot is upon their sacred soil. This happened, as we have pointed out often enough, in the French Revolution, and it happened again recently when we invaded Russia to save the constitutionalists from the Bolsheviks. It is extraordinarily significant that that distinguished soldier of the Tsarist regime, General Brushoff, is in command of the Russian Red troops fighting against Poland. Let us refer again. to the remarkably apposite passages in Renan's play L'Abbesse de Jouarre, which we quoted in the Spectator of August 30th, 1919. La Fresnais, the young noble in the play, feels the utmost loathing and contempt for the Revolution and for all those who made it. His family have been wronged and humbled by the Jacobins. Their heads have fallen on the scaffold. Up to a point his one aim is to save France from the misery and degra- dation of being subject to such tyrants. Then comes the intervention in French affairs by the Allied Powers, who proclaim themselves the friends of victimised Frenchmen. Instantly the attitude of La Fresnais changes. In the following words he is speaking to the Abbesse de Jouarre

" Nay, Madame, and your great heart will understand us. When the Fatherland is in danger one does not reason. This horrible Medusa's head, which petrifies the hearts of even the bravest, it is France, after all. These horrors, we will put an end to them, I swear it ; but we will put an end to them by victory over the enemy. We shall deliver France from the Terror when we have delivered her from. the foreigner. The foreigner defeated, the-Terror will cease. At this very moment, perhaps, in the rebel provinces the Army of France is ravaging my lands, burning thelieme of my ancestors, killing my kinsmen. I weep for such misfortunes, but I do my duty. Little matters it to us that one day the Machiavellis of the future shall -say of us : Those men were but poor politicians,' if the patriot says of us : ' Those were heroes indeed.' "

Renan's penetration was wonderful, and his theme was worthy of its dramatic form. Let the Poles beware. The Russians of all shades of thought may decide to humble Poland first-and to set their own house in order afterwards