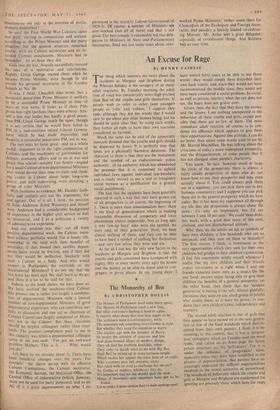 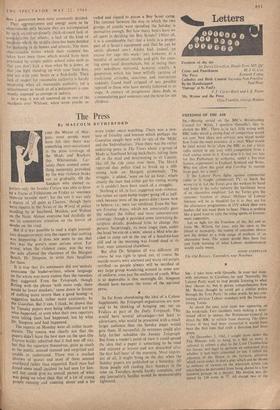 An Excuse for Rage

By HENRY FAIRLIE rr HE thing which interests me most about the I incidents at Margate and Brighton during the Whitsun holiday is the savagery of so many adult reactions. By Tuesday morning the adult tone of voice was considerably more high-pitched than that of the youths and girls themselves. If people wish to refer to other (and younger) people as 'yobs' and 'yobbos,' I suppose they may, although they are not words that I would care to use about any other human being; but we should be quite clear that, by using such words, they forfeit all right to have their own, reactions considered as rational.

Much the same can be said of the apparently innocent demand that the youths and girls should be dispersed by hoses. It is perfectly true that hoses are a physically harmless deterrent. The objection to them is that they are the instrument and the symbol of an indiscriminate police authority: of an authority which has abandoned the pretence that it is concerned to uphold individual laws against individual law-breakers, and is ready instead to use a real or imaginary social menace as a justification for a general social punishment.

The fact that the incidents have been generally reported in such a way that they have grown out of all perspective is, of course, the beginning of it. There is more than sensationalism here; there is the kind of generalisation which is making reasonable discussion of temporary and local phenomena almost impossible. Not so long ago, it was 'ton-up boys' who were the symbol, we were told, of their generation. Now, we hear almost nothing of them, and they can be seen to have been a symbol of nothing but themselves —and very few selves they were and are.

As far as I can see, the only new factor in the incidents at Margate and Brighton is that the youths and girls concerned have (compared with eighty, fifty or even twenty years ago) the leisure and the money to be able to travel and to con- gregate in given places. In my young days—I

have waited forty years to be able to use those words—they would simply have disturbed their own back streets; and, since they would not have inconvenienced the middle class, they would not have been considered a social problem. In social, as well as private, matters, what the eye does not see, the heart does not grieve over.

Given, then, the fact that they have the money and the leisure, I see nothing unexpected in the behaviour of these youths and girls, except pos- sibly that there are so few of them. The most immediate adult reaction, of course, is to con- demn the affluence which appears to give them their opportunities. Against this attitude, I can do no better than quote some words used to me by Mr. Harold Macmillan. He was talking about the criticisms of today's more widespread prosperity, and the disappointment of some people that it has not changed other people's characters.

'You know,' he said, 'however small or large the circle of the prosperous, there is always a fairly steady proportion of them who do not know how to use their prosperity and may even actually abuse it. You could always pick them out in a regiment; you can pick them out in any business community; and I suppose you can pick them out in the general prosperity which we have today. But it has been my experience all through my life that the proportion is always about the same: it's only an impression, but I'd say between 5 and 10 per cent.' We could have done, this week, with a good deal more of this cool, civilised, and not disenchanted attitude.

Why, then, do the adults set up, as symbols of their own children, a few hundreds who are so untypical, and then turn on them so heatedly? The first reason, I think, is resentment at the very opportunities which they seek for their own children, but grudge to their children's generation. .(l feel this resentment mildly myself whenever I realise, that my own children and their friends expect ice-creams as a right when I and my friends expected them only as a treat.) On the one hand, parents enjoy being able to give their children the benefits of a general prosperity; on the other hand, they think that the 'modern generation' is having it too soft. Almost gleefully, therefore, they seize on any small group of youths who enable them, as it were by proxy, to con- demn their own children's case, independence and manners.

The second adult reaction is one of guilt that they appear to have passed on to the next genera- tion so few of the fixed Standards which they re- ceived from their own parents. I think it is in- teresting, in this context, that it was a 'progres- 'sive' newspaper which on Tuesday used the word 'yobs,' and called on its front page for heavy prison sentences on the !hell-raisers.' For it is under the influence of 'progressive' ideas, especially when they have been simplified in the process of popularisation. that parents have in- creasingly abdicated the difficult responsibilities involved in the moral authority of parenthood. The standards of behaviour which the youths and girls at Margate and Brighton are condemned for ignoring are precisely those which have for more

than a generation been most commonly derided.

Their aggressiveness and energy seem to be objectionable only because they are accompanied by such an extraordinarily thick-skinned lack of consideration for others: a lack of the kind of manners which the middle class has been derided for elevating in its homes and schools. The most objectionable forms which their violence has taken have been those which .would have been precluded by simple public school rules such as that you don't kick a man when he is down, or that you fight standing up with your bare fists, and not with your boots or a flick-knife. Their lack of respect for reasonable authority is hardly surprising when all reasonable authority (of a schoolmaster as much as of a policeman) is con- stantly `exposed' as corrupt or sadistic.

In a way, it was all summed up in one of the incidents over Whitsun, when some youths in- vaded and ripped fo pieces a Boy Scout camp. The contrast between the way in which the two groups of youths were spending the holiday is instructive enough. But how many hours have we all spent in deriding the Boy Scouts? (After all, it is a considerable fact that a knife is a proper part of a Scout's equipment and that he can be safely allowed one.) Adults had, indeed, an excuse for rage this week: not, however, at a handful of untypical youths and girls for caus- ing some local disturbances, but at seeing their own nakedness mirrored, however crazily. A generation which has been wilfully careless of traditional attitudes, sanctions and institutions suddenly found itself stripped of any possible reproof to those who have merely followed in its steps. A century of progressive ideas finds us contemplating gaol sentences and the hose for our children.